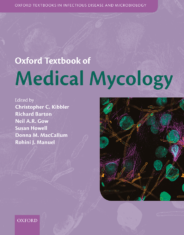 The spectrum of fungal disease has evolved exponentially over the past four decades, and so has the emergence of fungal diseases as an increasingly important problem in global healthcare systems. If a medical mycologist who had retired in the 1970s returned to the discipline today, they would inevitably find it irrevocably changed—almost unrecognisable.

International travel, climate change, and antimicrobial drug resistance have all contributed to the endemic range of fungal pathogens and their toll on our health. However, despite a general agreement that the mycoses are becoming more important, our understanding of the true magnitude of the burden posed by these diseases and their socioeconomic impact remains largely incomplete.

In the video series below, Professor Neil A.R. Gow gives an overview of medical mycology as a specialty, and explains why a new generation of mycologists will face various important challenges in order to keep the spread of fungal disease at bay in the 21st century.

What is medical mycology?

What are the different types of fungi that cause disease in humans?

The impact of anti-fungal drug resistance

The future of medical mycology

Neil A. R. Gow is a Professor of Molecular Mycology at the MRC Centre for Medical Mycology at the School of Medicine, Medical Sciences and Nutrition at the Institute of Medical Sciences, University of Aberdeen, Scotland. He is past-President of the British Mycological Society, the International Society for Human and Animal Mycology (ISHAM), and is current President of the Microbiology Society. Gow has published extensively on medical and general mycology. He is one of the editors of The Oxford Textbook of Medical Mycology, now available in print and online.