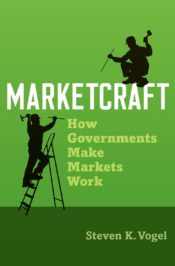 Whether we recognize it or not, “marketcraft” constitutes a core government function comparable to statecraft. By marketcraft, I refer to all the things governments do to make markets function and flourish, like corporate law, antitrust policy, intellectual property rights, and financial regulation. Marketcraft has profound implications for economic performance, social welfare, and national power – so we should want to get it right. We should seek to optimize marketcraft rather than to minimize government intervention.

Moreover, if we reframe government regulation as marketcraft, then we instantly dispel the common misperception that markets can thrive without governance. This, in turn generates more accurate analysis of market dynamics and more appropriate prescriptions for government policy. We should view government regulation less as a constraint on markets than as a prerequisite for competitive and dynamic markets.

The marketcraft frame views market reform as building market institutions, while the pervasive language of “liberalization,” “privatization,” and “deregulation” implies a process of removing obstacles. But liberalizing markets does not mean liberating them. In reality, it requires more state capacity, not less. It means more regulation, not less.

Consider the most dramatic examples of market reform, those of the post-Communist world. We have now experienced several decades of debate over the nature of the transition from a planned economy to a market economy. The crux of the debate hinged on whether market reform was primarily a matter of dismantling the old command system, or one of building the institutions to sustain a market economy. The latter view has now prevailed, both in the realm of scholarly analysis and  real-world experience. But from the marketcraft view, this should have been obvious from the outset.

Or consider market reform in developing countries. We have traversed several decades of controversy over the nature of the fundamental challenge and the appropriate solutions, sometimes depicted as a contest between the Washington Consensus and a more institutional perspective. And the latter view has now prevailed, after a protracted battle, countless flawed policies, and untold human suffering. But shouldn’t we have figured this out sooner?

Marketcraft has profound implications for economic performance, social welfare, and national power – so we should want to get it right.

The term we most commonly use to describe market reform in developed countries – deregulation – nicely illustrates the confusion. Deregulation  is typically used to depict a decrease in government regulation and an increase in market competition, as if two were natural associated. But enhancing competition most often requires more regulation. In network sectors, for example, incumbents are not likely to voluntarily cede their market power. So the government has to fabricate competition via regulation. In telecommunications, governments crafted competition via asymmetric (i.e. anti-incumbent) regulation, requiring officials to lease their lines to their competitors.

In developed countries, as elsewhere, insufficient attention to the institutional nature of markets has fostered policy errors, with devastating results. The causes of the 2008 global financial crisis are complex, multidimensional, and intertwined, yet the essence of the story boils down to a massive failure of marketcraft. Federal Reserve Chairman Alan Greenspan made this case rather poignantly, if inadvertently, in his famous recantation in testimony to Congress in 2008. “Those of us who have looked to the self-interest of lending institutions to protect shareholder’s equity (myself especially),” he conceded, “are in a state of shocked disbelief.” Pressed by Committee Chairman Henry Waxman on whether his laissez-faire ideology contributed to decisions that he regrets, Greenspan replied, “What I am saying to you is, yes, I found a flaw . . .”

The US authorities committed fundamental errors of marketcraft in the lead-up to the financial crisis. They gave financial institutions greater freedom to engage in risky behavior without strengthening regulation and oversight. In the 1990s, they chose not to regulate derivatives, complex financial instruments such as stocks and options that derive their value from some other underlying asset such as a commodity.  They did so partly because they viewed the derivatives market as an isolated arena for sophisticated investors, and partly because they feared that regulation would destabilize financial markets. They put too much faith in the ability of market players to self-regulate. And they failed to appreciate the degree to which the US mortgage-backed securities market had become plagued with misaligned incentives.

But marketcraft can generate successes as well as failures. After all, marketcraft produced the information revolution. The US government funded the research that produced much of the relevant technology, and provided early-stage capital for many of the most successful high-tech firms. US institutions, and the Silicon Valley ecosystem in particular, fostered the innovative start-ups that played a key role in commercializing the Internet, with innovations in devices, computing, transmission, and services. Antitrust policy played a less obvious but equally critical role by preventing vertically integrated firms like IBM and AT&T from dominating the emerging information technology sector. And this in turn enabled the open innovation characteristic of the digital economy. Regulatory reform brought lower communications costs, including flat-rate local service, which allowed startups to offer value-added services, and household consumers to experiment with new applications at a reasonable cost.

The financial crisis and the information revolution illustrate the enormous stakes in the game of marketcraft. The marketcraft realm is growing as a share of what governments do, and as a core element in how governments enhance or undermine the welfare of their people. Some of the core items on the marketcraft agenda – financial regulation, intellectual property rights, and the governance of the digital economy – are among the most consequential policy issues today, and will be even more critical going forward.

Steven K. Vogel is the Il Han New Professor of Asian Studies and a Professor of Political Science at the University of California, Berkeley. He is the author of Marketcraft: How Governments Make Markets Work.