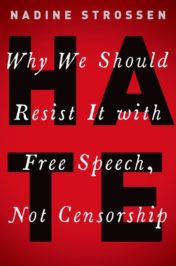 HATE: Why We Should Resist It with Free Speech, Not Censorship

Having been thinking, reading, speaking, and writing about “hate speech” over the last four decades, I had come to believe that I had nothing new to say, and that all arguments on all sides of the topic had been thoroughly aired.

That view began to change several years ago, as I started to see increasing activism on campus and beyond in sup­port of various equal rights causes. Having been a student activ­ist myself, I have been thrilled by the recent resurgence of student engagement. I have been disheartened, how­ever, by the fact that too many students and others have called for censoring speakers who don’t share their views, apparently believing that freedom of speech would undermine the social justice causes they champion.

Anecdotal reports, as well as polling data, forced me to recognize that neither I nor others who advocate robust free­dom of speech, as well as equal rights, had sufficiently explained our position. We clearly had not persuaded many students and oth­ers that equal justice for all depends on full freedom of speech for all.

A recent case in point: CUNY law students disrupted Professor Josh Blackman’s 29 March talk on “The Importance of Free Speech on Campus”—a special irony—with extended heckling, posters that declared “Fuck the Law,” and other epithets that could themselves be considered “hate speech.” (I use quotes because “hate speech” is not a legal term of art, with a spe­cific definition; rather, it is deployed to stigmatize and suppress widely varying expression. The term’s most generally understood meaning is expression that conveys hateful or discriminatory views against specific individuals or groups, particularly those who have historically faced discrimination.)

Having watched the video of the whole disturbing CUNY incident, I admire Professor Blackman’s handling of the disruptions with dignity, reasonableness, and a willingness to persist in speaking. But I was sad to see that the slogan-shouting students—future public interest lawyers!—apparently had so little confidence in their ability to express their disagreements via rational discourse. In contrast, I have great respect for the African American student who said he disagreed with Blackman and therefore was sitting in the audience in order to listen and respond to his views.

One reason for the CUNY students’ fury was that Blackman’s talk was sponsored by the Federalist Society, whose mission statement describes it as “a group of conservatives and libertarians interested in the current state of the legal order.” Even if one disagrees with some Federalist Society positions, it must be recognized that the group, to its credit, promotes debate and discussion of constitutional law issues. Moreover, some of its core founding principles could have come straight from the ACLU’s playbook: that “the state exists to preserve freedom”; and “that the separation of governmental powers is central to our Constitution.”

Some of the reasons why Professor Blackman was deemed persona non grata at CUNY Law School also apply to me (despite whatever “liberal” credentials might be attributed to me as the immediate past president of the ACLU). For example, I too have spoken about free speech issues at the behest of the conservative- and libertarian-leaning Federalist Society (whose events are often co-sponsored by the liberal-leaning American Constitution Society, which was founded precisely to serve as a counterweight to the Federalist Society).

It is important that we continue to engage in vigorous discussions about the appropriate limits on controversial speech, including what its critics denounce as “hate speech.” While these topics have been perennially debated, we must always consider pertinent new information. For example, recent evidence shows that comparable countries  that censor hate speech have experienced no decline in the amount of either hateful speech or discriminatory behavior;  to the contrary.

According to the European Parliament, hateful speech and bias crimes have increased in European Union countries despite their strong “hate speech” laws. In Germany, which has some of the strictest “hate speech” laws in the world—including laws against Holocaust denial—Chancellor Angela Merkel recently announced the country’s first-ever commissioner to combat anti-Semitism, in light of the dramatic rise in anti-Semitic attitudes, speech, and violence, especially among the young. In addition, the European Commission against Racism and Intolerance, an expert body that moni­tors implementation of European “hate speech” laws, reports that such laws threaten “to silence minorities and to suppress criticism, political opposition and religious beliefs.”

These findings are echoed in a report released in March by Article 19, the British-based organization that champions freedom of speech worldwide (taking its name from the free speech guarantee in the Universal Declaration of Human Rights). Based on a review of “hate speech” laws in six EU countries, the report concluded that these laws are “open to political abuse, including against precisely those minority groups that laws should protect.”

Recognizing the ineffectiveness of such laws, many European human rights advocates and agencies are now urging more reliance on America’s approach of counterspeech as the antidote to speech we deplore.

Will students and others calling for censorship of “hate speech” and cancellation of controversial campus speakers take heed of these arguments? Despite incidents like the one at CUNY, I have reason to be hopeful. Effective counterspeech has been increasingly utilized by minority students themselves, and by other people who are members of groups that are being disparaged.

In addition, resources for countering “hate speech” and bias crimes are abounding, with a wealth of information, train­ing, and organizations that empower all of us to speak up both for our­selves, if we are disparaged, and for others whom such speech targets. Also abounding are non-censorial measures for curbing the potential harm to which constitutionally protected “hate speech” is feared to contribute: discrimination, violence, and psychic injuries.

To be sure, campuses and other arenas in our society must strive to be inclusive, to make everyone welcome, especially those who traditionally have been excluded or marginalized. But that inclusiv­ity must also extend to those who voice unpopular ideas, especially on campus, where ideas should be most freely aired, discussed, and debated. Encountering “unwelcome” ideas, including those that are hateful and discriminatory, is essential for honing our abilities to analyze, criticize, and refute them.

Nadine Strossen is Professor of Constitutional Law at New York Law School and the first woman national President of the American Civil Liberties Union, where she served from 1991 through 2008. A frequent speaker on constitutional and civil liberties issues, her media appearances include 60 Minutes, CBS Sunday Morning, Today, Good Morning America, The Daily Show, and other news programs on CNN, C-SPAN, Fox, Al-Jazeera, and in Australia, Britain, Canada, France, Germany, Italy, and Spain. Her op-eds have appeared in The New York Times, The Washington Post, The Washington Times, and USA Today, among others. Nadine is the author of HATE: Why We Should Resist It with Free Speech, Not Censorship, published by Oxford University Press.

Was Spinoza a populist? [Long read]