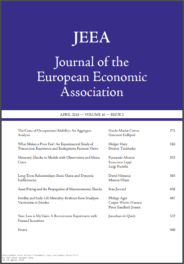 Suppose you write an email to a school district or a library asking for information about enrolling your child to the school or becoming a library member. Do you expect to receive a reply? And do you expect this reply to be cordial, for instance including some form of salutation?

It turns out that the answers to the two questions above depend on what your name is and on what it embodies. In a field experiment whereby we send emails signed by fictitious male senders to almost 20,000 local public services in the US, we document that requests of information sent by “Jake Mueller” or “Greg Walsh” received a response in 72% of the cases, with around three quarters of these responses being cordial. Identical requests sent by “DeShawn Jackson” and “Tyrone Washington” – two distinctively African-American names – receive instead a response only in 68% of the cases, with only around two thirds being cordial.

The different responsiveness to “black names” as opposed to “white names” is present in all macro-regions of the US (North-East, Mid-West, South, and West). The gap is particularly sizeable for sheriffs (with a 7% points lower response for “black names” compared to 53% response rate for “white names”) but is also present for school districts and libraries. For county treasurers there is a sizeable difference, albeit not statistically significant, while for services with a smaller sample size (job centres and county clerks) we do not find evidence of differential treatment.

How to interpret these differences? Are they truly the result of racial discrimination? We use several approaches to address this point and exclude what is usually labelled as “statistical discrimination”. This type of discrimination could arise in our context if, for instance, public services were less prone to interact with people from a low social background and would use race to infer the socio-economic status of the sender. If this type of discrimination were present, for example, the recipient could attribute a higher socio-economic status to Jake Mueller than to DeShawn Jackson, because in general white people are wealthier than black people. This, admittedly, would not be commendable behaviour from public services but would be distinct from racial discrimination.

Several pieces of evidence point to the fact that what we document has to do with racial prejudice. First of all, we show that the difference in response between white and black senders is smaller in counties where the share of African-Americans among employees in the public sector is higher. The same pattern is observed when the recipient has a surname that is typically African-American. Moreover, in a second wave of emails, we add information about the socio-economic background of the sender by adding the sender’s occupation (real estate agent) below his signature. The fact that the gap in responsiveness in the second wave is identical to the first wave suggests that it is not attributable to the socio-economic status that the name might signal, but rather to racial discrimination. We also find that the differential response rate is positively correlated with other measures of racism used in previous studies, such as the prejudice index of Charles and Guryan (based on answers to questions on racial prejudice in the General Social Survey), the racially charged search rate of Stephens-Davidowitz (based on Google search data), and the race implicit association test created within the Harvard Project Implicit.

That requests of information coming from African-Americans are more likely to be ignored is not simply a nuisance, as there is growing evidence showing, for example, that citizens who are more informed about a certain public service are more likely to access or make use of that service. Moreover, the medical and psychological literature documents the physical and mental health effects of so-called racial micro-aggressions, that is, subtle everyday experiences of racism. For instance, the cumulative experience of derogatory racial slights can give rise to anxiety or diminished self-esteem.

How to solve this issue? Explicit discrimination by public service providers is is already illegal, so there is no quick legislative fix available. Recruitment practices may play a role, given our finding that discrimination disappears as recipients become more likely to be African-Americans. If what we find is due to an implicit – and possibly unconscious – bias, then making public officials aware of it may go some way in addressing the problem. In this case, academic studies, like ours and the media attention that they often attract, may be part of the solution.

They are the authors of “Racial Discrimination in Local Public Services: A Field Experiment in the United States” in the Journal of the European Economic Association.