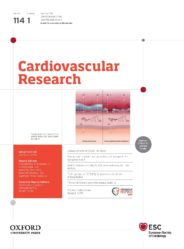 Cardiovascular Research is the international journal of the European Society of Cardiology for basic and translational research, spanning all topics within cardiology and cardiovascular biology. The journal aims to enhance insight into cardiovascular disease mechanisms and the prospects for innovation. The journal welcomes submission of papers both at the molecular, sub-cellular, cellular, organ, and organism level, and of clinical proof-of-concept and translational studies. Manuscripts are expected to provide a significant contribution to the field with relevance for cardiovascular biology and diseases.

Each successful beat of the heart is the result of a well-timed electrical orchestra, headed by a conductor tasked with tirelessly maintaining this life-sustaining rhythm. The conductor of this silent symphony is the heart’s natural pacemaker cells, which synchronize the muscular contractions necessary to pump blood throughout the body.

Cardiac rhythm was described as early as 2,500 years ago in the writings of Chinese physician of legend, Bian Que. Similarly, the influence of electricity on heart rhythm is by no means recent knowledge. When this rhythm becomes irregular, that is to say, the orchestra ceases to follow the conductor, it is known as arrhythmia. A common example of this is atrial fibrillation, or AF, which affects in excess of 33.5 million patients worldwide manifesting as an abnormally fast, erratic heartbeat. Individuals may experience chest pain, feeling lightheaded, shortness of breath, or indeed, nothing at all.  Over time, AF can contribute to heart failure, stroke, dementia and ultimately premature death. It is not surprising that research into new treatment approaches are a billion-dollar, ever-growing industry.

As is often the case in medicine, management of AF is a balance of curative versus intolerable or damaging effects.

Electronic defibrillators, first conceived over 50 years ago, have been a marked success in restoring normal cardiac rhythm when it goes awry. The device is a truly life-saving technological leap forward.

Unfortunately, by way of their operation, such devices deliver an electrical shock that can often cause considerable pain and distress to the user. In addition, the need for physical wires to transmit this shock is subject to anatomical limitations in their placement and albeit rare, the very serious risks surrounding wire extraction and infection. Given such disadvantages, new therapies for AF are being actively pursued.

Enter light: the familiar ally of the medical professional, with applications from radiation therapy to medical imaging, and now illuminating a possible route to modulate cardiac rhythm in conditions like AF without the difficulties of an implantable defibrillator.

In the past decade, a technique known as “optogenetics” has emerged onto the biological scene as part of the life sciences toolkit. Optogenetics has enabled researchers to sensitize specific cells to light in order to trigger various responses. To do so, a special class of light-sensitive proteins called opsins are utilized, which are normally found in photosensitive algae and the eyes of animals.

In neuroscience, where the technique originated, optogenetics has greatly enhanced the investigation of brain function and connectivity. For example, it is now possible to activate specific clusters of neurons within the amygdalae of mice in response to light, setting off a fear response. The benefits of optogenetics for treating AF and other cardiac arrhythmias are easy to imagine; by sensitizing heart muscle cells to respond to a particular wavelength of light, light takes the place of the electric shock used by defibrillators to restore an irregular rhythm. In this way, light becomes the conductor of the cardiac rhythm. This has the potential to offer painless, sustained correction of arrhythmias in a more evenly spread manner compared to the focal points of an electric wire.

Researchers tested the viability of an optogenetics-based treatment for AF in mice whose heart muscles were poised to contract in response to blue light. After delivering the special light-sensitive proteins to the hearts of mice at risk for AF using gene therapy, the authors could reliably correct arrhythmias at the flick of a switch by applying high-intensity pulses of blue light directly to the heart. The authors proposed that this worked by holding the heart muscle cells in a kind of stasis, thereby preventing them from contracting to the irregular rhythm. Once the burst of light ceases, cardiac rhythm has an opportunity to resynchronize. Should this be the case, the long-term implications on heart muscle function remain to be seen.

Looking forward, a light-based strategy to fight arrhythmia might change treatment plans for the millions suffering from conditions like AF. Future studies in large animals more similar to humans should assess the safety and efficacy of delivering these special light-sensitive proteins – by gene therapy or otherwise.  What is clear from this early work is that the necessary elements for a pain-free, light-based defibrillator are feasible and may provide a light at the end of the tunnel for AF research.

Cardiologists and nephrologists – the importance of collaboration