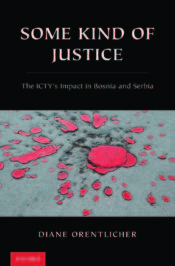 Some Kind of Justice: The ICTY's Impact in Bosnia and Serbia

Much as a single discovery can transform science, paradigm shifts in international law can emerge with astonishing speed. Twenty-five years ago, the UN Security Council sparked such a shift when it created a war crimes tribunal to punish those responsible for “ethnic cleansing” in the former Yugoslavia.

At first widely dismissed as a fig leaf for the UN’s failure to halt ethnic violence in the heart of Europe, the International Criminal Tribunal for the former Yugoslavia (ICTY), based in The Hague, soon became the leading edge in a new era of international justice. After a shaky start, it garnered global admiration as it revamped the law of humanity, born in Nuremberg in another moment of tectonic change. The Tribunal’s stature grew exponentially, too, when former Serbian dictator Slobodan Milošević was dispatched to The Hague in June 2001. Meanwhile, other tribunals were created in the wake of genocide in Rwanda and atrocities in Sierra Leone and elsewhere; in 2002, a permanent International Criminal Court (ICC) opened for business.

But in recent years, the great-power consensus underpinning this phenomenon has frayed. Several factors account for this, of which the most formidable have little to do with the merits of war crimes courts (see: veto by Russia and China of a draft resolution that would have referred Russian ally Syria to the ICC). One, however, may be growing doubts about the cost and value of global justice. True, skeptics note, the ICTY and other tribunals have generated path-breaking jurisprudence. But in the face of grievous violence in Syria and elsewhere, what good does that do?

Yet a closer look at the record of the ICTY, which closed in December after operating more than 24 years, suggests war crimes tribunals can have a profound impact—but not necessarily in the ways we expected. The challenge today is to know what they can deliver and, just as important, what tasks they are ill-suited to achieve.

What, then, does the ICTY’s record teach us?

First, and unexpectedly, the ICTY showed us how international tribunals can catalyze domestic prosecutions that would never have taken place otherwise. Years after it was launched, the Hague Tribunal made concerted efforts to shore up Bosnia’s judiciary, though hardly for enlightened reasons. Under pressure to wind up its work, Tribunal officials sought a partner to which it could send some of its cases. Although it made no similar effort in Serbia, whose wartime government had plunged the region into crisis, the ICTY catalyzed war crimes trials there without even trying. To its credit, the Tribunal’s Prosecutor seized the opportunity that emerged in both countries, pioneering new programs to bolster local war crimes institutions.

…the ICTY showed us how international tribunals can catalyze domestic prosecutions that would never have taken place otherwise.

These innovations are well worth emulating by the ICC, whose Statute contemplates a dynamic relationship with local courts. Such an investment could pay rich dividends: recent social science research suggests that domestic prosecutions for past depredations “have a strong and statistically significant” correlation with improved human rights conditions in countries recovering from horrific violence.

Second, we need to stop claiming international criminal courts will have a transformative impact on social beliefs (see, for example, U.S. Ambassador Madeleine Albright’s statement that “only the truth”—which the ICTY would establish—“can cleanse … ethnic and religious hatreds and begin the healing process” in the former Yugoslavia, or the first ICTY president’s description of the Tribunal as “a tool for promoting reconciliation and restoring true peace”). With nationalism on the rise in Serbia and Bosnia, it is abundantly clear the ICTY did not have this effect.

A rich body of social science literature helps us understand why we never should have expected it to—and why we did a disservice by claiming the ICTY would stimulate general acknowledgement of contested facts and remorse for past harms. Psychological dynamics that operate in the most prosaic spheres of human endeavor—in particular, a human propensity to discredit information that challenges our collective self-esteem, our habitual reliance on trusted sources to interpret reality, and our resistance to information at odds with established beliefs—were at play in post-Milošević Serbia and postwar Bosnia. Similar dynamics are likely to operate in many countries, where basic norms of human decency have been so thoroughly debased as to give rise to war crimes prosecutions.

This does not, however, mean war crimes trials are incapable of advancing social acknowledgment of past wrongs. In fact, during periods of robust engagement in Bosnia and Serbia by influential actors, like the United States and European Union, the ICTY’s work helped empower political reformists and advance accountability. It is now abundantly clear such engagement may be necessary far longer than most governments are inclined to provide it.

Third, and most important, international tribunals can deliver a precious measure of justice for those who endured grievous harm. To be sure, victims in Bosnia, which saw the highest levels of ethnic violence during the 1990s Yugoslav wars, recite a litany of criticisms of the ICTY’s performance: trials took too long, sentences were too short, some defendants transformed the courtroom into a platform for hateful propaganda, and on and on. But in their view, flaws in the Tribunal’s performance are not the same as failure in its mission. In research interviews over almost a decade, when I asked Bosnians if it was a mistake to have created the Tribunal, they virtually always responded without hesitation: “Of course not! Without the Tribunal we would never have received justice.” While difficult to capture in the hard metrics of impact analysis, this achievement could not be more precious.

Fifty-five years ago Hannah Arendt observed that, “the question most commonly asked about the Eichmann trial” in Jerusalem was, “What good does it do?” After 25 years of sustained efforts to prosecute contemporary war criminals, her response still rings true: “It will do justice.”

Diane Orentlicher is Professor of International Law at American University, and has been described by the Washington Diplomat as "one of the world's leading authorities on human rights law and war crimes tribunals. She is the author of Some Kind of Justice: The ICTY's Impact in Bosnia and Serbia.