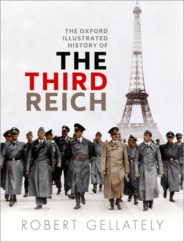 The Oxford Illustrated History of the Third Reich

Historians today continue raising questions about the Third Reich, especially because of the unprecedented nature of its crimes, and the military aggression it unleashed across Europe. Much of the inspiration for the catastrophic regime, lasting a mere twelve years, belongs to Adolf Hitler, a virtual non-entity in political circles before 1914. The timeline below, created from The Oxford Illustrated History of the Third Reich, charts a few key events, focusing particularly on the early foundation years of the Third Reich.

Feature image credit: Cathedral of Light at the Reichsparteitag in Nuremberg, 8. September 1936. CC-BY-SA 3.0 via Wikimedia Commons.

Robert Gellately is the editor of the The Oxford Illustrated History of the Third Reich. He is Earl Ray Beck Professor of History at Florida State University. His publications have been translated into over twenty languages and include the widely acclaimed Lenin, Stalin, and Hitler: The Age of Social Catastrophe (2007), Backing Hitler: Consent and Coercion in Nazi Germany, 1933-1945 (2001), and Stalin's Curse: Battling for Communism in War and Cold War (2013).