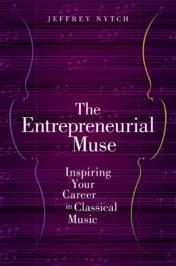 The Entrepreneurial Muse: Inspiring Your Career in Classical Music

“Entrepreneurship.” It’s such a troublesome word, partly because it’s been overused and misapplied such that it’s become a buzz-word—which is never conducive to clarity of meaning or purpose. But it’s also a difficult word to get our hands around because it has many different meanings and can play out in so many ways. So what is it about entrepreneurship that I feel is so important for us in classical music to embrace?

I can remember quite clearly the moment when I began the path towards entrepreneurship: that moment when you realize you have to change the way you’ve been thinking about things and the way you’ve been approaching a problem. For me, that moment occurred when I was working at a concession stand at The University of Texas events center, scooping popcorn for patrons who hardly noticed me, much less cared about who I was or what my circumstances were. I was a food dispenser, and that was all.

The year was 2001, two months after 9/11. I was seven years out of my DMA in composition from Rice University, had already had my Concerto for Clarinet and Orchestra recorded by Richard Stoltzman and the Seattle Symphony, and had a chamber orchestra piece performed at Lincoln Center. I had been sure those milestones would soon open more doors, and I was confident my career was about to take off; it was only a matter of time before my name was gracing concert programs from coast to coast.

And then I hit a wall. The commissions dried up, the performances slowed to a trickle. I began to feel like I was losing my creative voice. A crisis ensued, one that was as much personal as it was professional. I didn’t realize at the time that what while I was a musician, I was not yet an entrepreneur.

By the time I had finished my degree program at Rice, I had decided that an academic career was not for me. My teachers were appalled: after all, what does one do with a doctorate in music composition if not become a college professor? But I was adamant that I was going to make my living as a working musician—composing and performing were to be my sole activities, undiluted by teaching or any other institutional distractions.

My mentor at Rice, Paul Cooper, was dubious. The day I came to his office to announce my decision felt momentous to me, as if I were announcing a break-up or sharing a dread diagnosis. I delivered my speech, well-rehearsed, and then the room was quiet for some time while he sat there in his leather chair, puffing away on his cigarette, his eyes reflecting deep thought. Finally, exhaling a cloud of smoke, he looked up at me and quietly said, “Well, Jeff, if anyone can do it you can.”

So what’s the missing piece? What we need is entrepreneurship.

So I jumped off the cliff—and seven years later here I was, scooping popcorn for basketball fans attending a game I couldn’t even watch.

And in that moment, I knew: something had to change. I could no longer tell myself that if I just continued to persevere that things would somehow turn around.

This story is hardly unique; I’m sure many readers will be able to relate to their own version of it. Sometimes it feels like we were set up: our education trained us to be the finest musicians we could be, but nothing else. Perhaps we were stars at our respective institutions, hailed by our teachers as one of the special talents who were destined for a prominent career, and this gave us a false sense of how easy it would be to win over the wider world. But once that initial post-graduation boost was spent, a cold reality hit: we had no idea what to do next. Faced with no other alternative, we take a day-job that eats up our time and saps our energy, making the whole enterprise of building a music career even more challenging. Many of us end up leaving music altogether.

Sound familiar? If so, you’re not alone.

So what’s the missing piece? What we need is entrepreneurship.

For starters, entrepreneurship is not, fundamentally, about making money. It’s based on the principle that the value of something resides in its benefit to someone else. If we want to unlock value for our work, we have to first understand the needs and sensibilities of our would-be customer (or our hoped-for audience) and then create a way to meet those needs through what we have to offer. Entrepreneurship is about enabling art’s deepest, most valuable purpose: connecting with people, creating community, challenging us to view the world from new and different perspectives, and stirring the soul. It’s about empowering artists with the tools they need to release the value of their work by connecting it with a market that desires it. And when it’s done well, entrepreneurial action exists harmoniously within the artist’s creative life, each side fueling creative insights for the other.

In the end, selling popcorn helped me through a rough patch in my life. But it was not an activity I wanted to keep as part of my career portfolio. Yet it shows just how entrenched we are when it comes to our career options and what it takes to develop them I had to find myself in the middle of every musician’s worst nightmare—doing something menial and completely divorced from one’s training and passion, just to survive—before I began to look at my artistic life through a new lens. Once I began to explore entrepreneurship, I discovered not only a more diverse palette of potential careers, I discovered that it could open up new creative possibilities as well.

Jeffrey Nytch is Director of the Entrepreneurship Center for Music and Associate Professor at The University of Colorado - Boulder. He is the author of The Entrepreneurial Muse: Inspiring Your Career in Classical Music.

Five ways entrepreneurship is essential to a classical music career