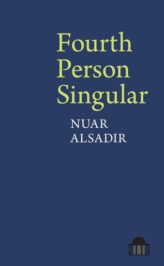 The Oxford Dictionary defines poetry as a piece of writing expressing feelings and ideas that are given intensity by particular attention to diction. Poetry at its core is a uniquely personal form of expression. To honor National Poetry Month, we’re sharing what poetry means to the writers of the Pavilion Poetry Series, including a sample from Nuar Alsadir’s new collection Fourth Person Singular. Maybe it will inspire to explore what poetry means to you.

Jodie Hollander, poet of the collection My Dark Horses — a body of work that celebrates the separateness and connectedness of human experience in relationships, and our capacity to harm and love.

“For me, a good poem possesses two essential qualities: musicality and an expression of emotion. Not only is musicality vital in distinguishing poetry from prose, but the tempo, meter, and flow of a musical poem creates a strong sense of enjoyment for the reader. The expression of feelings is the second vital part of a good poem. Whether the emotion is readily on the surface, or buried deeper in the work, good poetry grapples with some expression of feeling. Through both music and emotion, poetry has the capacity to reach people deeply and tap into the essence of our humanity.”

Hollander, originally from Milwaukee, Wisconsin, was raised in a family of classical musicians. She studied poetry in England, and her poems have appeared in journals such as The Poetry Review, PN Review, and The New Criterion, among many others.

Alice Miller, poet of the collection Nowhere Nearer — poems that look at how we forge our worlds from the stories of the dead, the illusion of progress, and “the futures we never let happen.”

“I grew up an atheist and I’ve never managed to believe in gods. For me poetry is the closest we ever come to challenging death. Poems create a hypothetical space, a counterfactual space, where impossible pasts, presents, and futures can coexist inside a kind of music.”

Miller is a Berlin-based New Zealand poet, graduated from the Iowa Writers’ Workshop and the International Institute of Modern Letters. Her work has appeared in Boston Review, Oxford Poetry, Poetry London, The Rialto, and The American Scholar. Nowhere Nearer is her second collection.

Ruby Robinson, poet of the collection Every Little Sound — a celebration of the separateness and connectedness of human experience in relationships, and our capacity to harm and love.

“Sometimes, I like to think of poetry as a kind of resonance; things and beings chiming with one another, creating a special sense of meaning, or enactment, or vibrancy. It could be a child describing a forest, or the anecdote shared between two people on a bus, a serendipitous moment, a feeling of intuition or a coincidence. It could be song lyrics, nursery rhyme, bird song, a heartfelt rant. The beauty of poetry is its limitless potential to spark connections and new understanding without the reductive laws of other forms of language; in a poem, anything can happen.”

Robinson was born in Manchester, England. She studied English literature at the University of East Anglia and is a graduate of the Sheffield Hallam University Writing MA. This is her debut poetry collection.

An excerpt from Fourth Person Singular by Nuar Alsadir

A man entered the subway car at Borough Hall,

was about to sit, but just as his knees began to bend

the train jerked into motion. He stood up, as though

regaining composure after a brief humiliation,

as though it were somehow shameful to be subject

in its grips, an object controlled by physics.

Alsadir is a poet, writer, and psychoanalyst. Her poems and essays have appeared in numerous publications, including Granta, The New York Times Magazine, Slate, Grand Street, the Kenyon Review, and Poetry Review, among others. Her latest collection Fourth Person Singular was shortlisted for the 2017 The National Book Critics Circle in Poetry.

More about the series: Published by Liverpool University Press, Pavilion Poetry seeks to publish the very best in contemporary poetry. Always international in its reach, Pavilion Poetry is poetry that takes a risk. Whether by new or established and award-winning writers, this is poetry sure to challenge and delight. Titles distributed by Oxford University Press in North America.

Lyricism as activism: Sigurd Olson and The Singing Wilderness