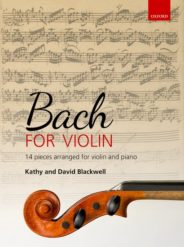 Bach for Violin: 14 pieces arranged for violin and piano

If composers and arrangers have long reworked the music of Johann Sebastian Bach, they have followed the lead of none other than the composer himself, for Bach was an inveterate transcriber of his own music and the music of others. For solo organ Bach transcribed Vivaldi’s Concerto for two violins Op. 3 No. 8, while his G major Concerto BWV 592 acknowledged the musical efforts of Prince Johann Ernst, nephew of his employer at Weimar, discreetly tidying and improving details in the process. Bach’s great Mass in B minor is a compilation of his earlier compositions, while the exuberant opening sinfonia of Cantata No. 29 is an expansion of the Prelude from his E major Partita for solo violin.

From soon after Bach’s death composers picked up the challenge, transcribing and adapting Bach’s music to create new works of their own. Some of these are faithful transcriptions, merely taking Bach’s music and re-scoring it for other instruments, as for example Mozart’s arrangements of fugues from The Well-Tempered Clavier for string quartet, K 405, or Samuel Wesley’s transcriptions of the Trio Sonatas for Organ, which simply give each of the three lines of the original to three hands at one piano. Such adaptations brought the original music to a wider audience and perhaps enabled a deeper appreciation of it – if contrapuntal lines can become obscured on the relatively monochrome palette of a keyboard instrument (especially the unvarying tones of a harpsichord or organ), then they could be heard much more readily separated out onto different instruments or performed by different players.

For other composers the temptation to embellish the original proved too strong. Schumann’s piano accompaniments to the six cello suites fill out the implied harmonies on the piano, but at least in textures more sparse and with more respect for Bach’s harmony than the full accompaniments to the same pieces by his compatriot Friedrich Stade.

From the mid-19th century comes an even more famous example, Gounod’s Ave Maria: Meditation sur le 1er Prélude de J. S. Bach. Originally published for violin (or cello) and piano and harmonium, with a later sung version adding the “Ave Maria” text, this ingeniously took Bach’s C major Prelude from Book 1 of The Well-Tempered Clavier and used it as the accompaniment to a newly composed melody. Gounod attempted to repeat the trick later in his life, adding a melody to Bach’s Lute Prelude BWV 999 to create a second “Ave Maria,” but this lacks the melodic grace of its predecessor – there are very few Bach pieces simple enough also to work satisfactorily as accompaniments.

From the same period we have Franz Liszt’s transcriptions of Bach music (often organ compositions) for piano, with left-hand octaves mimicking the organ pedals, and virtuosic figuration in the right hand scooping up much of the writing for manuals. This approach reached its apogee 50 years later in the transcriptions of the Italian pianist Ferruccio Busoni, who in a multi-volume series spanning some 30 years published his piano adaptations of Bach’s keyboard music. Using the whole range of the keyboard, and with passages doubled in octaves and sixths, these employ the full panoply of the piano’s capabilities to capture the grandeur of Bach’s originals.

Twentieth-century composers are no exception to those eager to adapt Bach’s music. An unlikely duo of Elgar and Schoenberg both orchestrated organ works by Bach, with very different results. Bach’s music has also been the inspiration for jazz musicians, from Django Reinhardt comping energetically to violinists swinging the opening movement of the double violin concerto, to the many improvisations of Jacques Loussier.

It is perhaps a mark of the respect musicians have for Bach’s music that so many have used it as the basis of new works, and it is a tribute to its strength that it can withstand this adaptation and remain recognisably itself. The foundation of Bach’s music is a logical counterpoint driving individual lines set within clear harmonic structures, and as such the component parts can readily be redistributed amongst other instruments, even as the arranger adds details and fingerprints of their own. It’s hard to imagine musicians will ever lose their fascination for this most inspirational of composers.

David Blackwell and Kathy Blackwell are the co-authors of the well-loved Fiddle, Viola, Cello, and String Time series of books for young string players. Their latest publication, Bach for Violin: 14 pieces arranged for violin and piano, is published by Oxford University Press.

Playing Bach on the violin