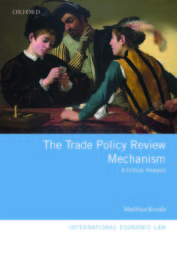 As of late, the Multilateral Trading System has been beset by several serious agonies. The symptoms have been obvious. The 11th Ministerial of the World Trade Organization (WTO), which took place in December 2017 in Buenos Aires, has demonstrated that the WTO’s rule-making function is no longer performing as expected: with the exception of a shared willingness to collectively and constructively work further on the issue of disciplining fishery subsidies, it did not result in any new normative multilateral outcome. Likewise, the WTO’s dispute settlement function has been affected by a stalled selection process for its new judges. If this situation persists, the WTO might cease to be the Multilateral Trading System’s final legal arbiter.

In so far as symptoms hide deeper afflictions, the WTO’s functions in the normative context and in the field of dispute settlement will probably need deeper diagnosis and long-time reflection in order to get member states’ institutional remedies right. In the short term, it might therefore be easier to start by refocussing on the WTO’s third function: transparency.

There was a time when the WTO’s main forum for transparency—its Trade Policy Review Mechanism, which periodically analyses member states’ trade policies and practices—was considered to be one of the two “Crown jewels” of the WTO (its Dispute Settlement Body being the other). However, that was a time when multilateral trade was not yet eclipsed by plurilateral, regional, or bilateral trade deals or initiatives. It was also a time when the WTO member states still clearly appreciated the WTO’s added value in terms of trade transparency. As the sixth and last appraisal of the Trade Policy Review Mechanism (2017) demonstrates, member states still do (as the continued relevancy of the mechanism shows), but they are seemingly not willing to pay any longer for the institutional consequences of an increased periodicity or deepened review of the Trade Policy Reviews. The political importance of the WTO’s main forum for transparency has therefore gradually withered over the years.

It is therefore time to start re-polishing the Trade Policy Review Mechanism.

It is therefore time to start re-polishing the Trade Policy Review Mechanism; not only because it is probably easier from an institutional perspective to organize increased transparency (a permanent need on which all WTO members still seem to agree) than to provide further WTO rulemaking or adjudication to the respective interest and shared acceptance of all (economic interests of WTO members change), but also because the WTO’s transparency function seems to logically precede its two other functions. Although the findings of the Trade Policy Reviews have no institutional bearing on the WTO’s dispute settlement, members have often tried to skew the line between transparency and compliance and attempted to use the WTO transparency function’s findings in disputes. Likewise, new trade issues or topics that still have no normative standing in the WTO (such as competition) often first appear in the context of the members’ Trade Policy Reviews long before these issues lead to new multilateral or plurilateral deliberations or norm-setting.

If it is easy and logical to refocus the WTO members’ political attention on revamping and revitalising the Trade Policy Review, the question arises whether members can and will do so. Whether they can will often depend on their available budget. In this regard, the historical and actual settings of the Trade Policy Review Mechanism show that it is possible to do more with less, simply by reorganising the institutional settings and scope and depth of reviews. Whether WTO members will effectively revamp and revitalise the Trade Policy Review is of course up to them. History however suggests that crisis (a situation for which the current state of play in the context of Multilateral Trading System probably qualifies) often leads to the greatest breakthroughs. Moreover, actuality suggests that even amongst the sceptical members of the WTO, increased WTO transparency is now sought after as a matter of priority.

Contrary to its two other functions, the WTO’s Trade Policy Review Mechanism is not sick. It only seems to suffer under a symptom of member states’ complacency with a relatively well-working system, which resulted in a gradual withering away of the mechanism’s political and economic importance. It is therefore time to re-polish the WTO’s second Crown jewel in order to provide a transparent future for the WTO.

Featured image credit: ‘Map of states which have submitted an application to join the World Trade Organization.’ by Happenstance. Public domain via Wikimedia Commons.

Dr. Mathias Kende is a Belgian career-diplomat, who currently serves as the Belgian Deputy to the European Trade Policy Committee of the European Council. He is the author of The Trade Policy Review Mechanism: A Critical Analysis, published by Oxford University Press.

Responding to the rise of extremist populism