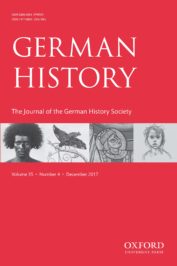 German History is renowned for its extensive range, covering all periods of German history and all German-speaking areas. Issues contain refereed articles and book reviews on various aspects of the history of the German-speaking world, as well as discussion fora, reflections, and review essays.

When, at one point in 2008, Nancy Wingfield approached me with the idea that I should write a paper about prostitution in Theresienstadt, I had no idea what I was getting myself into. That was probably for the best, because before long, I was confronted with hostile, personal attacks from survivors, which demonstrated quite clearly how sensitive the topic was. It was no accident that Wingfield is a historian of sexuality rather than a Holocaust historian: as I found out, sexuality and the Holocaust, while a topic of immense public interest, is a field that makes people profoundly uncomfortable.

In 2016, Elissa Mailänder and I decided to address the intersection of sexuality and the Holocaust in a roundtable at the German Studies Association, which we later turned into a forum in German History with Doris Bergen, Atina Grossmann, and Patrick Farges. Our conversation took as a point of departure the Simon Watney’s statement, quoted in Dagmar Herzog’s History of Sexuality in Europe, about the “much of muchness” that sexuality bears. In sexuality, we can observe how society expresses and enforces its key cultural values; studying gender and sexuality gives us tools to examine the dynamics of unequal relationships and the stabilizing and destabilizing effects of intimacy. Illustrating the latter point, Bergen brought up the iconic moment in Gitta Sereny’s Into that Darkness, when it was Theresa Stangl’s providing of support and physical love that enabled her husband to carry on as commandant of two camps of Operation Reinhard.

To this day, when we speak about sexuality and the Holocaust, most will automatically zoom in on sexual violence against Jewish women. Thanks to the work of Herzog, Helga Amesberger, Regina Mühlhäuser, Birgit Beck, Robert Sommer, Monika Flaschka, and others, we are well informed about its prevalence, impact, and logic. In particular, Mühlhäuser’s study of both enforced and consensual relationships on the Eastern front set a high standard in theorizing and making sense of sexual violence. Today, sexual violence is an accepted part of study of the Holocaust, addressed in exhibitions as well as general Holocaust histories.

And yet, the implementation is frequently frustrating: often, sexual violence is employed to titillate the reader, or worse yet, as the clichéd “add women and stir.” Photographs of raped women are presented without any context, victims are mentioned as heaps of flesh, gang-raped in the last minutes of their lives (Timothy Snyder’s chapter of Death Factories from Bloodlands comes to mind). Elissa Mailänder showed how difficult, indeed impossible, it is to have empathy with people about whom all we learn about is that they were sexually assaulted, raising the key issue of historian’s ethics in writing about sexual violence.

“Studying gender and sexuality gives us tools to examine the dynamics of unequal relationships and the stabilizing and destabilizing effects of intimacy.”

These difficulties in addressing sexuality and gender stem from the fact that Holocaust studies still struggles with gender history being taken as a valid, central line of inquiry. To some collegues (usually men), there is still a notion of gender history as niche, of not being part of the “real questions” and “hard facts.” It is interesting, if sad, that some of this patriarchal bias repeats in queer history, which too often turns into gay men writing about gay men. A good example of the condescention towards the experience of lesbian women during Nazi Germany is the ongoing struggle to commemorate women persecuted as lesbians at Ravensbrück Memorial. Moreover, Samuel Huneke’s publicized recent article on lesbian women facing the Berlin Gestapo argued for “an unmistakable and thoroughgoing toleration of lesbianism in Nazi Berlin.” Huneke claimed to be the first one to work with these cases—disregarding the research by Ingeborg Boxhammer and Camille Fauroux . Boxhammer’s and Fauroux pioneering, painstakingly researched studies came to very different conclusions, demonstrating the manifold ways in which lesbians were endangered. Do we only take note of historical findings when presented by a male historian?

The key characteristic of queer history is in its innate subversivity: of reading sources against the grain, recognizing how the Holocaust changed gender norms, sometimes turning them upside down. In my work, I explore Jewish Holocaust victims who engaged in same sex desire, and the surrounding homophobia of the prisoner society. Cornelie Usborne works on the often exploitative relationships between German housewives and French forced workers and POWs, where the women coaxed the French into intimacy. Topics like these are steeped in stigma: understanding which sexual conduct generates shame and taboo is currently being heavily explored in research. Annette Timm’s edited collection on Ka-Tzetnik is a significant contribution to our understanding how postwar public sexualized the Holocaust. The work of the Czech American Holocaust survivor novelist Arnošt Lustig is waiting for a critical analysis.

When Marie Jalowicz Simon’s memoir of life in hiding came out, readers were captivated by her matter-of-factly depiction of bartering her survival for money, help, affection, and sex: recognizing that sex was a currency, and one currency among others, is key. Finally, and to come back to the beginning, historians of the Holocaust and Nazi Germany are still profoundly uncomfortable in analyzing prostitution beyond sexual violence. Only Zoe Waxman’s and Maren Röger’s books are two prominent recent examples. It is hard and sometimes confusing to recognize women’s agency in these usually enforced, violent situations. The subversive, explosive value of Jalowicz and Molly Applebaum’s accounts is that to a discerning reader, women’s choice, limited but legitimate, is there in plain light. With that, we can ask: what does it mean? Only then we can set out to understand the society brought about by the Holocaust.

Dr. Anna Hájková is Assistant Professor of Modern Continental European History at the University of Warwick. She co-organized the conference Sexuality, Holocaust, Stigma: Taking Stock. Hájková is one of the authors of the Forum on "Holocaust and the History of Gender and Sexuality," an article published by the Oxford journal German History. She can be found on Twitter @ankahajkova.