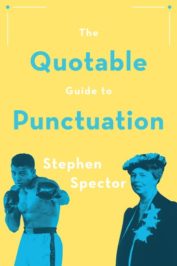 The Quotable Guide to Punctuation

It seems long ago now, but in his victory speech in 2016, Donald Trump promised to unite us as a nation. He finally has, at least around one issue: nearly seven of every ten Americans wish he would stop tweeting from his personal account. According to a recent Quinnipiac poll, that even includes a majority of Republicans. Melania, who says that she abhors the negativity and bullying of social media, said on 60 Minutes that she rebukes her husband all the time for his tweets. But she accepts that in the end “he will do what he wants to do.”

Of course he will. Mr. Trump sees social media as a source of power, a way of fighting back. And his tweets reach an audience of 43 million, according to twitteraudit. Only half of them are real, but he still has about as many actual viewers as the ABC, CBS, and NBC evening news programs combined. That gives the president a formidable weapon, which he uses to lash out at the mainstream media and present his own version of “reality.” He ridicules his critics, praises his allies, and boasts of his accomplishments. Twitter lets him dominate news cycles, bypass the “failed” media and redirect journalists’ focus, all while stoking his base. And he can do it all very quickly, without impediments by fact-checkers.

But Twitter also may serve a more personal purpose for the president. He told Playboy in 1990 that he typically wakes up at four in the morning with “controlled neuroses,” which he described as a “tremendous energy level” and “an abundance of discontent.” Many of his early morning tweets today display that same restless energy and aggrieved discontent. The metadata of his Twitter account show that during the campaign and in the first months of his presidency, Mr. Trump sent many tweets between five and nine am, using an Android phone. One study found that his early morning tweets were angrier and more inflammatory than ones sent later in the day on an iPhone, presumably by his staff. He still sends nearly 40% of his daily tweets during those hours, especially while Fox and Friends is on the air.

Mr. Trump’s early morning tweets contain attacks like “The media is going crazy. They totally distort so many things on purpose” and conclude with exclamations like “FAKE NEWS!” The most common words in those tweets include “badly,” “crazy,” “weak,” and “dumb.”

If tweets are speech, the president has learned to speak Twitter as a second language.

Mr. Trump’s tweets are often impetuous, denigrating, and simple in substance and style. That makes Twitter the ideal instrument for him, says communications scholar Brian L. Ott. By its nature, Twitter fosters those very qualities, says Ott. It presents no barriers to instant publication and so lends itself to impulsivity. Its impersonality promotes incivility. And its 280-character limit doesn’t allow for complexity.

The linguist John McWhorter calls tweets “fingered speech”; more a form of casual speaking than of writing. Mr. Trump seems to get that instinctively. He tweets as if he’s talking straight to the individual reader, sometimes asking direct questions to create a sense of intimacy. He uses language everyone can understand. (One study showed that he prefers words at a third- or fourth-grade level.) He often tweets in sentence fragments. He capitalizes words for emphasis. And he’s masterful at concluding messages with fragmentary outbursts like “Very dishonest!” or “Sad!” That suits his goals perfectly, because people often retweet messages that are both emotional and morally judgmental.

Some observers argue that this style comes naturally to the president, since his tweets reproduce his public speaking habits. But to some extent the opposite is true. The syntax of Mr. Trump’s ad-libbed campaign speeches was often so self-interrupting and disjointed that transcribers couldn’t punctuate his sentences (so they used lots of em dashes). The linguist Geoffrey Pullum examined a very long passage in one of Mr. Trump’s speeches and found no sentence structure at all. In the president’s tweets, by contrast, the brief format seems to impose syntactic restraint. He‘s a long way from being “the Ernest Hemingway of 140 characters,” which he claims somebody said he is. But his sentence structure is often simple and clear.

In his punctuation, the president sometimes follows the common practice on social media of omitting commas where we would expect them, as in this tweet: “Do you think the three UCLA basketball players will say thank you President Trump?” He often uses comma splices where he should use periods, as in this unwittingly ironic tweet giving advice to the media: “Be nice, you will do much better.” But in many tweets he gets the commas right, showing that he knows the formal rules. And though he uses exclamation points a lot, he generally doesn’t write them in clusters, as is the frequent practice on social media. Nor does he deploy them simply to express sincerity or warmth, as many young people do in digital messages. Instead, he uses exclamation points in the traditional way: to show emphasis or strength, or to mark the imperative mood, as in “Do not worry!”

If tweets are speech, the president has learned to speak Twitter as a second language, though with a Standard English accent. And he uses its conventions to enormous effect. By his own admission, his style is often outrageous. But it’s far more deliberate than it may seem.

Stephen Spector is a professor of English and former department chair at SUNY Stony Brook University. He has published eight books—including The Quotable Guide to Punctuation, Operation Solomon, Evangelicals and Israel, and May I Quote You on That?—dealing mainly with religion, politics, and language. He has received numerous prizes, fellowships, and grants, has been a Visiting Scholar at Hebrew University, Jerusalem, and has held research fellowship appointments at the National Humanities Center and Wesleyan University.