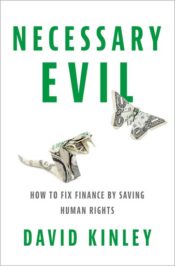 Necessary Evil: How to Fix Finance by Saving Human Rights

Capitalism has been a key force behind human progress for centuries. But as the power of the finance sector has grown, public interests have been sidelined, and human rights concerns have been ignored.

The following shortened excerpt from Necessary Evil takes a look at how the finance sector has repeatedly failed to advance the human condition, and why its level of political influence is dangerous for humanity.

Finance’s monster, like Frankenstein’s, has developed a life of its own and escaped the control of its creators. Where financial institutions might once have been too big to let fail, they are now too big to save. A repeat of the 2007/08 cri­sis today would find the West’s coffers bare. Even China’s massive rainy-day cur­rency reserves would not suffice to reverse a global liquidity crisis on that scale.

Outrage over the finance sector’s special pleading, gargantuan bailouts, tax dodging, and resistance to increased scrutiny and regulation is a sign of an awak­ening consciousness. But the protests are no more than pinpricks to an elephant, and finance’s monster is far from tamed. The major banks are now bigger than they were ten years ago, and they still hold debts so large that failure of even a modest portion would bring the financial system to its knees; levels of cyn­icism within the sector itself, and distrust outside it, remain sickeningly high and are, if anything, rising (barely 50% of us trust banks, the lowest of all the major industry sectors surveyed by the Edelman Trust Barometer); and wealth disparities continue to expand, reaching levels last seen one hundred years ago on the eve of the Great War and the Great Depression. Beneath it all, around 1.5 billion people still struggle daily to find enough to eat and clean water to drink, to enjoy even the most basic levels of health care for themselves, or educa­tion for their children, or power for their homes, and whose access to anything resembling adequate legal or financial services, still less political representation, is nonexistent.

This is not the way things should be. Wealth is not the problem; its allocation is. The world’s total financial assets (valued at a staggering $294 trillion) are four times larger than the combined output of all the world’s economies. So there is, apparently, plenty to go around. Finance argues that the trickle- down effect is its contribution to wealth redistribution, but evidently a trickle is not enough. The median income of US households has in fact significantly dropped over the last 17 years, while that of the rich has steadily risen. For the ultra­rich it has risen stratospherically. For those at the very bottom of the wealth table, the trickle has not registered at all, with the proportion of Americans liv­ing beneath the poverty line rising during that same period.

“Wealth is not the problem; its allocation is.”

We forget (or do not care to remember) that the financial system is a means, not a goal. Its object is not just to bake the biggest wealth pie possible, regardless of ingredients and recipe, texture and taste. It must also be to slice and serve it in ways that increase the sum of human welfare and happiness; in short, in ways that protect, promote, and fulfill the human rights of everyone. The proof of the pie is in its eating: who gets to eat, when, and how much. Finance can enable the good life— a life in which one’s individual security, dignity, and worth are rec­ognized and respected. Its service to the needs of the wider community is what provides finance with validity, as it is these basic “good life” rights that constitute fundamental precepts upon which our societies are built. The continuing failure to recognize the impact that finance has upon them is crippling our efforts to bet­ter understand finance and to make it work for all of us, not just a privileged few.

How can the financial sector be encouraged to spread wealth, not just make it? To reduce poverty, not entrench it? To protect human rights and security, not endanger them?

It turns out that the answers to these questions lie in tackling two elemental obstacles presented by the financial sector itself. First, its narcissism— the perception that such unquantifiable “externalities” as human rights exist beyond the realm of finance and are therefore irrelevant to it. They are somebody else’s prob­lem; neither the concern nor the responsibility of finance. Second, its “financial exceptionalism”— the view that given its immense size, power, and prevalence, the sector justifies its own existence; it is an end in itself, in other words, rather than a means to help achieve other ends.

These are, in fact, perversions of what finance is meant to be. Finance is a mere utility. A vital one to be sure, but one nonetheless intended to serve soci­ety, not to subvert it. The institutions of finance are licensed to promote broad community interests, not just to satisfy the narrow interests of their immediate stakeholders. Even financial insiders concede the point. William Dudley, former CEO of the Federal Reserve Bank of New York and former managing director of Goldman Sachs, opened a 2014 workshop on reforming banking culture with the words: “Financial firms exist, in part, to benefit the public, not simply their shareholders, employees and corporate clients.” The protection and promotion of human rights is one of the most important ends to which finance must be put. This is something that finance itself can neither ignore nor avoid, as it is by way of delivering such service that the financial system obtains its very legitimacy, its social license to operate.

“We forget (or do not care to remember) that the financial system is a means, not a goal.”

It is also something that the sector is quite capable of achieving. For alongside finance’s negative entries in the human rights ledger, there are also some nota­bly positive ones. Finance has helped liberate individuals and peoples alike by providing them with greater independence, freedom, security, and self- respect. It has further enabled states to improve the basic living standards of many and to provide particular help to those most in need. Relatively small but significant increases in individual income and wealth have also lifted hundreds of millions of people out of abject poverty. Finance’s engagement with human rights, there­fore, is not just about the damage it causes. Its contribution can and should be much more constructive.

David Kinley is Chair in Human Rights Law at the University of Sydney and an expert member of Doughty Street Chambers in London. He is a former Fulbright Senior Scholar and has previously taught at the Sorbonne and Cambridge University. He is the co-author of The International Covenant on Economic, Social, Cultural Rights (winner of the American Society of International Law's Best Book Award), Civilizing Globalization and Necessary Evil: How to Fix Finance by Saving Human Rights.