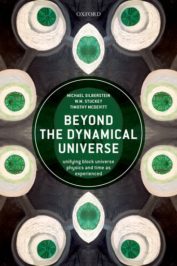 Beyond the Dynamical Universe: Unifying Block Universe Physics and Time as Experienced

“A recurring theme in natural philosophy is the tension between the God’s-eye view of reality comprehended as a whole and the ant’s-eye view of human consciousness, which senses a succession of events in time. Since the days of Isaac Newton, the ant’s-eye view has dominated fundamental physics. We divide our description of the world into dynamical laws that, paradoxically, exist outside of time according to some, and initial conditions on which those laws act. The dynamical laws do not determine which initial conditions describe reality. That division has been enormously useful and successful pragmatically, but it leaves us far short of a full scientific account of the world as we know it. The account it gives—things are what they are because they were what they were—raises the question: Why were things that way and not any other? The God’s-eye view seems, in the light of relativity theory, to be far more natural … ascending from the ant’s-eye view to the God’s-eye view of physical reality is the most profound challenge for fundamental physics in the next 100 years.”

To explain “event X,” physicists generally start with events in the past of event X (initial conditions) that can be time-evolved via the laws of physics to give rise to event X. As Sean Carroll has pointed out, this use of initial conditions and dynamical laws to provide a time-evolved story is used throughout physics to include Maxwell’s equations of electromagnetism, quantum mechanics, special and general relativity, and quantum field theory. Appropriately, Lee Smolin has called this ant’s-eye explanation the “Newtonian Schema.”

The Newtonian Schema conforms well with our time-evolved perceptions (ant’s-eye view) since we remember the past and we want to predict the future. Mathematically, we can use our laws of physics in differential form to model this Newtonian Schema thinking. For example, consider a rock launched from a trebuchet (initial conditions) that subsequently smashes a castle parapet (event X). The rock’s trajectory would be a parabola according to Newton’s second law of motion, F = ma, i.e., force equals mass times acceleration. Gravity acting in the vertical direction supplies F for Newton’s second law in this case which results in a second-order differential equation in vertical position as a function of time (since acceleration is the second derivative of position with respect to time).

This second-order differential equation requires two pieces of information to render position as a function of time for the rock. If one chooses initial velocity and initial position, these two pieces of information would be called initial conditions. Choosing conditions at the beginning of the motion and asking what happens per the laws of physics reflects the fact that we remember the past, not the future, so in general, we want predictions, not retrodictions.

Unfortunately, there are situations in physics where the initial conditions are inexplicable, e.g., conditions at the Big Bang. In quantum mechanics, we have the delayed choice experiment where what we would expect to be the explanans (experimentalist’s choice of experimental configuration) occurs after what we would expect to be the explanandum (experimental outcome). In these cases, the ant’s-eye view of reality creates mystery; however, the God’s-eye view easily resolves the mysteries created by the ant’s-eye view.

In the mathematical formalism associated with the God’s-eye view, one casts the laws of physics in integral form rather than differential form using the “action.” The action is the integral of the Lagrangian (kinetic energy minus potential energy) from the beginning of the trajectory (where our rock is launched) to the end of the trajectory (where the parapet is smashed). The trajectory that makes the action minimal or maximal with respect to nearby trajectories is the trajectory that actually exists in spacetime. This is called the “principle of least action” and demanding that it be satisfied instant by instant gives rise to the differential form of our laws of physics (F = ma for our rock). Appropriately, this God’s-eye approach is what Huw Price and Ken Wharton call the “Lagrangian Schema.”

Per the God’s-eye view of reality:

“There is no dynamics within space-time itself: nothing ever moves therein; nothing happens; nothing changes. In particular, one does not think of particles as moving through space-time, or as following along their world-lines. Rather, particles are just in space-time, once and for all, and the world-line represents, all at once, the complete life history of the particle.” — Robert Geroch.

Since spacetime is “once and for all,” the Lagrangian Schema explanation of the events in spacetime needn’t be restricted to time-evolved storytelling compatible with our ant’s-eye experience. God’s-eye explanation resides in spatiotemporal patterns per “global constraints,” such as the principle of least action, whereby the goal is “spatiotemporal self-consistency.” Accordingly, the present needn’t be explained by the past alone; rather the past, present, and future co-explain each other in the God’s-eye view. Initial conditions that are inexplicable per the ant’s-eye view are now explicable and the requirement of strict causal ordering is dismissed as an unnecessary limitation created by our ant’s-eye bias.

As Ken Wharton points out,

“When examined critically, the Newtonian Schema Universe assumption is exactly the sort of anthropocentric argument that physicists usually shy away from. It’s basically the assumption that […] the computations we perform are the same computations performed by the universe, the idea that the universe is as ‘in the dark’ about the future as we are ourselves.”

Until we physicists can discard our self-imposed anthropocentric constraints resulting from our ant’s-eye bias, we will not rise to Wilczek’s challenge and ascend to the God’s-eye view of reality.

W. M. Stuckey is a professor of physics at Elizabethtown College where he teaches an array of physics courses to include general relativity and quantum mechanics. He has published in the areas of relativistic cosmology, dark matter, dark energy, quantum gravity, and foundations of physics, and he is a co-author of Beyond the Dynamical Universe: Unifying Block Universe Physics and Time as Experienced.

Innovation: in and out of the Budongo