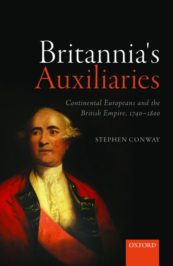 Is the wider world really the alternative to Europe that some of today’s commentators claim? Britain’s eighteenth-century experience suggests not. Then, the supposed alternatives, in the eyes of some contemporaries, were Europe and empire. But look more closely at Britain’s empire, and we can see that its development, defence, and expansion owed much to other Europeans. Britain’s interest in empire and in Europe, it transpires, were complementary, not alternatives.

German and Dutch cartographers mapped out the British dominions in North America after the Seven Years War of 1756-63. Swedish and German scientists accompanied Captain Cook on his Pacific voyages of discovery. Italian silk spinners helped the British to improve raw silk production in India. Scandinavian, German, Dutch, Spanish, Portuguese, and even French mariners sailed on British naval and merchant vessels in the Atlantic and Indian Oceans. Foreign Europeans of various nationalities established themselves as merchants in different British imperial sites. Swedish, German, and French Protestant clergymen tended to congregations in North America and India. Most importantly, continental Europeans—mainly German, Swiss, and French Protestants—provided many thousands of settlers for the North American colonies and probably as many soldiers in almost every area of British imperial activity.

Continental Europeans also sustained the British Empire from without. Merchants in continental ports sold goods to the British for their imperial sites, making life easier for colonial consumers in North America and the West Indies, and even Britons in India. Continental merchants similarly aided British slave traders in West Africa, who used European glass, knives, and firearms as exchange commodities. At the same time, continental Europeans bought large quantities of British imperial products. Continental Europeans invested in the British Empire, too. They bought into the British national debt, which underpinned a great deal of imperial activity, but also secured stock in the great chartered companies and even provided credit for plantations in the newly acquired West Indian islands after the Seven Years War. Other Europeans also aided British imperial communication. Ships of various European states carried the public and private letters of Britons to and from imperial sites, and even conveyed British imperial officials. Britons on their own ships also benefited from the rest and refreshment provided at the Spanish Canaries, Portuguese Madeira, and the Dutch colony at the Cape, breaking the tedium of the long passage to and from India. Britons in India itself, meanwhile, found Danish, Swedish, Dutch, and even French merchants and their East India Companies invaluable assistants in transmitting home private profits. Britons in India and West Africa also drew succour from social interactions with the neighbouring fortified trading bases of their European commercial rivals.

Continental Europeans who made their living in or through the British Empire would not have seen themselves as assisting the British; they were pursuing their own ends.

Some foreign Europeans had little choice about their participation, but many became involved willingly, even enthusiastically. They often engaged with the British Empire for exactly the same reason as many Britons did—to improve their own and their family’s situation. Continental Europeans who made their living in or through the British Empire would not have seen themselves as assisting the British; they were pursuing their own ends. Nevertheless, they played the part of Britannia’s auxiliaries. Many of those who entered the empire became at least partly anglicized as a result; they retained their own language and customs in their family and religious lives, but adapted to British or even English norms in the public sphere, learning English, becoming familiar with English legal processes, and even anglicizing their names.

Continental European involvement was possible only as a result of the willingness of Britons to allow it. Private trans-jurisdictional networks, based in some cases on religious or professional connections, but more usually on a common desire for profit, facilitated European engagement with the British Empire. So did British governments. While keen to exclude foreign manufactures from British imperial markets, politicians and officials encouraged and welcomed other forms of continental European involvement. They facilitated foreign investment in the empire and still more the importing of continental European human resources, particularly in the form of settlers and soldiers. Ministers and administrators in London, and their partners in various imperial sites, sought continental participation partly because Britain and its North American colonies needed human capital. France, Britain’s greatest imperial and European rival, had a much larger population than Britain and Ireland combined, even in the last decades of the eighteenth century, when the British Isles experienced rapid and sustained demographic growth. The North American colonies, for their part, required more settlers to realize their economic potential and to improve their security — both from external attacks by the French and native peoples and from the internal danger of slave revolt, particularly in the south.

Quality considerations also came into play. British governments wanted to promote continental European settlement in North America because continental Europeans possessed skills that would be valuable to the economy. Continental European soldiers brought military skills that could not be provided, or could not be provided adequately, from British and imperial resources. If it were simply a question of numbers, then colonial Americans and native troops in India could provide much of what was required. But to British decision-makers, well-trained and led professional European soldiers, employed extensively by the British state in its European campaigns, were imperative for imperial theatres.

Continental Europeans entered or engaged with the British Empire largely on British terms to meet British needs. For private British interests, other Europeans made the empire more profitable. For British governments, they helped to realise national objectives. British decision-makers were moved not so much by a sense of European solidarity as by a hard-headed appreciation of continental Europeans’ value. Foreign involvement provoked criticism from members of the wider British public. To ministers and officials in London, however, and to their partners in the empire, national sentiment was less important than national interest. If transnational means helped to strengthen the British position in competition with the other European empires, then those means should be used. Politicians and functionaries of the British state, in other words, sought to turn the currents of early globalization to national advantage.

Featured image credit: Map of the World, 1899 by The British Library. Public domain via Wikimedia Commons.

Stephen Conway is a professor of history at University College London and a fellow of the Royal Historical Society. He is the author of Britannia's Auxiliaries: Continental Europeans and the British Empire, 1740-1800.