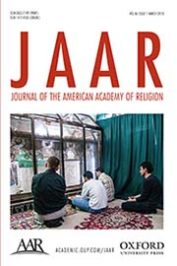 Journal of the American Academy of Religion

The Journal of the American Academy of Religion is generally considered to be the top academic journal in the field of religious studies. This international quarterly journal publishes top scholarly articles that cover the full range of world religious traditions together with provocative studies of the methodologies by which these traditions are explored. Each issue also contains a large and valuable book review section.

Why haven’t the insights of critical theory been more widely incorporated into the work of religious studies scholars in particular, and humanists more generally? Conversely, why have critical theorists missed the cross-cultural patterns of signification that have shaped post-tribal hierarchies for millennia, when they are so adept at finding hidden epistemological linkages within western political hegemonies? The answers to both of these questions are important because humanists are in desperate need of a more expansive theoretical hermeneutic with which to better “read” the contemporary world.

It turns out, we don’t have to wander too far into the intellectual wilderness to find a viable track. It lies hidden in plain sight, in the well-known but insufficiently understood discourse on civil religion. Indeed, there are clues at the very epicenter of the Enlightenment. Book IV, Chapter 8 of Jean-Jacques Rousseau’s The Social Contract—which first articulates the idea of a civil religion (religion civile)—was not proposing some radically new reconfiguration of civil society, as is often assumed. He was merely rhetorizing a long perduring historical process: namely, the ideological sublation of alternative otherworldly orders. Rousseau was plotting the strategy by which discrete communities of strangers come to dwell within the same “imagined community,” which is to say uneasily, temporarily, and always with the promise of violence.

It is, in fact, a very old antagony, and history is replete with examples of it. There is the fifth-century Athenian rhetorician Isocrates’ oration Panegyricus, which calls for a barely coherent “Greece” to be unified by Athenian philosophy. And there’s Philo Judaeus, a first-century Hellenistic Jew, whose work, The Embassy on Gaius, protests the installation of the Roman emperor Caligula’s effigy in the Temple by offering up the Jewish “nation” (ethnos) for collective self-sacrifice. Though their circumstances were very different (Isocrates was a member of a culturally ascendant ethnic elite, and Philo was a member of a culturally hybridized ethnic minority), they each suggest the same underlying contingency. Specifically, nations and nationalism aren’t newly emergent social phenomena; religions and religiosity aren’t vestigial social formations. The conditions for the emergence of something like a “nation,” or a “religion,” have been with us since societies began transitioning from tribal networks (i.e. kinship relations) to institutional hierarches (i.e. supra-kinship relations).

The fact that we’ve misunderstood the nature and historical status of these two trans-local social typologies (i.e. nations and religions) shouldn’t surprise us. Indeed, as Foucault showed us—but was himself unable to escape—the discipline/ing of thinking shapes not only how we see things but what we see. Our disciplines curate our answers, and our questions.

That many of us in the intelligentsia have come to believe that modernism or the Enlightenment was a definitive break with a past that was materially precarious but internally consistent, enchanted but superstitious—is precisely what we’ve been institutionalized to believe. That the world we now inhabit is fundamentally different from the world that preceded us (for good or ill—pick your millenarianism) is the favorite story trans-local supra-kin communities tell about themselves. Why would our scholarly community be any different?

It is the humanist’s responsibility to imagine—or contribute to the imagining of—more comprehensive epistemological frameworks. Frameworks that become more capacious over time, not less.

To overcome the “structural amnesia” of our disciplines, we must humanize them—ask questions that are both more ambitious, and humbler. One wonders, for example, at what the other Alexandrian Jews thought when they heard Philo’s gruesome offering, his enthusiastically detailed description of the ways in which the nation would anoint the defiled temple with its own blood. I don’t mean what the marginalized “Jews” in the provinces thought of Philo’s urban chest thumping—though it’s an important question explored by a number of scholars. I mean what did the other peripheral elites think, the ones with Alexandrian lovers, illegitimate Egyptian children, small businesses, who loved beer and the sun, the ones for whom we have no records, the ones we tend to fossilize socially, economically, ethnically, into one corporate body?

These details are, of course, lost to history, but to consider them is not irrelevant, or sophomoric—or hopelessly “Western.” It is the humanist’s responsibility to imagine—or contribute to the imagining of—more comprehensive epistemological frameworks. Frameworks that become more capacious over time, not less. Philo’s sacrificial exhortation, for example, strikes the less historically-hidebound reader as a sanguinary preface to US President John F. Kennedy’s rhetorically rousing enjoinment, “ask not what your country can do for you.” While Isocrates’ sermon on the transcendental value of philosophy, education (paideia), and chauvinistic cosmopolitanism, echoes in Charles Hodge, the nineteenth-century Presbyterian theologian and leading voice of Princeton Theology, who so closely tied his theology to his politics. But these comparisons are difficult to coordinate using our current scholarly instruments. They sound rushed, de-contextualized, naïve. Even our best critical theories have become ensnared by the powers they would critique.

There are many lessons that we might learn from reading critical theory, but one of them is that transcendental grounds aren’t found—they’re won. It is, of course, true that the “world religions” discourse, and the analytic frameworks that essentialize religion, were socially constructed by soldiers’ bayonets and colonial administrators’ pens, but there is nothing uniquely “Western” about violently forcing one’s cosmology onto foreigners, then gradually mythologizing the sympathetic significations that emerge. Sufism is a good example of this. Still, the work of the critical theorists is vital because it is essential to the creative process. We have to be reminded over and over again that the principles we take for granted overcame other definitive but antagonistic material histories.

Yet, in many cases, critical theorists have contested with these discourses for so long their critiques have become myopic. They’ve missed the genre’s counter-intuitive Eurocentrism, and too easily glossed the intellectual limitations of its insular argot. Difference should be recognized, not fetishized. Not because there’s something wrong with a fetish, but because its power comes from privacy, titillation, the small-circle sociality of cants. Ours is a public charge. What we discover in secret, alone in the library, is a debt owed to the world. Those of us who have had the privilege to acquire the very best tools a professional twenty-first century reader can buy, are responsible to those of us without those tools. It is incumbent upon us to build a new epistemology out of the history we have inherited. New formulations of the world are established when history’s constants are creatively rearranged around present-day variables. What was once our ancestors’ ruddy mess is now our own.

C. Travis Webb is Editor of The American Age and is currently at work on the manuscript The Imagined World: From State's Rites to Religious Rights. He is the author of the article “‘Otherworldly’ States: Reimagining the Study of (Civil) ‘Religion’,” published in the Journal of the American Academy of Religion.

Desires for power: sex scandals and their proliferation