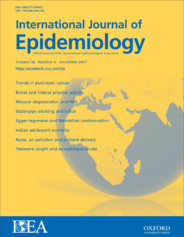 The International Journal of Epidemiology is an essential requirement for anyone who needs to keep up to date with epidemiological advances and new developments throughout the world.

The body mass index (BMI) is a crude but useful measure of how heavy someone is for their weight. It consists of your weight in kilograms, divided by the square of your height in metres. Guidelines suggest that a BMI between 18.5 and 25 is healthy for most people. You are classed as overweight if it is 25-30 and obese if it is more than 30. You might think that establishing the healthiest BMI is simple. You take a large, representative sample of people and put them into groups according to their BMI. In each group you then measure some aspect of average health, such as the average lifespan. If you take this approach, which I’ll call the observed association, you find that the apparent ideal BMI is a little over 25. People classed as overweight actually live a little longer, on average, than those with a BMI in the recommended range. This has prompted numerous press articles advising people not to worry about being overweight, and some have accused scientists of deliberately misleading the public. But it’s a little bit more complicated than that.

When we advise people on what a healthy BMI is, what matters is the causal effect of BMI on health. The causal effect tells us if changes in BMI will bring about changes in health. The causal effect of BMI is not necessarily the same thing as the observed association between BMI and health. In other words, correlation is not (necessarily) causation. The reason for this is a process which statisticians call “confounding”. For example, the association between BMI and mortality may be confounded by smoking. Smoking causes a reduction in BMI (through appetite suppression). It also causes the premature death of many smokers. The result is that a lot of thinner people die young; not because they are thinner, but because they are smokers. Another important source of confounding is the early stages of disease; this is sometimes called reverse causation. Many diseases can cause weight loss, even in their early, undiagnosed stages. These same diseases, in time, can contribute to a person’s death. These people are not dying because they are thin; they are thin because they have a disease that will eventually kill them. If we interpret a confounded observed association between BMI and mortality as if it were a causal effect, we will get a false impression of the healthiest BMI. Disentangling the causal effect from the observed association is not a straightforward task.

There is no single statistical method that can completely eliminate confounding, leaving us with an unbiased, precise estimate of the causal effect of BMI on survival. The most common approach is to measure potential confounding factors and take them into account in a process known as statistical adjustment. However, this method is only as good as the measurement of the confounder. Many confounders will be poorly measured, or not even thought of. We can restrict the people we analyse so that they are all similar in terms of the suspected confounders—only analysing apparently healthy non-smokers, for example. But then our study sample no longer represents the population properly, and who knows what confounders may remain? To reduce the problem of reverse causation, we can exclude deaths which happen shortly after BMI measurement. But a person could lose weight through illness years before their eventual death; how far back do you go? Another statistical method is to use something related to a person’s BMI, but not affected by the confounding factors, in place of BMI in the analysis. Examples include the BMI of their offspring (which is still somewhat related to the confounding factors) or a gene affecting BMI (which provides only very imprecise evidence).

David Carslake is a Senior Research Associate at the MRC Integrative Epidemiology Unit and the Population Health Sciences Institute at the University of Bristol. His research focuses on the additional information about health and disease that can be gained by studying linked family members. David is the lead author of “Confounding by ill health in the observed association between BMI and mortality: evidence from the HUNT Study using offspring BMI as an instrument”, published in the International Journal of Epidemiology.