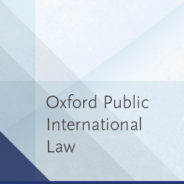 Two thousand and seventeen was, once again, a dramatic year in terms of world affairs. Fears about a rising tide of nationalism were stemmed by the failure of far-right parties to win majorities in the Dutch, French, and German elections but the impact of arguably 2016’s biggest upheaval – the election of President Trump – was felt far and wide. A key theme, from France and Ireland to Zimbabwe, was old orders being replaced by the new. The effect these political changes will have on international law will reveal itself over the next few years. In the meantime, this post looks back and examines ten major events and developments that shaped the international legal order in 2017.

In early April, the United States launched an air strike against a military base in Syria used by President Assad to carry out chemical weapon attacks against his own population. The strike was justified as retaliation for the use of chemical weapons and to deter their future use. International law commentators were fairly unanimous in their verdict on the legality of the strike: the use of force against another state is prohibited by the UN Charter with only a limited exception for self-defence (and some would argue, controversially, humanitarian intervention), which this airstrike clearly was not. The international response to the air strikes was however muted and largely characterised a by quiet support. Could this show an increased willingness on the part of states to accept unlawful military action as ‘legitimate’ and boost the case of those arguing in favour of humanitarian intervention?

At the start of June, a group of Arab nations including Saudi Arabia, the United Arab Emirates, and Bahrain cut all ties with Qatar, halting all land, air, and sea traffic, ejecting Qatari diplomats as well as some citizens, and instituting targeted sanctions against Qatari organizations and nationals. The group cited Qatar’s support for terrorist organizations as the justification for these actions, though no hard evidence was produced. Despite efforts at the UN and elsewhere to bring the blockade to an end, it is still ongoing. In the absence of clear evidence that Qatar is violating any of its international obligations, the blockade could well fall foul of one of the international law’s foundational principles: non-intervention. In this view, Saudi Arabia, the UAE, and Bahrain are violating Qatari sovereignty by trying to coercively interfere in Qatar’s internal affairs.

The Chagos Islands have been the subject of controversy and legal proceedings for years, with disputes centring on the UK’s continuing sovereignty over the islands against Mauritius’ wishes, the forced relocation of its original inhabitants, the US military base on one of the islands, and the UK’s proclamation of a protected marine zone around the territory. Now, the International Court of Justice (ICJ) will get a chance to clarify some of the legal issues at stake. In June, the UN General Assembly asked the Court for an advisory opinion on the legality of the decolonization process and the consequences of the UK’s continued administration of the islands. The Court’s opinion will not be binding, but an outcome favourable to Mauritius will make the UK’s position increasingly awkward.

On 7 July 2017, the final text of the Treaty on the Prohibition of Nuclear Weapons was adopted. The treaty unambiguously prohibits the development, possession, transfer, stationing, use, and threat of use of nuclear weapons. It complements the 1968 Treaty on the Non-Proliferation of Nuclear Weapons. Unsurprisingly, none of the nine states who actually possess nuclear weapons have signed up to the new treaty, so its practical impact is likely to be very limited, at least in the short term. However, in a year in which the war of words between North Korea and the US reached new heights, it is surely a good development to see the 122 states who voted in favour of the treaty take a strong stand against nuclear weapons.

Bărbulesecu v. Romania: Right to privacy in the work place

In a much-publicized case on work place privacy, the European Court of Human Rights’ Grand Chamber overturned an earlier Court decision on the legality of an employer monitoring an employee’s communications through work channels. The Grand Chamber found that employees have a reasonable expectation of privacy, even if they have been told by their employer that using their work email or chat for personal conversations is strictly prohibited. The ruling will be reassuring to anyone within the Court’s jurisdiction worried about the extensive ways their employers can check up on them, but leaves a number of wider questions about internet surveillance unanswered.

Catalonia’s decades-long push for independence came to a head in October with the referendum and subsequent declaration of independence. At first glance, this might seem a purely domestic issue, but international law sets out the requirements for statehood and conditions under which territories may secede. In addition, international human rights law applies to the force used by the Spanish police in their attempt to stop voters from participating in the referendum, and we may yet see a case brought before the European Court of Human Rights. Those looking for a neat answer on the legality of Catalonia’s attempted independence will be disappointed however; opinions are divided on whether international law supports the creation of a new state in the absence of the consent of the remaining state or (more controversially) evidence of systematic repression and human rights abuses.

The ICJ has an unwritten rule that each of the five permanent Security Council members has a judge on the bench. It was highly surprising therefore that the British Judge Sir Christopher Greenwood failed to be re-elected. ICJ elections are highly politicized and commentators were quick to attribute Greenwood’s defeat to Britain’s waning influence in the world. It is likely that developing countries’ displeasure at the P5 system was also a key factor. The forthcoming absence of a British judge could still turn out to be the exception that proves the rule but, judging from the strong General Assembly backing for the re-elected Indian Judge Bhandari and the newly elected Judge Salam from Lebanon, it is not a safe bet.

In a year in which there was not much good news for the environment, a decision by the UK Court of Appeal stands out: in a landmark judgment, it found that a UK company, Vendata, can be held responsible under UK law for the actions of its Zambian subsidiary Konkola Copper Mines (KCM). KCM stands accused of causing significant harm to local waterways through water discharged from one of its copper mines. The Court of Appeal found that given the virtual impossibility of a fair trial in Zambia and the level of oversight Vendata had over its subsidiary, the case can proceed in the UK. Regardless of whether the Zambian villagers’ claim will succeed on the merits, this judgment adds to a body of cases, in the UK and beyond, which hold that companies can be held accountable for harm caused by their subsidiaries in other countries.

The International Criminal Tribunal for the Former Yugoslavia (ICTY) formally closed its doors at the end of last year and is now superseded by the UN Mechanism for International Criminal Tribunals, which will deal with the last appeals and the Tribunal’s legacy. With nearly 100 persons convicted of international crimes, the ICTY will go down in history as a watershed in the bid to remove impunity from criminal conviction for military and political leaders. In December, the Tribunal rendered a judgment in one of its most high-profile cases: the prosecution of General Radko Mladić for genocide, crimes against humanity, and war crimes. He was sentenced to life in prison. At a time when there is once again a sense that some of the world’s worst tyrants can act with impunity, the significance of this conviction should not be underestimated, even if it is unlikely to change local perceptions of the conflict and Mladić’s guilt.

US recognition of Jerusalem as Israel’s Capital

In December, President Trump broke with international consensus by declaring Jerusalem to be the capital of Israel and undertook to move the US embassy there from Tel Aviv. Jerusalem’s status is controversial in political terms but international law is quite clear: in its 2004 Israeli Wall advisory opinion, the ICJ referred to East Jerusalem as occupied Palestinian territory and, in 1980, the Security Council condemned as a violation of international law an Israeli law proclaiming the whole of Jerusalem to be the nation’s capital. The Security Council also called on Member States to move their embassies from the city. Trump’s move could, therefore, breach the obligation not to recognize an illegal situation in international law.

Are there any important developments we have missed? Get in touch with us on Twitter or Facebook to continue the debate.