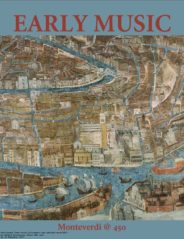 Early Music is a stimulating and richly illustrated journal, and is unrivalled in its field. Founded in 1973, it remains the leading journal for anyone interested in early music and how it is being interpreted today.

The year of 2017 has proved an exciting year for anniversaries. From the quincentennial of Martin Luther’s 95 theses of 1517, or the 150th anniversary of Canadian Confederation in 1867, to the centenary of the 1917 Russian revolutions, the historic events commemorated this year call us into celebration as much as they urge us into reflection and contemplation. 2017 also marks the 450th anniversary of the birth of one of the greatest composers of the Italian seventeenth century: Claudio Monteverdi (1567–1643).

For both performers and scholars, the music of il divino Claudio has always held an almost other-worldly fascination, a deeply moving quality which seems to speak directly to the temperamental and often contradictory nature of the human experience. In the words of Bellerofonte Castaldi (1580–1649), a composer and poet from Modena, Italy contemporary to Monteverdi, the music of “Claudio gentil” had the power “to enchant not only the earth, and the sky, but even hell”. The awe-inspiring variety evoked in Monteverdi’s operas, madrigals, and sacred music have continued to inspire new and creative approaches in the work of generations of contemporary musicians.

As just one example of such collaborations, the Monteverdi Choir and English Baroque Soloists, under the direction of Sir John Eliot Gardiner, present Monteverdi 450, a seven-month tour between April and October 2017 featuring semi-staged performances of Monteverdi’s three surviving operas. The adaptability and seemingly endless appeal of Monteverdi’s music testifies to its resilience even in the face of rapidly changing times and tastes. John Eliot Gardiner has described the apparent timelessness of Monteverdi’s music, even in a modern context: for Monteverdi, “what’s really important is how to express and to convey the intensity and the whole range of human emotion,”says Gardiner in a video taken in 2016 during the Accademia Monteverdiana workshops at the Fondazione Giorgio Cini in Venice.

In addition to the various special concerts, international conferences, and festivals that will commemorate Monteverdi’s 450th birthday, an entire issue of a music journal is devoted to a re-evaluation of the composer’s life, music, and centuries-long influence on the history of music. In an essay by John Eliot Gardiner himself, titled “Monteverdi at the crossroads,” describes the way perceptions Monteverdi have changed during his own career as a specialist in early music. Gardiner points out that until relatively recently, it was largely non-Italian ensembles who spent their time interpreting and recording Monteverdi’s music. The past decades however have seen a great renaissance of Monteverdian interest in Italy and the emergence of several Italian groups who devote their time to the study and performance of Monteverdi’s music.

In a flurry of new recordings by Italian ensembles in recent years there are many worth noting, including Concerto Italiano’s brilliant Vespri solenni per la festa di San Marco (Naive, 2014), directed by Rinaldo Alessandrini. Just this year, La compagnia del madrigale released a stunning new recording of Monteverdi’s Vespers of 1610 (Glossa, 2017), following up from their album “Il pianto della Madonna”(Glossa, 2016), which features the rarely-recorded sacred contrafacta of Monteverdi’s madrigals published by Aquilino Coppini in 1607-1609. With some overlap with singers of the ensemble La Venexiana directed by Claudio Cavina—known for their ground-breaking recordings of Monteverdi’s complete madrigals—La compagnia del madrigale and “Zefiro torna, e ’l bel tempo rimena” from Monteverdi’s Book VI (1614). Several other ensembles who specialize in early music (Italian and non) have taken the composer’s 450th birthday as an opportunity to experiment with the composer’s lesser known works. One especially impressive example is the English group I Fagiolini, directed by Robert Hollingworth, who present their elegant new recording of liturgical music by Monteverdi and some of his contemporaries titled “The Other Vespers” (Decca, 2017).

Roseen Giles is a fellow of the Centre for Reformation and Renaissance Studies at the University of Toronto, and will begin as Assistant Professor in the Department of Music at Duke University in 2018. Her research is focused on music and culture of early seventeenth-century Italy.