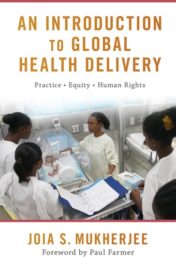 An Introduction to Global Health Delivery

Images of a Loa Loa worm crawling across a woman’s eye, a man’s leg swollen, unrecognizable from filariasis, a child comatose from malaria: these are the images often used to start a lecture on global health. The people suffering from these exotic maladies are undoubtedly of people of color who hail from communities and countries impoverished by a succession of geopolitical forces in direct opposition to human rights. The ravages of slavery, colonialism, and the strictly imposed economic ideology called neoliberalism, resulted in and perpetuate the concept of a first, second, and third world. A concept under which we normalize and accept massive and profound inequities and ignore the history and politics behind them.

In medical teaching, rarely is the link made between seemingly exotic conditions and the social, political, and historical forces that are the vectors of health inequity. One pillar of the framework of three worlds is that the provision of health care to poor people is not a global priority. Rather than working to deliver medical care and righting social and economic inequities, the common credo: “Prevention is better than cure” is taught and cited. The phrase, attributed to 16th century Dutch religious scholar, Erasmus, preceded nearly all medical treatments (his own parents died of plague) and likely had more to do with spiritual than physical prevention. Yet, this co-opted phrase underpins much of the decision-making about health where resources are most limited and the disease burden is highest. The primacy of prevention over treatment is guided by the working hypothesis that bad behaviors and ignorance cause illnesses among the poor, and treatment is simply too expensive. With this philosophy, health experts implement a raft of programs to educate the poor about causes of their suffering and encourage them to change their behaviors. Such programs, promoted as feasible and sustainable, are indeed cheaper than the delivery of medical care or the correction of social inequalities. However, for those who are sick, prevention is decidedly too late and, of course, not better than cure.

“For those who are sick, prevention is decidedly too late”

Revolutionary advocates for social justice, from Martin Luther King Jr., to Nelson Mandela, from Steven Biko to Che Guevara, saw health as a thermometer for inequality and oppression. The right to health is contained within the 1948 Universal Declaration of Human Rights. The famous 1978 conference on Primary Health Care in Alma Ata, USSR called for “health for all by the year 2000”. Unfortunately, the rise of neoliberal economics—the dominant paradigm for development for decades—stymied the progression toward health as a human right. This economic philosophy posits that restrictions on government spending in favor of the private provision of health care will result in a healthier economy. The evidence that privatization of health services promotes economic health is dubious at best. Moreover, the privatization of health care does not result in healthier people. In fact, such policies worsen health inequity between the rich and the poor.  Yet, the rhetoric of restricting government spending on health pervades the world today.

This year, the fight from right-wing politicians in the United States to repeal government subsidies under the Affordable Care Act echoes the theory that the private market, not the public provision of health care, is the way to freedom and economic prosperity. The belief in the private market is held so strongly by neoliberals that they are willing to let tens of millions of their fellow citizens lose health care.

Thankfully, social movements beginning at the close of the 20th century, most notably the fight for AIDS treatment access, demanded accessible and equitable treatment for all. The movement for AIDS treatment access was successful in garnering billions of dollars to provide health care (in this case access to AIDS drugs) as a human right. The movement was expanded to focus on the right to health. It eschews the nihilist narratives of prevention-only programs and trickle-down economics for the poor. The movement promotes a vision of equitable access to health rather than narrowly constructed narrative of sustainability and personal responsibility. This aspiration is attracting scores of young people to the field of global health and is breathing new life in to many who have fought at the front lines for social justice for decades.

Global health providers are working to diminish inequity, scholars are investigating novel solutions to deliver care, and activists are taking the fight to the halls of government. It is clear that global health needs more than technical or academic fixes. It requires the expansion of a broad-based social movement: a movement that must incorporate the voice and talents of those affected, address the social forces that affect health, and build systems of care to achieve health equity. This mission is, by necessity, collaborative, interdisciplinary, and international. It must not reproduce the white, patriarchal, and hierarchical structures that have created and perpetuate profound inequality within and between countries. Meeting students and colleagues from around the world interested in this vision of global health is an antidote to a world that seems, at times, tragically yoked to cruelty. To repair gross and systemic health injustice we must support this movement in which care, compassion, collaboration, and justice are essential. Global health as a discipline ought to seek nothing less than the provision of health care to all as a basic human right.

Joia S. Mukherjee is Associate Professor of Medicine in the Division of Global Health Equity at Brigham and Women's  Hospital, and Associate Professor of Global Health and Social Medicine at Harvard Medical School. She directs the Harvard's Master of Medical Science and Global Health Delivery program and has been Chief Medical Officer at Partners In Health since 2000. Professor Mukherjee has also served as an expert consultant for the World Health Organization and Ministries of Health on HIV, tuberculosis, health systems strengthening, and health workforce development.

Professor Mukherjee’s book, An Introduction to Global Health Delivery, is available in both print and online.