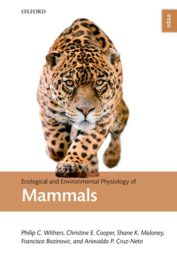 Ecological and Environmental Physiology of Mammals

Whether they’re gray or red, climbing a tree or scurrying on the ground, squirrels are one of the most ubiquitous mammals in the world. They are found in almost every habitat imaginable from tropical rainforests to deserts, avoiding only the most extreme conditions found in the high polar and arid desert regions. Different types of squirrels are indigenous to almost every continent including the Americas, Europe, Asia, and Africa. Humans introduced this bushy-tailed creature to Australia.

We’ve all seen squirrels scampering around placing seeds and nuts in hollowed out tree trunks and under roots to keep them hidden from the competition. As herbivores, these are their main sources of nutrition but many will eat small insects and even small vertebrates if there is a need for it. Their rodent-like teeth allow for a varied diet.

This month, we’ll be honouring the adaptability to all types of weather and climate of this furry little mammal – we have ten facts to help you appreciate the squirrel.

1. Living in trees = bigger brains
That is, if you’re a squirrel. Arboreal squirrels have been found to have significantly larger brains for their body size than terrestrial squirrels. This was found to be a better predictor than diet or habitat but seemingly had no relationship to reproductive effort.

2. All fingers and thumbs
Squirrels have four digits on the fore limbs but five on the hind limbs. All their digits have rather sharp claws to make grasping branches and bark much easier when climbing trees. Tree squirrels are able to descend a tree head-first by rotating their ankles 180 degrees so the hind paws are pointing backwards, allowing them to better grip the tree bark.

3. Ecological nationalism
Before the introduction of the American gray squirrel to the United Kingdom, red squirrels were also seen as pests. It seems there were political as well as ecological overtones to the general dislike of the gray squirrel. In a letter to The Times (21 October 1971), the owner of a woodland garden that gray squirrels allegedly terrorized admitted that “in respect of the alien grey immigrant I plead guilty to racial discrimination.”

4. If it ain’t broke…
Despite a significantly higher rate of nucleotide substitution (permanent alterations in the building blocks of DNA and RNA) in most rodents (mice and rats) when compared to primates, squirrel gene mutation and evolution appears to have occurred much more slowly.

5. Don’t care what the weatherman says
Ground squirrels will continue their annual cycles of hibernation regardless of the air temperature. Environmental cues are therefore not necessary for squirrels to start their hibernation, but the exact causes are not yet fully understood.

6. Not just your common or garden variety
There are 285 recorded species of squirrels. These include not just the familiar bushy-tailed tree squirrels, but also marmots, ground squirrels, chipmunks and flying squirrels. So rare and obscure are some species that 54 of them haven’t been photographed. Can you snap those missing squirrels?

8. Red vs. gray
Introduced by the Victorians several times between the years 1879 and 1920, the invasive gray squirrel spread rapidly throughout most parts of Great Britain, practically wiping out the native reds by transmitting a fatal disease, the parapox virus. In the 1950s, the squirrel was thought of as a major pest in Britain, with this view persisting as attempts to control the population have failed.

9. Tails for every occasion
The familiar bushy tails of squirrels perform different roles depending on the habitat of the individual species – serving as warm cloaks for the denizens of northern forests, and as parasols to shade Cape ground squirrels from the fierce heat of the sun in the Kalahari Desert. Flying squirrels use their tails to control the angle of descent and some flying squirrels also use their tails to aid climbing.

10. You can’t be friends with a squirrel!*
*If you’re not deterred, then nuts might not be a bad start.