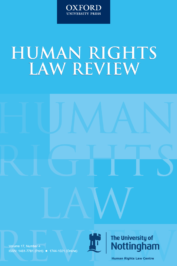 Human Rights Law Review promotes awareness, knowledge, and discussion on matters of human rights law and policy. The Review publishes critical articles that consider human rights in their various contexts, from global to national levels, book reviews, and a section dedicated to analysis of recent jurisprudence and practice of the UN and regional human rights systems.

The right to a fair trial includes, among other elements, the right to procedural due process and the right to be free from discrimination in the trial process. The right to procedural due process includes the right to test the case against you, the right to confront and cross-examine witnesses, the right to free legal assistance, and the right to be informed of the charges against you in a language you understand, among others. In many jurisdictions, once a person is found unfit to plead, they often end up in limbo with no clear process for testing the case against the person, no appropriate legal assistance provided, and no accessible detention facilities available. Alternatively, in some jurisdictions, there are processes in place and once an individual is found unfit, they are funnelled into a ‘special’ trial process, in which evidential rules are different and the individual is often largely excluded from the trial process. While this is arguably more favourable than a state of limbo, these special processes often do not afford the individual the same level of protection for his or her right to due process as a normal trial would.

The right to legal capacity mandates that all people are respected as decision-makers on an equal basis and requires states to provide support to exercise legal capacity – to make legal decisions. Unfitness to plead laws purport to avoid an unfair trial by not forcing people to undergo a trial process on the basis that they cannot sufficiently understand the charges against them and cannot meaningfully participate in the trial process. If states met their obligations to provide support to people with cognitive disability to exercise their legal capacity in the context of the criminal justice system, it could obviate the need for unfitness to plead laws. Instead people with cognitive disability who are charged with a crime would be respected as equal before the law, they would be provided with the support needed to engage in the trial process, and their rights to both legal capacity and a fair trial could be met in many instances.

Dr Anna Arstein-Kerslake is an academic at Melbourne Law School and the Convenor of the Disability Research Initiative (DRI) at the University of Melbourne. She developed, and leads, the Disability Human Rights Clinic (DHRC) at Melbourne Law School. She holds a PhD in Law from the National University of Ireland, Galway (NUIG), a JD from the City University of New York (CUNY) School of Law and a BA in Sociology from San Diego State University (SDSU). She held a Marie Curie Research Fellowship at the Centre for Disability Law and Policy (CDLP) at (NUIG) from 2011 to 2014. Her work on the right to equal recognition before the law has been published widely, including her 2017 book, Restoring Voice to People, published by Cambridge University Press. She was a Chief Investigator on the Unfitness to Plead project (2015-2017), funded as part of the Australian Government Department of Social Services, National Disability Research and Development Research Scheme. Dr Arstein-Kerslake is a co-author of “Human Rights and Unfitness to Plead: The Demands of the Convention on the Rights of Persons with Disabilities”, recently published in Human Rights Law Review.