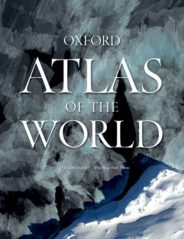 Atlas of the World: Twenty-Fourth Edition

Our polls have officially closed and the results are in: our Place of the Year for 2017 is Puerto Rico. Although it was a tight race between Catalonia and Puerto Rico in both the long- and shortlist polling, the events that have occurred in this Caribbean Island in the past year have truly resonated with our followers who partook in voting.

Puerto Rico has been in recession since 2006 due to a spiraling cycle of public debt – much of it stemming from public corporations such as the government development bank, the transportation authority, the electrical power authority, and the water and sewage authority. However, earlier this year, the island came into the global spotlight when they declared a form of bankruptcy in May. Because Puerto Rico is a Commonwealth of the United States, it was not allowed to formally declare bankruptcy, thus shedding light on the Commonwealth’s political relationship with the United States.

Then in September of this year, Hurricane Maria tore through Puerto Rico and brought about horrific destruction. With the crippled hospitals, lack of safe drinking water, closed roads, and electrical outages island-wide, thousands of Puerto Ricans who were able to leave did just that. Response by the White House was met with great criticism for being too slow and insufficient in terms of relief funding. Two months later, much has improved but it will still be a while before Puerto Rico is back to its pre-hurricane status. Power on the island is still not completely restored, and hundreds of survivors remain in shelters across Puerto Rico.

Between the financial and humanitarian crises facing Puerto Ricans, it has not been an easy year for this Commonwealth. It’s also unclear how the rest of the year will play out in regards to additional hurricane relief. What is sure is that debates will continue between Puerto Rico and the White House regarding debt relief, further hurricane assistance, and whether Puerto Rico should remain in the United States as a territory or a state – or become an independent country altogether.

Read up on our Place of the Year archive, and remember to check back for more posts about Puerto Rico and the other POTY contenders. Let us know what you think of this year’s Place of the Year in the comments below, or use #POTY2017 on social media.

The only world atlas updated annually, guaranteeing that users will find the most current geographic information, Oxford's Atlas of the World is the most authoritative atlas on the market. Providing the finest global coverage available, the Atlas of the World is not only the best-selling volume of its size and price, but also the benchmark by which all other atlases are measured.