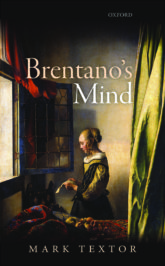 Franz Brentano died on the 17 of March 1917. His main work Psychology from an Empirical Standpoint (1874) combines an Aristotelian view of the mind with empiricist methodology inspired by the likes of William Hamilton and John Stuart Mill. Brentano’s philosophical program was to show that every concept can ultimately be derived from perceptions: he was a concept empiricist. In Psychology from an Empirical Standpoint, the program is applied to the concept of the mental in general, as well to as notions of particular mental phenomena. When one takes Brentano’s empirical standpoint, one relies on consciousness or inner perception as an empirical source of knowledge.

In Psychology Brentano claimed that intentionality is the feature that all and only mental phenomena have. This thesis captured the imagination of several generations of philosophers. So what is intentionality? Consider Brentano’s own illustration to get the initial idea: In presentation something is presented, in judgement something is affirmed or denied, in love loved, in hate hated, in desire desired.

A presentation presents something; it is ‘about’ or ‘of’ something. But the scare quotes signal uneasiness. Post-Brentano, philosophers have tried various ways to sharpen our understanding of intentionality in order to defend his thesis. Brentano himself assumed that intentionality is unanalyzable, but since it is given in consciousness we can have ‘first-hand experience’ of it. You come to know what redness is by looking at red things and attending to their colour; you come to know what intentionality is by recalling your mental acts and attending to them. This reading of Brentano dissolves some problems of intentionality, but is your wondering who won the lottery really in the same or even in a similar sense ‘of an object’ as your visual perception of the tree in your garden?

First, Brentano worked out an Aristotle-inspired metaphysics of what a conscious life is. Is my current conscious life a collection of activities or one activity? Consider an example. In the opera you see and hear the performers at the same time. Brentano’s thesis of the unity of consciousness is that, at a time, seeing and hearing are not two distinct mental acts or activities, but one act that is directed toward several distinct objects. If one becomes conscious of seeing and hearing, the number of objects of one mental act, not the number of mental acts, increases. This implies that one mental act can be jointly of, for example, visibilia, audibilia and itself.

While in the early 2000s self-representationalist views of consciousness had a comeback, Brentano’s original argument for this metaphysics, as well as his particular development of it, has not been properly appreciated. Brentano’s arguments encourage us to free ourselves of the prejudice that a mental act that presents us with several objects must be composed of several distinct acts that each have one object, or have a number of different contents. By taking Brentano’s arguments seriously we gain a new perspective on the metaphysics of consciousness.

Second, Brentano applied his metaphysics to pleasure, arguably the most important mental acts from the standpoint of practical philosophy. He conceived of pleasure as the love or liking of an activity, not, as contemporary authors propose, a desire for sensations. More generally, the primitives of Brentano’s philosophy of mind are presentation, judgment, and love and hate. In contrast, many contemporary philosophers work out a psychology based on belief and desire.

Brentano had guts: he would challenge philosophical orthodoxy again and again. The potential of Brentano’s heterodox ideas has not yet been fully realized. I hope philosophers will take note and be motivated to explore it further.

Mark Textor is professor of philosophy in King's College in London. His main areas of research are philosophy of language and history of analytic philosophy so broadly conceived that it even includes Brentano. Mark Textor is also the author of Brentano's Mind.