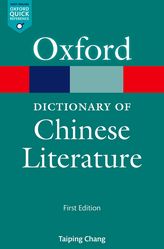 A Dictionary of Chinese Literature

From the Shi jing (Classic of Songs) of the eleventh century BC, to the to the wanglu wenxue (Internet literature) of the twenty-first century, this authoritative dictionary covers key terms relative to the study of Chinese literature, from antiquity to the present day.

Chinese scholars traditionally have considered the Han fu-rhapsody, Tang shi-poetry, Song ci-song lyrics, and Yuan qu-drama, as the highest literary achievements of their respective dynasties. However, Chinese literature embraces a far wider range of writing than these four literary genres. In addition to these “belles lettres”, Chinese literature has developed into a treasure trove that offers rich information about Chinese society, thought, customs, and social and political movements. From Ancient Pre-Qin writing and the emergence of drama during the Yan dynasty—right through to novels responding to the socio-political issues of the 1940s, a rich literary history has developed over three millennia.

The Pre-Qin to Northern and Southern Dynasties

This period, stretching from ancient times to the early medieval period, is marked by two collections of poetry: the Shi jing (Classic of Songs, the earliest anthology of Chinese poetry), and the Chuci (Songs of Chu), an anthology of southern poems of the Warring States and Han periods. This era is also represented by the newly established genre, fu (rhyme-prose, rhapsody), which obtained prominence in the Han dynasty, and continued to be a major genre in the Chinese literary tradition.

Two of China’s standard histories, the Han shu (History of the Former Han) and Shi ji (Records of the historian) are rich sources of information on literature, and two works of the sixth century have become literary classics: the Wen xuan (Selection of Refined Literature), the earliest extant Chinese anthology, and the Wenxin diaolong (Embellishments on the Heart of Literature), traditionally regarded as the most important and influential treatise on Chinese literary theory. During the Northern and Southern Dynasties, palace style poetry, an ornate and gentle poetic style, was in vogue. Religious Daoist and Buddhist writings also flourished.

The Tang and Song dynasties periods

Lasting from the 7th century to the late 13th century, this period was known for rhymed shi-poetry. Regulated verse composed mostly in five—or seven—syllable lines reached maturity in the Tang dynasty and continued to flourish in the Song. Tang poets Du Fu and Li Bo are generally regarded as the greatest Chinese poets. The ci-song lyric, a verse form with distinctive prosodic characteristics first appeared in the Tang dynasty, and reached maturity during the Song dynasty.

During this period some scholars rejected the ornate style associated with the court and advocated a literary reform based on ancient classical principles. The resulting ancient-style prose movement did not involve slavish imitation of ancient style, but rather an innovation that was informed by ancient ideals of clarity, originality, and practicality.

The Yuan, Ming, and Qing dynasties

These dynasties, ruling from the 14th century to the late 19th century, are known for the emergence of drama and vernacular fiction. In the Yuan the form known as qu, which means ‘colloquial song’, ‘dramatic aria’, and ‘drama’ emerged. During the Ming and Qing periods, classical and vernacular novels became the dominant literary forms. Works such as Water Margin, Romance of the Three Kingdoms, Journey to the West, and Story of the Stone are among the best-known works of pre-modern Chinese literature. Chuanqi (Southern play or drama) is another popular dramatic form of this era. In the Ming dynasty, literary groups battled against antiquarianism and plagiarism. They condemned poets and prose writers who blindly imitated the writers of the Tang and Song periods; they believed that ‘spirit’ and ‘vital energy’ were the essence of literature.

In this period, lasting from 1911 to 1945, The May Fourth Movement (an anti-traditional cultural and political campaign) is considered the watershed separating China’s premodern and modern eras. The movement opened the door to Western literature and Western concepts of science and democracy. Writing in everyday spoken language instead of the traditional classical language was encouraged. Xinshi (new poetry) no longer followed prescribed patterns, allowing the poet room for expression of personal sentiments. During this period a significant amount of Western works was translated into Chinese. Chinese writers no longer concealed their sentiments, and even wrote about the struggle between traditional ethics and natural human desires.

After World War II, during the conflict between the Communists and Nationalists, writers began to write about social and political problems in a form designated as “reportage literature.” In later years, reportage literature was infused with new life, covering all subjects from current events to modern social life. Since the late 1970s, poets began to write “poetry of opacity“, in which they did not follow the standard grammatical patterns, and used language that is often vague and incomprehensible.

After the Cultural Revolution (1966-1976), more readers turned to martial arts novels searching for heroes with lofty principles and ambitions. Since then, martial arts fiction has become the most widely read literary form of modern Chinese literature. When the internet age arrived in the late 1980s, writings designated for publication or distribution via the internet or in an interactive online context came into fashion. Internet literature, including blogs and literature in the form of email, has become popular among younger readers.

Taiping Chang, born in Taiwan, and educated in Taiwan and the United States, received her BA in Chinese literature and MA in comparative literature from Tunghai University, and PhD in classical Chinese and oracle-bone inscription studies from the University of Washington. She was the founder and publisher of Asia Pacific Business Journal, and has also served as an academic advisor to many universities and institutions. She is the author of A Dictionary of Chinese Literature. Her current research projects focus on Chinese literature, business culture, and traditional Chinese arts.