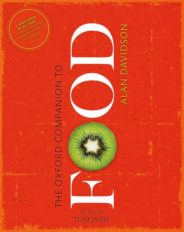 The Oxford Companion to Food

To celebrate Thanksgiving this year, we’ve asked Oxford employees to share their holidays traditions. Referencing The Oxford Companion to Food, we put together a slideshow of fun food facts to accompany some of our favorite traditions.

Marissa Lynch is a Marketing Assistant for Oxford University Press.

Alan Davidson was a distinguished author and publisher, and one of the world's best-known writers on fish and fish cookery. In 1975 he retired early from the diplomatic service - after serving in, among other places, Washington, Egypt, Tunisia, and Laos, where he was British Ambassador - to pursue a fruitful second career as a food historian and food writer extraordinaire. Among his popular books are North Atlantic Seafood and Mediterrranean Seafood. In 2003, shortly before his death, he was awarded the Erasmus Prize for his contribution to European culture.

Tom Jaine is an independent writer and publisher, specializing in food and food history. He is the author of numerous books, including Cooking in the Country, Making Bread at Home, and Traditional Country House Cooking. He frequently writes for The Times, The Guardian, the Sunday Telegraph, the Evening Standard, and many magazines and journals. He was editor of The Good Food Guide from 1989 to 1994, has presented 'The Food Programme' on Radio 4, and has participated in discussions of food on radio and television.

Alan and Tom are the editors of The Oxford Companion to Food, Third Edition.