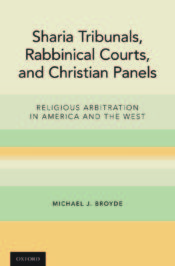 Since the 1924 Federal Arbitration Act, American law has evolved from offering only one venue and law for dispute resolution to permitting numerous options, including laws of different legal systems to resolve disputes through binding arbitration. In essence, the idea is that people can agree to resolve disputes not only in a court under American law, but also in arbitration and in accordance with any set of rules to which the parties agree. Parties can rely on arbitration because the law allows them to turn to the courts for enforcement of the arbitrators’ decisions.

The virtue of this approach generally is clear: if people want to do business according to French law, or Jewish law, and they sign a contract agreeing to that, the legal system ought to respect their choices. And if they agree that they want disputes resolved by French lawyers they agreed to, or three rabbis they selected, we ought to give people the freedom to resolve disputes as they wish. Arbitration’s essence is contract.

This model has enabled the development of a thriving Jewish law court system within the United States: indeed, religious Americans resolve disputes with others pursuant to the norms and values of their respective religious traditions in many faiths.

We should expect to witness a rise in religious arbitration. As the common social fabric in America has shifted to a secular model, many religious people no longer see the legal system as reflecting their values. Religious arbitration becomes a way that people can agree to enforce their values. Consider adultery in American divorce law as an example: once illegal, then financially penalized, and now, in most states, legally inconsequential. Religious couples may instead want their marriages governed by the rules of their faith, and sign a prenuptial agreement to this end penalizing adultery. Then, in the event of a divorce, they may prefer religious arbitration, where the person judging shares the values by which they have chosen to live.

How does our legal system prevent this? Three ways:

All of these lessons were learned by rabbinical tribunals over the last half century and have contributed to their success in America. The fears about Sharia Law and Islamic courts could be real, but Islamic tribunals can implement the same protective measures used in rabbinical courts if they wish. Such would prevent the many abuses highlighted by various news articles over the last decades and lead to more legally acceptable Islamic courts.

Islamic adaption to American arbitration law norms would be good for secular and religious America and American Muslims. By permitting religious communities to conduct private faith-based dispute resolution within clear American law limits, there is a chance that religious and secular segments of society and culture will engage in conversation that moderates its extremes. The fanatically religious community would benefit from these conversations, as would virulently secular society. The interactions — between secular courts and religious arbitration panels, and between religious and American laws — hold out the possibility that American society may be able to temper the more extreme tendencies of both Islamic practices and the secular legal system by encouraging religious communities to grow from their interactions with America, while allowing America to learn from the best of many religions.

Michael Broyde is a Professor at Emory University School of Law and Projects Director in its Center for the Study of Law and Religion. He is also a rabbi who has served in many prominent rabbinical roles, including as a synagogue rabbi and Director and Judge in the Beth Din of America, the largest Jewish Law court in America. He is the author of Sharia Tribunals, Rabbinical Courts, and Christian Panels: Religious Arbitration in America and the West (Oxford 2017).