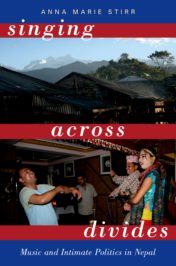 Singing Across Divides: Music and Intimate Politics in Nepal

Nepal’s rural hills are famous for the all-night songfests in which conversational dohori and other folk songs are sung, much more so than the Kathmandu Valley. But there are a few places in the capital city and surrounding valley that also have long traditions of gathering and singing at religious festivals. During the years of civil war (1996-2006), these gatherings were sometimes cut short: in August 2005, I watched as the army shut down groups of singers at Patan’s Krishna temple at the festival of Krishna Asthami. But by August 2006, singers had been able to spend the night at the temple undisturbed. In July 2007, I was able to participate in the informal singing at Swayambhunath, on the holiday of Srawan Sakranti, the first day of the lunar month of Srawan.

I stood at the base of the stairs leading up to this Buddhist temple on the northwestern outskirts of Kathmandu. All around me were groups singing dohori: improvised couplets in conversation with each other, some groups in Nepali, some in the Tamang language. Groups would gather around someone with a madal drum, onlookers pressing in to hear the lyrics, a few dancers twirling in the middle of the circle. If a song ended, the group would slowly dissipate, until another pair of singers began a new song, a circle forming anew. It was late afternoon, and dohori songs had been echoing around Swayambhu all day. One new group formed at the base of a tree. They sang in Nepali, in the song style known as Kathmandu-area kathe gīt.

A young girl and a woman in her twenties danced in the small space in the center of the circle. A young man sat on the ground with the madal, playing it while he sang. A young woman sat across from him, answering his song. They improvised their couplets to the tune of a 2006 hit, “Home in Chhauni” (chhauni literally means barracks, but here it refers to a place, an area of Kathmandu), while bystanders joined them, joining in on repetitions of couplets and refrains, dancing and applauding, hooting and hollering:

The song these two sang is emblematic of ordinary festival dohori, variations of which are performed in many places throughout Nepal’s hill regions. It was sung in a public, all-ages space, using the tune of a recent hit in a style specific to this area of Nepal. The singers sang of love, but their words were likely not meant seriously. The fun of the song was in imagining a possible relationship, in coming up with couplets in response to one another, and also in singing and dancing together. I didn’t know the singers—did they know each other? Had they even met before? Were they actually romantically involved? Would they frame this song as a binding contest, in which the loser would owe the winner something, or as the lore has it, marry the winner?

Outsiders could not tell, and that was part of the fun. The group crowded around the singers, delighting in dancing to refrains and listening to couplets. Success in improvising couplets meant perfect adherence to meter and end rhymes, and pleasing the audience by fulfilling or thwarting narrative expectations. The girl’s response “whatever I have, it’ll be as God wishes” is a fulfilling response, in which she performs an accepting type of femininity and religious devotion. The boy’s subsequent statement that he needs a daughter thwarts expectations, an unorthodox statement in a culture of strong son preference. Both types of couplets engage their song-partners and broader audience in the shared pleasure of language play, along with dancing and singing together to the beat of the madal. Like the majority of festival dohori, this did not turn out to be a binding song, and it ended with nothing but words and mutual pleasure exchanged.

Wherever they are held, these festivals are more than just times of religious worship. They are reasons for people to meet, known especially as times for young people to flirt and get to know each other, and dohori singing is one of the ways in which this is done. Rituals of worship, of acknowledging the movement of the seasons, and of courtship thus coincide. Through heightened signification, these rituals frame an extra-ordinary space and time of performance. Yet the song-world is more than simply a space to comment on life, or to imagine new possibilities. Enjoyable and novel juxtapositions in the performance frame can engender new feelings of belonging (and sometimes romantic relationships) across social divides and among strangers, remaining intimately connected with ordinary life.

Anna Stirr is Assistant Professor of Asian Studies at the University of Hawaii at Manoa. She is an ethnomusicologist specializing in music of the Himalayan region. She received her PhD in Ethnomusicology from Columbia University, and has been part of music, anthropology, and Asian Studies departments at Oxford University and Leiden University. She is a performer as well as a scholar of lok dohori, and sings and plays several instruments. She is the 2016 recipient of the Ali Miyan Prize in Folklore for her research and performance of Nepali folk music.