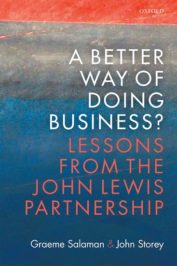 A Better Way of Doing Business

In recent years, many things have gone wrong with the conventional ways of organising and conducting business. And the problems persist; indeed they have spread and become endemic. These include short-termism, insecure work, extreme disparities in rewards and life chances, ethical failures, dishonesty and manipulation, and periodic hollowing-out followed by corporate collapse and wider economic crises.

The system has, in many ways, become self-defeating and unstable even in its own terms. The single-minded pursuit of shareholder value courts a tolerance of malpractice which sets the scene for a race to the bottom. At the heart of the system is the model of the modern corporation. In many ways, it now seems unfit for purpose in the context of the global economy. The John Lewis Partnership is illustrative of an alternative approach: one which seeks to balance the interests of multiple stakeholders; which distributes knowledge, power and reward more widely; and one which enables at least some democratic accountability.

It might be thought that the JLP model is already well-known: a popular, middle class retailer, offering quality goods and dedicated customer service from owner-partners. But, from our long engagement with the organisation, we conclude that the JLP phenomenon is more complex and more interesting than these well-known features portray.

The Partnership is dedicated to the dual objectives of partner happiness and a successful business. Many insiders believe that the one drives the other. So, it is not a choice between ‘nicer or better’ but both — in a mutually, reinforcing way. However, this practice is not so straightforward. We find that the model does not automatically deliver the goods. Indeed, there have been periods when the organisation was considered dated, dowdy, and plagued by complacency.

The organisation is not answerable to the City and can thus pursue longer-term objectives. It can, and does, use its own assets to invest and also borrows for the same reasons. The strategic choices around allocation of resources between investment for the future, rewards to partners in the form of salaries and the annual bonus, the pension fund, and customer service, represent ongoing tensions.

The key to success is found in the skillful ongoing attention to managing these tensions. But, the enabling platform to their actions is provided by the Articles of Association and the Constitution, the culture, and the cultivated set of expectations which nudge directors into (mainly) doing the right thing.

So, could other businesses adopt this model? In part yes. JLP point the way to the how and to the rewards. However, many business owners will baulk at the prospect of adopting the full package which requires the sharing of ownership and of power. Instead, partial cherry-picking seems likely to be (at best) the chosen path.