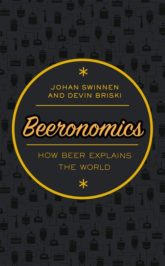 Beeronomics: How Beer Explains the World

Beer drinkers across the United States observe the National American Beer Day annually on 27 October. Over the last few decades IPAs, craft beer, and microbreweries have taken over the American beer market and continue their steady growth.

The following extract from Johan Swinnen and Devin Briski’s Beeronomics: How Beer Explains the World discusses some of the strategies of the American craft beer movement.

Northern California has long hosted many a tour of intoxicants: first, through the fertile Sonoma and Napa county vineyards famous for deep red Zinfandels, and then further along to California’s “Emerald Triangle” of Humboldt, Mendocino, and Trinity counties. Microbreweries and brewpubs are relative newcomers on this terrain, though they’ve quickly established their niche among the mannered locavores’ less coherent cousins—the locaholics.

As the story goes, India pale ale (IPA) was born of the imperial age, at the dawn of globalization, when English beer producers figured out that beer would last longer on boat rides if they increased the amount of hops and the alcohol content in their pale ales. How ironic, then, that what started as a preservation strategy has become a regional hallmark for many breweries in northern Californian. It is in this region that “hop heads”—Sierra Nevada brewery’s affectionate term for drinkers chasing ever-higher IBU (international bitterness unit) levels—get their back-of-the-tongue fix. Picturesque coastal highways weave through vineyards while towns offer visitors the opportunity for a lineup of West Coast IPAs so strong they’ve become a style of their own. With recent growth and acquisition by Heineken, Lagunitas’ IPA has gained national attention. Local visitors can enjoy increased access to smaller release batches of its IPA Maximus and Hop Stoopid brews. This is a brewery that considers their 47 IBU Dogtown brew to be the standalone pale ale. For comparison, Budweiser has an IBU of 7.

But kingpin of the region is undoubtedly Sierra Nevada, singlehandedly making its hometown of Chico a tourist destination and leading the way nationally with its double IPA Torpedo—the top-selling IPA in the United States, and the product of founder Ken Grossman’s wonkiness, utilizing a torpedo machine to double the bitter flavor. The national bestseller is sold locally alongside an experimental floral IPA with rose extract added to the aromatic hops, only slightly less bitter than the brewery’s notorious Hoptimum. These styles offer a visceral departure from the light lagers that American macrobreweries have been peddling in conjunction with the NFL for so long. These days, flagship brews are almost overwhelmingly top-fermented ales, and are frequently IPAs—diverse brews with dark, complex flavors and high alcohol content. And they’re more expensive—a six-pack of Lagunitas costs about the same as a twelvepack of Bud Light. And they’ve been a runaway success. The American domestic market share for craft beer has been increasing steadily since the mid-1980s. But it took the Great Recession in 2008 to offer a first indication that California crafts were here to stay. Sales of the craft sector climbed from $5.7 million in 2007 to $12 million in 2012. This growth happened during a period when the beer market continued to shrink and sales for imported beers like Heineken and Stella Artois took a nosedive. During this span of time, sales of Sierra Nevada increased 23% and Lagunitas more than tripled their output.

Now, the million dollar question surrounding the future of American beer is how, exactly, microbreweries will manage to turn their significant size constraints into their biggest competitive advantage.

Nestled at the bottom of Potrero Hill, positioned with a full view of the famous harbor for which the city is named, stands Anchor Brewery. This is one of six locations the brewery has occupied in recorded history, all as a San Francisco institution embodying the weight of its name.

Founded in 1896, Anchor is the only brewery to continue brewing San Francisco’s regional “steam beer.” Though the exact origins of steam beer are somewhat a mystery, the style may refer to the nineteenth century practice of lagering vats on roofs so the city’s famous nighttime fog would cool them, creating a steam-like effect. The amber beer is brewed using lager yeast while fermenting in warmer ale-like temperatures. Anchor Brewery revived the steam beer for local consumption after prohibition. The brewery was shut down in 1959, sold and reopened in 1960, then sold again in 1965 because of struggles with finances. The third time was the charm: none other than Fritz Maytag, heir to the household appliance fortune, bought a 51% controlling share in the brewery within a few hours of visiting. Maytag is something of a spiritual godfather to the craft beer movement, and Anchor is considered the “first craft brewery.”

His vision was radical amid a culture resistant to change. The vanguard for small breweries at that time was the Brewers Association of America (BAA), founded during World War II by Bill O’Shea. In 1940, there were 684 breweries producing 54.9 million barrels of beer a year. When Maytag bought Anchor, the number of breweries had fallen to 197 producing double that amount of beer. By 1980, there were only 101 breweries but production had nearly doubled again, to 188.1 million barrels—the top five breweries produced more than three-quarters of that. Americans were drinking more beer than ever, but this beer was coming from a falling number of increasingly large-capacity macrobreweries.

Johan Swinnen is Professor of Economics and Director of the LICOS-Centre for Institutions and Economic Performance at the KU Leuven, Senior Research Fellow at the Centre for European Policy Studies (CEPS) and a Visiting Scholar at the Centre for Food Security and the Environment (FSE) at Stanford University. He is a Fellow of the AAEA and the EAAE, was President of the International Association of Agricultural Economists (2012-2015) and is President of The Beeronomics Society. He was previously Lead Economist at the World Bank (2003-04) and Economic Advisor at the European Commission (1998-2001).

Devin Briski is an MS candidate at Columbia Journalism School. Previously she worked on the publishing and marketing team of Stanford Social Innovation Review. She is a cofounder and regular contributor of online magazine The Ventured Life, and earned a bachelor's degree in sociology from Columbia University, where she worked as writer and editor for Columbia Daily Spectator.

Swinnen and Briski are the authors of Beeronomics: How Beer Explains the World.