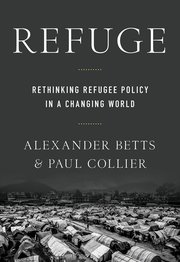 Global refugee numbers are at their highest levels since the end of World War II, but the system in place to deal with them, based upon a humanitarian list of imagined “basic needs,” has changed little. In this excerpt from Refuge: Rethinking Refugee Policy in a Changing World, authors Paul Collier and Alexander Betts explain the cause and effect of mass violence, a far too common pre-cursor to refugee crises and global displacement.

People seeking refuge are not fleeing poverty, they are fleeing danger. The flight for refuge happens when a society ceases to provide security for its people. For one reason or another, it falls into violent disorder. During the decade 1935– 45 Europe fell into such disorder. The rise of fascism made Germany dangerous for Jews, and triggered a civil war in Spain. An analogous ideology in Japan supported an invasion of China. Each of these events created huge civilian dislocations. Then the Second World War ravaged entire regions. But the dangers that have produced the current vast refugee problem have had very different origins.

This, indeed, is the first big awkward fact about mass violence: many different circumstances can bring it about. Violent societies are analogous to Tolstoy’s unhappy families: they each become violent in their own way. They are best defined by what they are not: safe for ordinary people.

No society is completely safe. In the United States black men face a heightened risk of being shot by the police; in Saudi Arabia adulterous women are at risk of being stoned; in Russia it would be unwise to denounce President Putin. Each of these is reprehensible, and a worthy focus of concern. In some cases, when individual risk is severe and targeted, people may need to seek asylum. But, for the most part, this is not what is driving the flight to refuge – it is vital to distinguish mass violence from such manifestations of individual insecurity. Mass violence is rare; insecurities are pervasive. A failure to delineate mass violence properly would drive us to seek ‘solutions’ in the construction of some imagined idyllic society: idealized versions of Sweden or Montana according to taste. The desperation that leads people to abandon their homes to seek refuge is too serious a phenomenon for such romanticism. So our focus is on the circumstances in which a society collapses into mass violence; not those in which awful things happen to some people.

Even with this tourniquet around the problem, mass violence has numerous causes.

The traditional source of violence is inter- state conflict. The violence that dislocated civilian life in China in the 1930s, Russia in the 1940s, and Korea in the 1950s happened because of invasions from hostile neighbours. Hence, one condition for security is that a country be sufficiently strong militarily to protect itself from invasion by foreign enemies. Many countries may not even have such enemies.

If mass violence is not brought from abroad, it must originate at home. Such disorder is unusual and only comes about if two very different sources of internal security both fail at the same time.

The most attractive source of internal security is legitimacy. Most states, whether democratic or not, have sufficient legitimacy in the eyes of their citizens for people to be willing to comply with the rules. Those states whose legitimacy is accepted by a large majority of citizens need far fewer resources in order to enforce their rules. Britain can get by with a small and unarmed police force; North Korea needs the capacity for state violence against individual citizens to be so substantial as to be a constant reminder.

Yet, despite lacking legitimacy, North Korea has not collapsed into mass violence. Kim III maintains order in the same way as Kim II and Kim I: by brute repression. Brute repression threatens mass violence against citizens: were there to be an uprising, people would probably be slaughtered in their thousands, but the threat is latent. It is so awful, and so credible, that it does not need to be used.

Evidently, what matters for domestic security is the extent of state legitimacy relative to the capacity of the state for coercive force. All states need some coercive force because no government, however inclusive and responsive, wins universal acceptance. All societies include recalcitrant oddballs who regard their grievances as licence for violence. On conventional criteria, Sweden in the 1980s is about as close as any state has ever come to Earthly perfection. But this did not prevent its Prime Minister, Olof Palme, from being shot dead in the street. Both legitimacy and coercive force reduce the risk of collapse into mass violence, and so there is a trade- off. A state can maintain the security of its citizens with very little coercive force if it has high legitimacy, or with very little legitimacy if it has sufficient coercive force.

In delineating the conditions for security we have also delineated its antithesis: fragility. A fragile state is a poor country marked by weak state capacity and legitimacy. There is a striking correlation between levels of fragility and levels of displacement. Fragile states are those that have no defence against mass violence. They are not invariably beset by mass violence: but each is a house of cards.

Fragility is the single most salient cause of displacement around the world today. Even factors that may become increasingly common drivers of flight like climate change and natural disasters are only likely to cause mass cross- border movements if they affect fragile states. When Hurricane Katrina struck New Orleans it did not require people to leave the United States. In contrast, when the earthquake struck Haiti many people fled to the neighbouring Dominican Republic because they could not find a domestic remedy or resolution to their situation.

Our opening question, however, was not ‘which states are fragile?’ but ‘why has mass violence increased?’ In effect, why might exposure to fragility have increased despite the wide diffusion of global economic growth?

Featured image: The Sahrawi refugees – a forgotten crisis in the Algerian desert, by the European Commission DG ECHO. CC-BY-SA-2.0 via Wikimedia Commons.

Paul Collier is Professor of Economics at St. Antony's College, Oxford. His book The Bottom Billion has won the Lionel Gelber Prize, the Arthur Ross Prize awarded by the Council on Foreign Relations, and the Corine Prize.

Alexander Betts is the Leopold W. Muller Professor of Forced Migration and International Affairs at the University of Oxford, where he is also Director of the Refugee Studies Centre. He has previously worked for UNHCR and as a consultant to a range of international organizations and governments.

Together they authored Refuge:Rethinking Refugee Policy in a Changing World.

Human Rights Day: a look at the refugee crisis [excerpt]