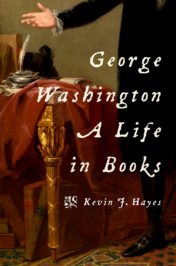 George Washington: A Life in Books

Unlike his contemporaries Thomas Jefferson, Benjamin Franklin, and Alexander Hamilton — George Washington isn’t remembered as an intellectual. But for what he lacked in formal education, Washington made up for in enthusiasm for learning. His personal education began at an early age and continued throughout his adult life. In the following excerpt from George Washington: A Life in Books, historian Kevin J. Hayes gives insight into Washington’s early love of literature.

Cubbyholes are magical spaces. Store something in a cubbyhole, and it just might transform itself into something else. Well, that object doesn’t really change, but the times change, and so does the person who stored it there, either of which amounts to the same thing. Above the topmost bookshelves in his permanent library at Mount Vernon, George Washington had dozens of built-in cubbyholes, or pigeonholes, as they were called in his day, that is, before that word became a verb and took on pejorative connotations. In those dark compartments he stored many personal papers, some dating back to his adolescence. The manuscripts that Washington saved since his school days in the 1740s became something very different by the end of his life. They transformed themselves into a blueprint of his mind.

Humphreys’s precise language offers a good idea of the kind of teacher Washington had as a boy. Typically, affluent families alone could afford domestic tutors for their children. As the job title suggests, the domestic tutor was a live-in teacher who accepted room and board, along with a modest salary. Washington’s tutor taught grammar, logic, rhetoric, geometry and higher mathematics, geography, history, and additional “studies which are not improperly termed ‘the humanities.’” The name of Washington’s domestic tutor has escaped history. Considering the eclectic nature of the surviving school exercises, his editors suggest that Washington had several teachers.

Further evidence shows that at one point in his education Washington did attend school with other boys. Friend and fellow patriot George Mason mentioned to him a man named David Piper, whom he described as “my Neighbour and Your old School-fellow.” Like Washington, Piper would turn to surveying once he left school, becoming surveyor of roads for Fairfax County. He was also something of a bad boy. Piper was repeatedly brought to court on various civil and criminal matters. Together Washington and Piper could have attended school at the Lower Church of Washington Parish, Westmoreland County, where Mattox Creek enters the Potomac River, but there is no saying for sure. The story of Washington’s education is shrouded in mystery.

His school exercises indicate what he studied inside the classroom and out. They show him mastering many different subjects, learning what he would need to make his way through colonial Virginia whether that way took him down a deer track or up Duke of Gloucester Street. Some of the exercises are dated, revealing that this set of school papers as a whole ranges from 1743 to 1748, that is, from the year Washington turned eleven to the year he turned sixteen. Other evidence demonstrates that he continued his studies beyond the latest exercises in the manuscript collection. Altogether the exercises and the books Washington read during his school days reveal his early literary interests, his fascination with mathematics, and the genesis of his career as a surveyor.

Washington became curious about poetry in his youth, as two manuscript poems that survive with the school exercises reveal. When he first read these poems, he transcribed them to create personal copies he could reread whenever he wished. His copies reveal Washington’s ambition to excel in penmanship, and their texts shed light on his state of mind at the end of adolescence.

One is titled “On Christmas Day.” Given its subject, the poem’s imagery is predictable. It is filled with happy shepherds and hymn-singing angels watching over the newborn savior. The speaker of the poem is female; she ends by reminding herself to remember Christmas always.

The bottom corner of the page containing Washington’s transcription is torn, so the last two lines of verse are damaged. His source supplies the missing words:

But pay in graitfull praise her Annual Debt

When Time, and Sin, and Deat[h, shall be no more!]

The picture of young Washington that emerges from his copy of this poem is that of a boy confident in his religious beliefs but pleased to have another confirm them. This Christmas poem is akin to a Christmas present, something to treasure for itself and for what it symbolizes. Washington recorded neither his source nor the poet’s name, but “On Christmas Day” comes from the February 1743 issue of the Gentleman’s Magazine. The published poem is signed “Orinthia”—the pseudonym for Elizabeth Teft, a Lincolnshire poet. The transcription also reveals Washington’s fastidiousness. In the Gentleman’s Magazine, editor and publisher Edward Cave capitalized each line of the poem but avoided capitalizing other nouns. Copying the poem for himself, Washington capitalized the nouns Cave had left uncapitalized, giving the written text a more traditional look.

Kevin J. Hayes, Emeritus Professor at the University of Central Oklahoma, now lives and writes in Toledo, Ohio. He is the author of several books including The Road to Monticello: The Life and Mind of Thomas Jefferson,  A Journey through American Literature, and George Washington: A Life in Books. He is the recipient of the Virginia Library History Award presented by the Library of Virginia and the Virginia Center for the Book. He is also the recipient of research fellowships from the Boston Athenaeum, the Library Company of Philadelphia, the Lilly Library, the Robert H. Smith International Center for Jefferson Studies, and the Virginia Historical Society.