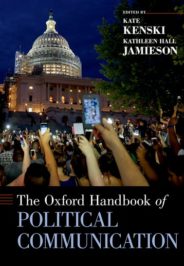 The Oxford Handbook of Political Communication

President Donald Trump’s description of Confederate statues as “beautiful” merely mirrors his previously-mentioned objects of aesthetic preference. Before the statues, there was the “beautiful wall,” an oddly-conceived barrier prospectively bedecked with a “beautiful door.” Still earlier, in a more expressly deconstructive vein, and when the erection of Trump Tower had required prior demolition of the Bonwit Teller building in Manhattan in 1980, Mr. Trump’s artful response was to jackhammer its widely-prized art relief into dust.

For Donald Trump, this treasure, that had been singled out for rescue by the Metropolitan Museum of Art (the loss was lamented, among others, by Ashton Hawkins, then Vice-President of the Met’s Board of Trustees) was just not sufficiently beautiful to preserve.

But it’s not just about walls and buildings. Mr. Trump’s most frequent references to beauty have had to do with women. By themselves, of course, such references are not intrinsically wrong or objectionable. Rather, the problem has been (1) the stunning inappropriateness and choice of words of the pertinent occasion – most recently, his plainly obtuse remark to Madame Brigitte Trogneux, French president Emmanuel Macron’s wife, that she is “in great shape” or, (2) the implicit reciprocal of all such compliments. This “flip-side” reciprocity, which has not always remained diplomatically implicit (e.g., Trump’s disparaging comments about Carly Fiorina, during the presidential debates) is that women who are not beautiful, according to Mr. Trump, are obviously less worthy.

Other things “beautiful” to Donald Trump include gold-plated toilet accessories, and the “great people” attending his “rallies.” Here, the cheerfully rancorous festivities invariably begin with the president acknowledging the noteworthy beauty of his faithful listeners. The point for participants, however, and certainly the only point, is to revel in the contrived warmth of a thoroughly reassuring mass.

This Trump convened gathering offers uniquely special comfort to each and every chanting member. It does this by renouncing all bewildering complexities of science or intellect, thereby reducing any hard-to-fathom national or personal difficulties to a far more manageable list of “enemies.” Why, after all, trouble oneself with sorely difficult analytic tasks if a readily available alternative is simply to identify “those responsible.”

Donald Trump’s steeply corrupted ideas of beauty could lead us not toward any reasonable expressions of truth.

Moreover, if there are hideous things on this fractured planet that are distressingly lacking in beauty, according to Donald J. Trump and his still-adoring fans, science and intellect would be at the very top of this second list.

“Intellect rots the brain,” shrieked Joseph Goebbels to fevered Nazi rallies in Nuremberg in 1935. With little doubt, such earlier “insights” would resonate deeply with today’s Trump followers, and with their leader’s curious idea of beauty.

Nonetheless, this persistently blatant lack of meaningful content had literally nothing to do with its reception by the mass, which was unerringly enthusiastic and grateful. Perhaps the best way to gain any genuine insight into this historical disjunction between truth and “beauty” is to recall or revisit Charlie Chaplin’s closing speech in The Great Dictator. It remains a brilliantly timeless parody of seemingly profound oratory.

More than anything else, Donald Trump and his steadfast rally adherents loath anything cerebral or intellectual; no one even marginally respects the promisingly great beauty of serious ideas. Within this demeaning “crowd” (a term once favored over “mass” by the 19th century Danish philosopher, Soren Kierkegaard), each member tremulously holds all notions of “mind” at a safe distance, that is, in pleasingly stark contempt.

Beauty, in the final analysis, must lie within an authentically valued sphere of unfettered contemplation and reflection. Always, it should conduct us gracefully into a world of harmony-generating thoughts, and not toward hideously primal screams of hatred or howls of execration. Left embedded in presidential power, Donald Trump’s steeply corrupted ideas of beauty could lead us not toward any reasonable expressions of truth, but rather to a conspicuously ugly future of bonfires, book burnings, and perpetual conflict.

Surely we are much better than any such narrowly incendiary visions.

Louis René Beres (Ph.D., Princeton, 1971) is the author of twelve books and several hundred articles dealing with social thought, philosophy, international relations, and international law. He was born in Zürich, Switzerland, at the end of World War II. Professor Beres' has written for many publications including The New York Times; The Atlantic; Yale Global Online; Bulletin of the Atomic Scientists; Jurist; US News & World Report; The Hill; The Daily Princetonian; The Jerusalem Post; and Harvard National Security Journal.