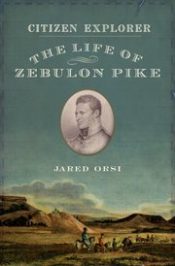 On 15 July 1806, Lieutenant Zebulon Pike departed St. Louis at the head of a military expedition to explore America’s public lands. The recently acquired Louisiana Purchase as yet held no states and almost no private property owners—at least not in the Lockean sense by which the country conferred exclusive individual rights to pieces of land. The expedition’s anniversary confers an opportunity to meditate on public lands through the eyes of early Americans such as Pike and President Thomas Jefferson.

That July, most of the several major western expeditions that Jefferson launched during his presidency had returned, bearing news of tantalizing discoveries. His most famous, headed by Meriwether Lewis and William Clark, was bobbing homeward on the rivers of Montana. The last, commanded by Pike, received its instructions from General James Wilkinson, a notorious shyster who nevertheless gave Pike instructions similar to Lewis and Clark’s: meet the people who live there, persuade them to be our friends, and see what’s useful out there. It was, essentially, an errand to turn public lands claimed into public lands controlled and to help the national government figure out what to do with them.

Pike visited Pawnees on the Great Plains, attempted to climb Pikes Peak, and explored the southern Rockies, before falling into the hands of Spaniards in that disputed space where American public lands met the Spanish crown’s. After a Spanish escort across Texas to the United State, Pike reported to Jefferson and Congress on what he had found. Native peoples, he said, considered the lands theirs. Some were friendly to the United States, and some were resistant. All would have to be wooed before the republic could use the land. Even then, it held little value for development. Missouri looked promising, but the rest reminded him of African deserts. Traveling during one of the West’s episodic droughts, he called it “barren” and “parched.”

Its uselessness, however, might be useful. Uninviting, infertile Louisiana might be a brake on the expansion of private land ownership and thus a reserve against the widely feared possibility that a republic could not hold the loyalties of a people flung across a large geographical extent.

Pike, then, envisioned some lands reserved for Indians, some dispersed to settlers, and some to be left alone as a buffer between them.

His ideas mirrored Jefferson’s. Famous for writing the Declaration of Independence and engineering the Louisiana Purchase, Jefferson left an equally important, though less renowned, legacy through the Land Ordinance of 1785.

Conceptualized by Jefferson, the act established a systematic process by which land owned by the national government would be surveyed into a grid of parcels of equal size and congruent shape. Most plots would be dispersed at inexpensive prices to private claimants, but one of every thirty-six would be reserved for a township and another for a school.

Variations of this combination of dispersal and reservation have unfolded ever since. Congress passed, amended, and repassed numerous homestead acts to transfer the public lands into private hands. Railroads secured grants of land, which they sold to pay off the bonds for laying track. Colleges, such as the one where I work, were founded with the proceeds of sales of federal land grants to states, supplying democratic, low-cost, practical higher education in agriculture, engineering, water development, mining, military science, and teacher education.

The federal government reserved some lands for water rights. Along international boundaries, a strip of public lands facilitated border enforcement. Tribal reservations were carved out of still other national holdings. In the late nineteenth-century, cutover forests, eroded soils, and tawdry tourist traps spurred the federal government to create national forests, national parks, and other landscapes managed toward publicly desired outcomes.

Various as these purposes were, all fit within Jefferson’s original flexible design of surveying public lands, reserving some, dispersing many, and managing all.

Two lessons can be found in these events. First, the architects and implementers of the U.S. public lands system envisioned it would be an engine of development but not that only. By many purposes national lands might serve the interests of the American people. The second lesson is simply history. Americans’ objectives for their public lands have changed over time. What made sense in 1785 differed from the republic’s needs during the Civil War. Neither era perfectly anticipated the Progressive Era or twenty-first century. Jefferson could not have imagined the value of railroad grants or national parks, but he designed a system flexible enough to accommodate the dreams and schemes of subsequent Americans who did.

Jared Orsi is Associate Professor of History at Colorado State University. He is the author of the prizing-winning Hazardous Metropolis: Flooding and Urban Ecology in Los Angeles.