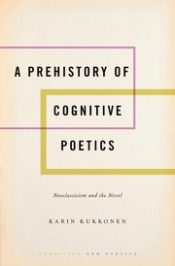 A Prehistory of Cognitive Poetics: Neoclassicism and the Novel

The novel Le Bâtard de Lovelace et la Fille Naturelle de la Marquise de Merteuil, published by Jean-Pierre Cuisin in 1806, proposes a thought experiment. Readers trace the intrigues and amorous adventures of the libertines through a series of letters in which they disclose their scandalous exploits to each other. The epistolary format is the same as in the two novels that have inspired Cuisin: Samuel Richardson’s Clarissa (1747-1748), in which the libertine aristocrat Lovelace challenges himself to seduce the virtuous bourgeoise Clarissa, and Pierre Choderlos de Laclos’ Dangerous Liaisons (1782), in which the Marquise de Merteuil and the Vicomte de Valmont engage in games of seduction that eventually lead Valmont to discover his own sentiment. Things go poorly for the libertines in Richardson and Laclos; both Lovelace and Valmont die in a duel, and the Marquise de Merteuil is socially disgraced.

Cuisin picks up on the structural similarities between Richardson’s and Laclos’ novels, in which Lovelace and Valmont discover the emotional intensity of sentimental love and their libertinism falters. Cuisin’s protagonist “Falselace”, however, shows no such weakness. He joins forces with the “Marquise de la Dolérie” in an attempt to lead libertinism to triumph. Can these libertines change the situational logic established by the novel in the eighteenth century?

The novel develops an intriguingly metafictional mash-up. “Falselace”, introduced as the bastard child of Lovelace, reveals that he has read Richardson’s novel and that he styles his own identity after this literary forebear. His status as the illegitimate offspring Richardson’s protagonist shifts between the literal and the figurative; Lovelace both does and does not exist in the letters of “Falselace”. Since “Falselace” has read the novels by Richardson and Laclos, he knows what fate awaits the libertine and sets out to profit from this literary knowledge in his own intrigues. His “ardent calling is to be the real and non-imaginary hero of Richardson, to acquire his celebrity and to usurp in one way or another his literary immortality” (II, 115; my translation).

“Falselace” survives the duel that is the consequence of his libertine exploits. Yet he cannot escape the situational logic of the eighteenth-century novel with its structures of poetic justice that have been integrated into the novel from the dramatic theory of neoclassical criticism. Richardson’s novels Pamela (1740) and Clarissa experimented with the basic principles of poetic justice in a number of ways, and it seems that Cuisin’s novel makes a new attempt in negotiating the role which this principle should play in the novel by giving his protagonist the knowledge to (potentially) defeat it.

In the end, as Cuisin’s choice of subtitle with Les Moeurs Vengées (“Morality Vindicated”) already gives away, the efforts of “Falselace” are doomed to fail. Tom Keymer suggests that it might be the shadow of the French Revolution that falls on “Falselace’s” aristocratic project here (2004, 213). Cuisin’s mash-up of two key eighteenth-century texts certainly underlines the degree to which poetic justice has been inscribed in the novel, and its reflection on this principle might be considered to point forward to later developments in the novel, as we find them for example in Stendhal’s Le Rouge et le Noir (1830).

Karin Kukkonen is Associate Professor in Comparative Literature at the University of Oslo. She is a specialist in cognitive approaches to literature and narratology. She has published on comics and graphic novels (Contemporary Comics Storytelling, 2013), embodied and probabilistic cognitive approaches to literary narrative, as well as on the eighteenth-century novel. From 2010-2013, she was a Balzan Postdoctoral Research Fellow at St John's College, University of Oxford.