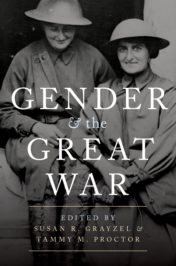 Gender and the Great War

Wonder Woman takes place in an alternative universe, yet the new film of the same name is set in a recognizable historical context: the First World War. For historians, this provides a chance to compare myth to reality. Putting aside the obvious and deliberate alterations—Erich von Ludendorff’s depiction in the story—the film touches on several of the themes that scholars still debate today regarding war and gender.

Diana Prince’s mission to defeat war shores up the myths that dominate the history of the First World War, both its claim to be in the words of sci-fi writer H.G. Wells, “the war to end all wars” and the most terrible and destructive war that the world had ever seen. Steve Trevor is portrayed as the honorable American doughboy with high-minded principles who is, of course, an aviator. The “Knights of the Air” continue to be a fascinating trope in popular narratives and films about the war, offering a new form of the military masculine ideal.

The film also replicates some myths about women. While we see passing images of women as nurses or munition workers in the train station, we mostly see women as victims, part of the hybrid “womenandchildren” as feminist scholar Cynthia Enloe characterizes it. They stand in for the “innocent” lives that the new weapons of war destroy. Certainly scenes of refugees fleeing the violence of the fronts in Belgium reflect the reality of war’s devastation, but only Wonder Woman seems to have a job to do in this war; none of the other myriad roles for women in work and voluntary sectors is truly depicted. In addition, the film acts as if the only place women and children were threatened was in Europe, ignoring both the consequences of this war for women of color in Africa, Asia and the Americas, and their participation.

The story of the war here also shares much with Allied propaganda of the time, including its dark portrayal of German women. The only woman who matters on the German side is Dr. Poison, a mad female chemist who takes delight in concocting ever more lethal gases. Dr. Poison is reminiscent of the real German World War I female spymaster, known in propaganda as the Fraulein Doktor, who features in films of the 1930s and a 1969 Dino de Laurentis film. The Fraulein Doktor seems sure to have inspired the broad outline for Dr. Poison.

In her attitude of unthinking cruelty, Dr. Poison also mirrors the German nurse of an infamous WWI poster: “Red Cross or Iron Cross,” which depicts a German nurse pouring a glass of water on the ground rather than give it to the injured English soldier who cries out in pain and thirst. The poster exhorts the woman of England to take action by claiming that no one from their nation would ever act so maliciously.

Dr. Poison also wears a replica of the tin masks designed and painted to disguise the appalling facial injuries suffered by male combatants. That such masks were created by American women artists such Anna Coleman Ladd as part of a vast network of women motivated to relieve the sufferings of war seems ironic. See actual footage of her studio.

One of the more intriguing aspects of the story is its focus on chemical warfare. In contrast to the film, the chemical weapons of the First World War were invented by men, but chemical shells (like the gas masks designed to protect against them) were produced in factories staffed by women. It’s worth noting that the most famous women chemists of the First World War era were those like Dr. Getrud Woker, who made it their mission in the aftermath of the war to try to halt chemical weapons as well as air power. After the war, Woker and her fellow scientist Dr. Naima Sahlbom, formed what became the “International Committee Against Scientific Warfare,” committed to trying to eradicate this weapon of mass destruction. They confronted politicians and scientists in a war of words and petitions.

Another interesting parallel between Wonder Woman and the women of World War I is that female soldiers participated in combat, notably the Women’s Battalion of Death in 1917 Russia under the Provisional Government. One of the big differences, however, is that these women deliberately rejected the glamour of Gal Gadot; they shaved their heads and desexualized their appearance in order to be treated seriously as soldiers.

To wear a revealing outfit and have your hair down such as Wonder Woman does risked being treated as sexually available, increasing the danger of harassment and rape. These very real threats to women in war are merely hinted at in a scene in the movie when Trevor intervenes in a short exchange between Diana and a group of soldiers. Diana’s power and lack of fear of men in the film suggests the alternative universe of the comic, not the reality of life for women in conflict zones.

The film’s Diana Prince is an interesting exemplar of the tensions not only of the war but of femininity under fire in many eras. Despite all of her kickassness, Wonder Woman can be distracted by a baby or motivated solely by a mother and child in distress. Her raison d’être is both the need to destroy war and to defend the innocent.

Her reaction to war thus in a way mirrors most closely not those of the actual women close to the frontlines, but that of the feisty minority of women—many formerly active in the women’s suffrage campaign—who protested against the war and argued as mothers of soldier sons and as future victims of future wars.

Wonder Woman and Woodrow Wilson both discovered the difficulties of fighting war to end war. We hope the crowds flocking to the film may be inspired by it to explore the ways in which men and women both actively engaged in the war and sought to secure peace and the amelioration of suffering.

Susan R. Grayzel is currently a Professor of History at the University of Mississippi. Along with the recent Gender and the Great War (2017) with Prof. Proctor, she is the author of several books addressing gender, culture and the First World War, including Women and the First World (2002) and Women’s Identities at War: Gender, Motherhood and Politics in Britain and France during the First World War (1999).

Tammy M. Proctor is Department Head and Professor of History at Utah State University. Along with Prof. Grayzel, she has just published Gender and the Great War (2017) with Oxford University Press. She is also the co-author of An English Governess in the Great War: The Secret Brussels Diary of Mary Thorp (Oxford, 2017). Find Prof. Proctor at http://www.tammymproctor.com/ or on twitter at @usuhistorienne.