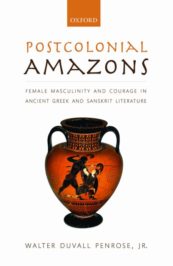 This summer’s epic blockbuster, Wonder Woman, is a feast of visual delights, epic battles, and Amazons. The young Diana, “Wonder Woman,” is, we quickly learn, no ordinary Amazon. In fact, though she is raised by the Amazon queen Hippolyta and trained to be a formidable warrior by her aunt Antiope, both of whom are regularly featured Amazons in Greek myth, she turns out to be not an Amazon at all but a god, whom Zeus has given to the Amazons to raise. (In true 21st century feminist fashion, she is called a god instead of a goddess.) As Diana is a god, her superhero feats are not surprising, but even the rank and file Amazons of Wonder Woman’s Themiscyra live up to their ancient reputation of being ‘faster, smarter, and better than men.’ In the scene that is most reminiscent of Greek legend, an Amazonomachy, or battle between Amazons and men, the Amazons soar off of the cliffs of their island to defeat their enemies. With a combination of spears, swords, bows, arrows, and magical ropes, they defeat the Germans, whose World War I era technology is no match for the Amazons’ panoply. The thrill of victory is short-lived, however, as Antiope, the greatest warrior of the Amazons, is slain by a German bullet in the last scene of the Amazonomachy.

Unlike Diana, the Amazons are mortals, as Antiope’s death painfully illustrates. In ancient Greek lore, Amazons fought like other mortals, even though they were called the “daughters of Ares,” the god of war. This epithet is probably metaphorical, telling us of the bellicose nature of the Amazons. The Amazons of ancient Greek lore seemingly existed to make war, whereas their counterparts in Wonder Woman, though they train for warfare daily, have been put on earth by Zeus for a different purpose: to bring peace by defending all that is good in the world. In fact, rather than being the “daughters of Ares,” they are his sworn enemies. Perhaps this twist should not come as a surprise; war was a way of life for the ancient Greeks, but in the twentieth and twenty-first centuries, the potential for mass destruction should make a pacifist of us all.

Given the mission of her Amazon tribe, it is not surprising that when Diana leaves her Amazon homeland to enter the world of men that she and her multicultural posse carry out a postmodern agenda of ending war and squelching oppression, even though Diana and her new male comrades have differing ideas about how to carry out such tasks. Postmodernism quickly turns to postcolonialism as we meet one of Diana’s new comrades-in-arms, a Native American generically called “Chief,” who tells Diana of the woes his people have suffered at the hands of Europeans. Diana is moved by his story as to why he has left his homeland, and the epic takes on global proportions.

Indeed, the film moves quickly from the local to the global: from the all-woman paradise of Themiscyra to the male-dominated, oppressive battlefields of World War I. But the best is not saved for last. As the film begins to unfold, Themiscyra, the fabled city of the Amazons, stuns the viewer with its breathtaking beauty. Themiscyra is depicted as the chief settlement of “Paradise Island,” replete with lush landscapes, waterfalls, and battle-training for women only. Such an Amazon island was mentioned in Apollonius’ Argonautica as a place, somewhere in the Black Sea, where the Amazons went to worship none other than the god Ares at a sacred black rock (though it was never the site of Themiscyra, which lay in the heartland of Amazon country on the river Thermodon in modern Turkey).

Though the film certainly starts in a “queer” locale — that of Amazon women who shun men, it drifts quickly into heteronormativity as Diana falls in love with Steve Trevor. In this sense it is a modern version of the tale of Antiope, the ancient Amazon who falls in love with the beguiling Greek Theseus, but with a very different ending. Whereas Antiope marries Theseus and bears his child, Diana ultimately remains single to fight for justice. If patriarchy prevails in the Greek myth, in Wonder Woman it takes a not-so-subtle blow. For instance, Diana tells Steve that she has read all twelve volumes of Clio’s treatise on eroticism, which dictate in true Amazon fashion that men are vital for reproduction but unnecessary for bodily pleasures. Of course, the ideas expressed in these alleged tomes echo the legends of the Amazons, who, in Greek lore, only used men to procreate once a year, or, if they did find them a bit more necessary on a day-to-day basis, kept them as domestic slaves. And while Clio was the Ancient Greek muse of history, not eros, ancient Greek sex manuals did once exist. A manual attributed to a woman author named Philaenis may have discussed women pleasuring other women, as may have other such volumes, all now lost to us. In any event, such knowledge does not prevent Diana from falling for Steve Trevor, even though circumstances, in the end, keep them apart.

Wonder Woman takes a feminist turn whenever possible, rethinking stereotypical male and female gender roles. Although Diana doesn’t quite become the de facto leader of the otherwise male cadre she joins to fight the Germans, she is accepted on her own terms as a warrior. Having left Paradise Island naively hoping just not to combat evil but to end it altogether, Diana learns all too quickly that the purpose of her Amazons, to bring peace to earth, is futile: although she and her new male friends manage to bring an end to World War I, ultimately Diana learns that free will reigns supreme. The young Diana’s assertion that only love can save the world keeps her fighting for justice nevertheless. As a prequel to the once-popular TV series, the movie does not fail to deliver when it comes to women in action, and, even if the ending is not as uplifting as one might hope, flying, fighting Amazons do make for great fun. Like the Amazons of Greek lore, Diana’s Amazons demonstrate that women can be formidable foes. While Wonder Woman may be fanciful in its representations of the Amazons, the questions that it raises are real, like those raised by authors of old. Can and should women be trained for combat? The ancient Roman author Musonius asserted, long ago, that the Amazons were proof that women could be trained to make war, and, perhaps most importantly, to defend themselves. While Diana is no ordinary Amazon, she is an Amazon at heart, and the message that she delivers is powerful: women can fight back.

Walter Duvall Penrose, Jr. is an Associate Professor of History at San Diego State University. He is the author of Postcolonial Amazons: Female Masculinity and Courage in Ancient Greek and Sanskrit Literature.