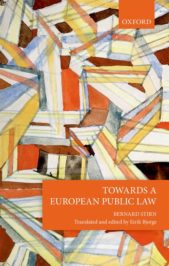 Towards a European Public Law

Since the end of the Second World War, the European project has met with difficulties and even crises. Its momentum has, however, been strong enough to fend off these turbulent undercurrents, and it has developed incrementally in the decades since. Supported by its two pillars, The Council of Europe and the European Union, it is a Europe built on law, and the project is progressively taking on the contours of a new legal system.

The Council of Europe was founded in 1949, and within its framework the European Convention for the protection of human rights and fundamental liberties was adopted in 1950. Focused on the rule of law and the safeguarding of liberties, it developed over time to cover all of wider Europe, including Russia and Turkey, bringing together forty-seven states and 820 million citizens.

The European Union was created on the basis of the initial treaties, which created the first three communities—the European Coal and Steel Community, the European Economic Community, and the European Atomic Energy Community. The Single Act (1986) and the Treaties of Maastricht (1992), of Amsterdam (1997), of Nice (2001) and of Lisbon (2007) gave it its current shape. The Treaty of Lisbon incorporates the Charter of Fundamental Rights, adopted in 2000. From its initial six members, the Union has enlarged to twenty-eight present members, though the prospect of Brexit will reduce this number to twenty-seven.

Within the framework of the European Union, the treaties making up the primary law envisaged a body of secondary law, principally made up of regulations and directives; these have become an important source of law for the Member States and, in a growing number of fields, also for individuals. More and more, these different legal texts, together with the European Convention, are applied both by the Court of Justice of the European Union (which includes both the Court and the General Court) and the European Court of Human Rights at Strasbourg. In close touch with domestic jurisdictions, these courts are developing a European law in their jurisprudence. A common hierarchy of norms is developing, which combines the supremacy of constitutional norms of each State with the superiority of European law over domestic law. Shared guiding principles—non-discrimination, proportionality, subsidiarity, and legal security—are taking root. At the same time, a common understanding of the principle of fair trial before an independent and impartial tribunal is crystallizing.

Within this construction, domestic law plays its full role and European law synthetizes the principles of its different systems. The reciprocal interaction goes between constitutional courts and domestic supreme courts, on the one hand, and the European institutions and courts on the other. Increasingly, comparative law is for each State a source of inspiration. A cross-fertilization of systems is taking place as a consequence, on the basis of the domestic laws, EU law, and the law of the Convention. In this way a European public law is born from mutual influences acting in concert. Borrowing both from common law and from civil law, it is emerging as an original model that is taking up its rightful place amongst the great legal systems.

For those States that are members of the Council of Europe, the European Convention of Human Rights is a powerful mechanism for the collective protection of fundamental rights. Even in those countries that have for a long time offered legal protection for human rights, the Convention, dynamically applied by the Strasbourg Court, exercises an influence on the law, contributes to the evolution of case-law, and casts a light on blind spots. Within the European Union, the solidarity and convergence are even stronger. The nature of the law of the European Union gives it a particular force and authority.

Beyond Brexit, the countries of Europe find themselves, by reason of their law and their courts, on the move towards a central system of European law. The manner in which domestic administration is conducted, too, is evolving in the direction of a shared model. What this will mean for the world at large remains to be seen, but its consequences are sure to have global reach.

Professor Bernard Stirn is President of the Judicial Section of the French Conseil d’Etat and Associate Professor at Sciences Po, and is the author of Towards a European Public Law, which was written on the basis of his experiences as a judge engaged in dialogue with judges in Europe and as a teacher of domestic and European public law. Dr Eirik Bjorge, a Senior Lecturer in Law at Bristol University, edited and translated the book into English.