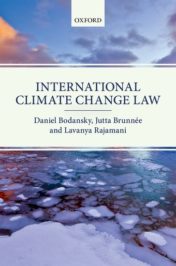 It is now beyond doubt that climate change is real. It is already happening, and human beings are largely responsible for it. The pending break of a massive iceberg from Antarctica’s Larsen C ice shelf is the latest reminder of this reality, and its potentially dire consequences. As if to drive home the urgency of the climate challenge, the cracking of Larsen C accelerated just as President Trump announced his decision to withdraw the US from the Paris Agreement.

Although the Trump Administration had been threatening for months to fulfil the president’s campaign promise to ‘cancel’ the Paris Agreement, and had already begun to dismantle Obama-era domestic climate regulations, the announcement came as a shock to the world.

In December 2015, after more than twenty years of effort under the umbrella of the UN Framework Convention on Climate Change (FCCC), states finally had come together in a comprehensive, universally applicable, long-term agreement on climate change. Then UN Secretary General Ban Ki-moon heralded the Paris Agreement as a ‘monumental triumph,’ while others hailed it as a ‘landmark,’ and the ‘world’s greatest diplomatic success.’ One hundred and ninety-five parties signed the agreement in short order, and, remarkably, it entered into force in less than a year, in November 2016 – just before the US election.

Some of the most innovative features of the Paris Agreement, notably its reliance on non-binding, ‘nationally determined contributions’ (NDCs) to limit greenhouse gas emissions rather than on internationally negotiated, legally binding targets, were in part designed to facilitate its acceptance by then US President Barack Obama without Senate approval. Other aspects of the agreement were meant to make it easier for a less sympathetic, new government to stay in the Paris Agreement. In any event, notwithstanding the announcement of US withdrawal, it will not take effect until November 2020. In the meantime, the US remains fully bound by the Paris Agreement, and obliged to perform its commitments in good faith.

In some respects, the world has been at a similar juncture before, in 2001, when George W. Bush assumed the US presidency and announced the US would not join the 1997 Kyoto Protocol. And yet, the most recent developments regarding the Paris Agreement underscore how much have changed in the intervening years.

The UN climate regime has evolved significantly, from the ‘top-down,’ largely inter-state approach epitomized by the Kyoto Protocol, to the hybrid, multi-level governance experiment with a blend of binding and non-binding elements, among which the ‘bottom-up’ NDCs are a central innovation.

This shift in the legal approach to climate change has gone hand in hand with a major shift in global climate politics. The Paris Agreement is historic because it managed to provide a formula that transcends long-standing divisions between developed and developing nations, that provides flexibility and privileges sovereign autonomy while promoting accountability and progressively increased ambition, and that establishes the long-term horizon needed to spur social, economic, and technological transition.

Finally, there have been significant geopolitical shifts. Rather than threaten the Paris Agreement, the US withdrawal appears to have strengthened global resolve to follow through with climate action. China, long a reluctant participant in the climate regime due to its developmental aspirations, has declared its willingness to provide climate leadership. The European Union and even Canada, the immediate US neighbour and long a ‘follower’ of its climate policies, have made clear that they are unwilling to renegotiate the Paris Agreement as desired by the Trump administration. Indeed, just this week the Environment Ministers of Canada, France, Germany, Italy, Japan, and the United Kingdom, and the European Commissioners responsible for environment and climate agreed that the Paris agreement is irreversible and its full integrity is key. Meanwhile, climate action continues apace in the US as well, as states, cities, and corporations pledge continued support of the Paris Agreement.

So, all indications are that the Paris Agreement adopted the right approach to the infinitely complex policy challenge posed by climate change. And the strengthened multilateralism we have witnessed since the US announced its decision to withdraw offers hope that the climate agenda will continue to advance, and the strong action by US states, cities, and businesses will build a bridge for the US to re-engage with the Paris Agreement in the future.

Featured image credit: “The U.S. Chief of Mission Residence in Paris, France, Is Illuminated in Green to Celebrate Paris Agreement’s Entry into Force” by The U.S. Department of State. CC0 Public Domain via Wikimedia Commons.

Daniel Bodansky is a Foundation Professor at the Sandra Day O'Conner College of Law and Senior Sustainability Scholar at the Julie Ann Wrigley Global Institute of Sustainability at Arizona State University. Bodansky is an expert on international environmental law. He has worked extensively on the international climate change negotiations, including as a senior negotiator in the US Department of State and as a consultant to the UN climate change secretariat and the Center for Climate and Energy Solutions.

Jutta Brunnée is a Professor of Law and Metcalf Chair in Environmental Law at the Faculty of Law, University of Toronto. Writing in the areas of public international law and international environmental law, she is co-author of Legitimacy and Legality in International Law: An Interactional Account, which was awarded the American Society of International Laws 2011 Certificate of Merit for preeminent contribution to creative scholarship.

Lavanya Rajamani is Professor at the Centre for Policy Research, New Delhi. She was previously at Queens College, Cambridge, where she was a University Lecturer in Environmental Law, and Fellow and Director of Studies in Law, and at Worcester College, Oxford, where she was a Junior Research Fellow in Public International Law.