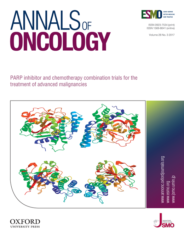 Annals of Oncology, the journal of the European Society for Medical Oncology and the Japanese Society of Medical Oncology, provides rapid and efficient peer-review publications on innovative cancer treatments or translational work related to oncology and precision medicine.

An academic study performed in Paris suggests that gut microbiota is associated with efficacy and intestinal toxicity of the drug, ipilimumab. Monoclonal antibodies directed against checkpoint molecules such as CTLA-4 have recently demonstrated success in cancer immunotherapy in patients with melanoma. CTLA-4 (cytotoxic T-lymphocyte-associated protein 4) is a T cell receptor that functions as an immune checkpoint, downregulating immune responses. The monoclonal antibody, ipilimumab, blocks CTLA-4 by inhibiting this negative immune signal and amplifying immune responses. Ipilimumab has demonstrated its efficacy in patients with metastatic melanoma where administration prolongs survival in a subset of patients. However, because of its non-specific and broad immune activation, ipilimumab can also induce immune-related adverse events, including potentially severe enterocolitis.

Due to the rising uses of ipilimumab in immunotherapy against melanoma, we sought to understand how differences in the composition of gut microbiota influenced drug response. Under what circumstance would ipilimumab lead to a successful anti-cancer response? Which gut microbiota composition will predispose to enterocolitis? To understand the possibility of each outcome, we prospectively studied 26 patients with metastatic melanoma treated with ipilimumab.

We found that a distinct baseline gut microbiota composition was associated with both clinical response and colitis. Patients whose gut microbiota was enriched in Faecalibacterium and Firmicutes (including Faecalibacterium prausnitzii, Gemmiger formicilis, and other butyrate-producing bacteria) referred to as cluster A, experienced a stronger T cell stimulation and thus better responded to ipilimumab and were also more prone to enterocolitis than patients whose gut microbiota was enriched in Bacteroides (cluster B). Despite the greater risk of enterocolitis, the baseline gut microbiota composition of Cluster A may be of greater clinical benefit.

These results obtained in patients show a link between gut microbiota, efficacy of immune checkpoint inhibitors, and intestinal inflammation. They pave the way for a better identification of responders to this class of drugs. These results suggest that we could alter gut microbiota prior to immunotherapy, using probiotics, prebiotics, phages, antibiotics, peptides, and fecal transplantation in order to improve response to anti-cancer immunotherapy. Needless to say, many steps have to be passed before we get to this stage. These results should be confirmed in larger populations of patients and extended to other immune checkpoint inhibitors. Bacteria should be more precisely characterized, the relative weight of gut microbiota composition should be compared to other biomarkers and ultimately, clinical trials should prove the utility of tailored manipulation of gut microbiota.

Dr Franck Carbonnel is the head of the department of Gastroenterology at Bicêtre Hospital (Assistance Publique-Hôpitaux de Paris). He is affiliated to the INSERM UMR 1018.

Dr Caroline Robert is the head of the department of Dermatology at Gustave Roussy anti-cancer center and co-directs the Melanoma Team in INSERM UMR 981.

Both are coauthors of "Baseline gut microbiota predicts clinical response and colitis in metastatic melanoma patients treated with ipilimumab", recently published in Annals of Oncology.