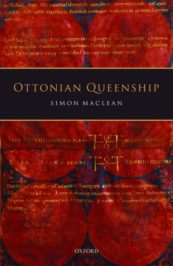 In 2008, archaeologists working on the cathedral at Magdeburg, in eastern Germany, opened an ancient tomb and rediscovered the bones of an Anglo-Saxon princess called Edith. She had died in the year 946, aged only about 30. Her remains were brought across the North Sea for scientific tests which verified the identification via tests on her tooth enamel, indicating that the bones belonged to someone who had grown up drinking water from the chalky landscapes of southern Britain. This Edith was none other than the granddaughter of Alfred the Great (871–99), the king of Wessex who had defeated the Vikings and laid the foundations for his successors to create by conquest the first kingdom of the English. The find was therefore celebrated in the British media as a window onto this legendary moment of English state formation.

It’s understandable that the British press should focus on the local angle: after all, the skeleton represents the oldest complete set of remains from any English royal family. But Edith was not only an Anglo-Saxon princess. She was also an Ottonian queen. The Ottonians were one of the great dynasties of medieval European history, and are traditionally regarded as the founders of Germany. They began as mere dukes of Saxony (of which Magdeburg was the key ecclesiastical centre), but in 919 acquired the kingship and gradually became the most powerful and successful of all the royal dynasties who ruled Europe in the tenth century. Five members of the family ruled East Francia—the common contemporary name for the territory now called Germany—between 919 and 1024. They added the northern half of Italy, and acquired the imperial title, in the 960s. On top of that, they intermittently wielded informal influence in West Francia (proto-France), and in parts of eastern and northern Europe. The names of these five kings are mercifully easy to remember (a Henry, three Ottos, then another Henry) and their deeds are well documented. But what makes the Ottonian family really stand out is the remarkable power of their wives and daughters.

There were six Ottonian queens, and they rank among the most famous and powerful female rulers of the entire Middle Ages. With her marriage to Otto I in 936, Edith became the second of the queens. Unfortunately, she is the one about whom we know the least, though contemporary sources do celebrate the depth of her English royal heritage and the prestige that it brought to her husband’s nouveau-royal family. Edith’s mother-in-law Mathilda was the matriarch of the family, ruling as queen from 919 and outliving her husband Henry I by three decades. She founded several important monasteries (which also acted as political centres) and shortly after her death in 968 was the subject of two biographies. These were the first biographies of a contemporary queen for around three centuries.

The third and sixth Ottonian queens were Gerberga (d. 969), a sister of Otto I who was married first to a duke of Lotharingia and then to one of the kings of West Francia, and Cunigunde (d. 1040), the wife of Henry II. Both these queens are very prominent in contemporary sources, controlling succession, defending cities, and manipulating the levers of politics.

But the real stars of the dynasty were the empresses Theophanu and Adelheid. Theophanu was a Byzantine princess who at the age of 12 in 972 married Otto II and became in effect the ruler of the Ottonian empire in place of her infant son between her husband’s death in 983 and her own in 991. So extraordinary was her status that we have a document from 990 dated to the years of her reign as “Theophanius imperator”: “Theophanu the [male] emperor”. Her mother-in-law Adelheid was not only Otto I’s second wife but also a daughter, sister, mother, and widow of kings. She presided over three generations of Ottonian power in East Francia and Italy before her death in 999. The lives of these two women were transformed into legends in the centuries after their deaths, thanks to the mythologizing efforts of a plethora of artists, novelists, and composers (including Handel). The power of these six queens was not just a matter of their ability to influence their powerful husbands. They were rulers: that is how they saw themselves, and that is how contemporaries respectfully and fearfully described them. Little wonder that Pauline Stafford, a pioneering historian of early medieval queenship, argued that the European tenth century was “a century of women”.

But what was it about the tenth century that enabled Ottonian queens to wield such enormous power? This question has no settled answer. Formidable personalities are often given as the reason, but we do not have the kinds of sources give reliable personal information, so this is not much more than a guess. Another explanation has been sought in attitudes to gender in the Ottonian homeland of Saxony, where female monasticism was very prominent. A third common argument is that tenth-century queens inherited a strongly institutionalised version of queenship from the Carolingian Empire which had spanned Western Europe during the ninth century and established many of the political categories which would define the region’s politics until the end of the Middle Ages and beyond.

While there is something in all of these perspectives, my own argument is that powerful Ottonian queenship was a product of the peculiar conditions of tenth-century politics. This was an era in which the old certainties of the Carolingian era were breaking down, and in which territories once ruled by members of the same family were now ruled by unrelated dynasties who had to fight to convince others to regard them as royal. In this competitive dynastic environment they married already-royal women who could bring them prestige—and they activated that prestige by insisting on the high status of the queen. Elevating queenship into a central category of political action was a strategy that helped kings to dominate their rivals and their own families in a period where the established patterns of Carolingian politics had broken down. But it was a category that was ultimately inhabited, manipulated and lived by the queens themselves. This is how, in the fluid and uncertain world of tenth-century Europe, outsiders like Theophanu, Adelheid, and Edith became rulers of kingdoms and empires.

Simon MacLean is a professor in History at the University of St Andrews. He is the author of Ottonian Queenship.