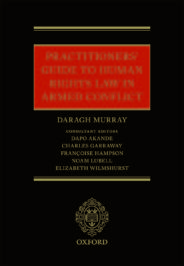 The twenty-ninth of May marks the ‘International Day of UN Peacekeepers’. Today, there are approximately 100,000 UN peacekeepers deployed across the globe, and these individuals’ contribution to the restoration and maintenance of international peace and security – often undertaken in exceptionally difficult circumstances – must be acknowledged. However, recent sexual abuse and exploitation scandals involving UN peacekeepers (see, these three examples), and the less than exemplary response of the UN itself, have tarnished the reputation of the UN and individual peacekeeping forces, undermining their legitimacy and that of their mandate.

Moving forward, it is suggested that the UN should actively engage with international human rights law. This body of law provides an effective overall framework, capable of guiding the activities of UN Peace Support Operations (PSOs), and ensuring that these forces demonstrate international best practice. This blog will discuss why PSOs should think about human rights law, before briefly highlighting the role that human rights law could play with respect to detention operations and investigations.

Why UN PSOs should think about human rights law:

From an international legal perspective, it is widely accepted that UN PSOs are subject to obligations under human rights law. This applies to the PSO itself, as a subsidiary organ of the United Nations (see WHO and Egypt, para 37), and to individual Troop Contributing Countries (TCCs), who carry their States’ international obligations with them on deployment. To-date, however, there has been a discernible hesitancy to actively engage with human rights law. This must change.

For those TCCs who have recognised a right of individual petition before human rights bodies, such as States Parties to the European Convention on Human Rights, or States that have made the necessary declaration in accordance with Article 34 of the Protocol to the African Charter on Human and Peoples’ Rights, human rights compliance is a very real requirement. This is a result of both the extraterritorial application of human rights law, and the fact that TCCs – and not just the UN – may be responsible for the actions of PSO forces (See, Jaloud paras. 149-51, Al-Jedda paras. 84-5, compare with Behrami and Behrami, para. 151).

For other States, it must be acknowledged that the possibility of real human rights scrutiny is remote. However, for a PSO force to function effectively all national contingents must work together. This means that all contributing States, and the Force Commander, must be aware of individual States’ human rights obligations, as this will affect the management of the mission. The issue is therefore one of interoperability. Just as military coalitions such as NATO must be aware of contributing State’s legal obligations, so that tasks can be allocated and operations planned to ensure legal compliance, so too must PSO forces be aware of TCCs’ human rights obligations.

Perhaps most importantly, however, and moving beyond strict legal and practical considerations, the UN’s role as an agent of the international community must be acknowledged. While the UN is not a human rights organisation per se, the UN is undeniably associated with the protection and promotion of human rights. If the UN is to maintain its credibility, impartiality, and legitimacy – elements essential to the fulfillment of PSO mandates – it must not only act in a human rights compliant manner, but it must also be seen to act in such in a manner. It is difficult, if not impossible, for PSOs to develop links with affected populations, or to convince actors to end human rights violations, while being themselves accused of violating human rights.

If the UN is to engage with human rights law, it must begin to more effectively incorporate human rights compliance into its mission planning and standard operating procedures. Human rights law will affect numerous components of a PSO’s activities, from the fulfilment of a protection of civilians mandate, to the use of force, or the planning of individual operations. For the purposes of this post, however, I will briefly focus on the detention and investigations. Detention is an issue that the UN has yet to consider from a human rights perspective, while engagement with human rights in the context of investigations could be of real practical assistance to the UN.

It is inevitable that PSOs will be required to conduct some form of detention during operations. Detention is a central element of any response to internal disturbances or tensions, and is also essential for security reasons during hostilities. Indeed, if a UN force engages in hostilities, but does not conduct detention operations, serious questions relating to the protection of the right to life should be asked.

However, PSOs do not appear to have undertaken and implemented effective detention planning in order to ensure compliance with the requirements of international human rights law. For example, a core element of human rights law is the prohibition of arbitrary detention. To protect against arbitrariness an explicit legal basis for detention must be established. Satisfying this obligation is relatively straightforward, but to-date the UN Security Council Resolutions establishing PSOs have not addressed detention authority, and this is not a feature of the UN Model Status of Forces Agreement. It is therefore likely that any detention operation conducted by PSO forces will be arbitrary, and in violation of the right to liberty and security.

International human rights law also establishes explicit safeguards relating to the transfer of detainees from UN custody to the authorities of the host State. Human rights law expressly prohibits such transfer if there is a real risk of torture, or cruel, inhuman or degrading treatment or punishment. Given the context in which PSOs inevitably operate, the possibility that detainees cannot be legally transferred to the host State must be considered, and the resultant implications for the PSO force thought through and planned for.

Recent sexual abuse scandals, and the UN’s inadequate response, have underscored the need for an effective investigative system. As the UN comes to terms with how it should move forward in this regard, international human rights law can be of real, practical assistance. For instance, human rights law details the steps necessary to the conduct of an effective investigation – including in difficult security environments (see Al-Skeini, paras. 161-67) – while associated requirements relating to public scrutiny can facilitate transparency vis-à-vis the affected community, thereby ensuring that justice is seen to be done, and helping to restore the UN’s legitimacy.

The UN and individual TCCs must begin to effectively engage with human rights, and to ensure that human rights requirements are fully incorporated into all stages of PSO design, generation and deployment. This is, of course, important both as a legal obligation for TCCs and as demonstrative of the UN’s commitment to human rights. Equally important, however, is the possibility that human rights law can be used to guide PSO activity, by providing an overall frame of reference, and much needed answers when it comes to addressing issues such as detention or investigations.

Daragh Murray is a lecturer in the School of Law & Human Rights Centre at the University of Essex. His research focuses on the law of armed conflict, international human rights law, and the relationship between the two. He is the author of Practitioners' Guide to Human Rights Law in Armed Conflict.