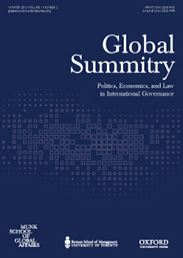 Global Summitry: Politics, Economics, and Law in International Governance is a peer-reviewed print and digital journal publication that features articles on the organization and execution of global politics and policy from academic and policy experts, as well as distinguished former officials and professionals in the field.

Across the twentieth century, and particularly after World War II, the United States pursued a foreign policy that played a central role in the creation of an international order based on rules, the consent of the governed, and capitalist economic expansion. While certainly not encompassing all the states of the global international system, this liberal international order has been immensely successful in advancing peace, prosperity, and freedom, to the great benefit of much of humankind.

From President Bill Clinton, through several recent presidents and numerous US foreign policy makers, the United States stood out in the international order as the ‘indispensable nation’, but Donald Trump has brought that to a screeching halt with his ‘America First’ rhetoric. Today, America’s foreign policy appears to be built on highly nationalist, even populist prescriptions. So, the global leader, indeed the primary mover of the Liberal Order, the United States has become potentially the destroyer of the Order it built.

The open question therefore in these early days of the Age of Trump is whether the Liberal Order is just being challenged but likely fixable and sustainable, or is it about to ‘topple over’? And if it does crumble, what replaces the Liberal Order? Tom Wright examining the Trump Administration in its earliest foreign policy efforts concludes: “The bottom line is that the president is an ideological radical who would like to revolutionize US foreign policy but he is largely alone in his intention. He faces opposition from almost all quarters.”

Trump foreign policy is difficult to determine. Rhetorically it is often nationalist and certainly aggressive; yet at other times, it is more reassuring and traditional. In still other statements the ‘America First’ approach is very ‘hands off’ and at arms-length, especially to America’s allies. Stewart Patrick of the Council on Foreign Relations recently sketched out a series of alternatives to the current Liberal Order. The approaches he describes range from the potentially collaborative though ad hoc, through a return to highly nationalist spheres of interest approach, or even more isolationist architectures. Indeed, given the President’s ‘America First’ rhetoric, it appears that the only consistent aspect is its nationalist character. A unilateralist and nationalist architecture of some form is likely to emerge. Indeed, Niall Ferguson the recent biographer of Henry Kissinger has suggested in The American Interest that the Trump Administration may well resurrect, the foreign policy behavior of an earlier Republican President, Theodore Roosevelt:


The open question therefore in these early days of the Age of Trump is whether the Liberal Order is just being challenged but likely fixable and sustainable, or is it about to ‘topple over’? And if it does crumble, what replaces the Liberal Order?

It seems clear that, like Theodore Roosevelt, Trump conceives of an international order no longer predicated on Wilsonian notions of collective security, and no longer expensively underwritten by the United States. Instead, like Roosevelt, Trump wants a world run by regional great powers with strong men in command, all of whom understand that any lasting international order must be based on the balance of power. In short, Trump already has more than he knows in common with Roosevelt. … “In a world regulated by power,” Kissinger argued, “Roosevelt believed that the natural order of things was reflected in the concept of ‘spheres of influence,’ which assigned preponderant influence over large regions to specific powers.”

Whether such an approach is congenial for President Trump and his close advisors, or whether it even accurately represents Roosevelt foreign policy, the reality of the global order architecture is apparently going to be quite distinct from the recent past.

Take but one example – the G20. Under the G20 umbrella the largest established and emerging market states meet annually. Leaders continue to gather to address the challenges of the global economy and consensus has been built around free trade, open markets, and the rule of law, all ideas long central to the Liberal Order that the US built. Writing on 13 March in Project Syndicate, the German Finance Minister, Wolfgang Schäuble suggested the key role for the G20:

In my view, the G20 is the best forum for increased and inclusive cooperation. Of course, the G20 is not perfect, but it is the best institution we now have for achieving a form of globalization that works for everyone. Through it, the world’s main industrialized and emerging countries have worked together toward constructing a shared global order that can deliver increasing prosperity. Indeed, the G20 is the political backbone of the global financial architecture that secures open markets, orderly capital flows, and a safety net for countries in difficulty.

And yet very recently, following the first meeting of President Trump and Germany’s Chancellor Angela Merkel and the G20 finance ministers and central bankers in Baden-Baden Germany, the US blocked a simple statement “to resist all forms of protectionism”, which up until this gathering was a standard principle of the G20 and the Liberal Order. The only certainty today: the future of the Liberal Order is very uncertain.

Alan S. Alexandroff is the Director of the Global Summitry Project and Senior Editor of Global Summitry: Politics, Economics and Law in International Governance. Global Summitry has initiated a podcast series, "Shaking the Global Order: American Foreign Policy in the ‘Age of Trump’, to explore what are the likely consequences for the Liberal Order.