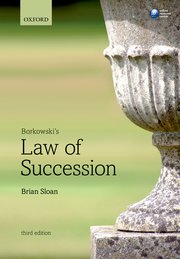 Should a person be free to dispose of property as she wishes on death, or be forced to leave it to certain family members? This is one of the most fundamental questions in succession law. Some (particularly continental European) jurisdictions allocate compulsory portions to certain family members, irrespective of any will. England and Wales, however, has a default testamentary freedom principle combined with the Inheritance (Provision for Family and Dependants) Act 1975, allowing certain people to claim discretionary provision out of the estate in limited circumstances.

In Ilott v The Blue Cross (2017), its first judgment on the 1975 Act, the Supreme Court struck a blow for testamentary freedom and against forced family provision. Melita Jackson died in 2004, leaving a £486,000 estate. Her will divided most of it between the Blue Cross, RSPB, and RSPCA. Mrs Jackson wrote a letter explaining the exclusion of her only daughter, Heather, from her will. Heather had left home in 1978 at the age of 17, without her mother’s knowledge, to live with her future husband. Mrs Jackson disapproved of her daughter’s lifestyle. Heather and her husband had five children and lived in straitened financial circumstances, Heather choosing to stay at home after the first child’s birth. Heather never went on holiday and had many items that were old or second-hand. Despite attempted reconciliations, mother and daughter were estranged for some 26 years, and Heather was aware before Mrs Jackson’s death that she would be excluded from the will.

Heather claimed her mother’s will failed to make ‘reasonable financial provision’ for her maintenance under section 1 of the 1975 Act. The litigation had a long history. In 2007, District Judge Million agreed that the will failed to make such reasonable financial provision. That’s the first stage of the claim, and in the second stage the court must decide what provision the claimant should actually receive out of the estate. At both stages, the court must consider various factors from section 3. Judge Million awarded Heather £50,000.

The Court of Appeal upheld his conclusion on the first stage. Allowing Heather’s second appeal to it seeking greater provision in 2015, the Court of Appeal made two criticisms of Judge Million’s approach. Firstly, he stated that the award should be “limited” because of Heather’s lack of expectation of provision and ability to live within her current means but omitted to explain “what the award might otherwise have been and to what extent it was limited”. Secondly, he failed to verify his award’s effect on Heather’s state benefits.

Because of those errors, the Court of Appeal re-exercised the discretion, concluding that Heather should receive £143,000 to enable her to purchase the housing association property in which she and her family were living, in addition to the reasonable costs of the purchase. Heather was also given an option to claim up to £20,000 as a capital sum from the estate. The Charities appealed that 2015 decision. They had been refused permission to appeal the first stage decision to the Supreme Court in 2011, so Heather was guaranteed to receive something from the estate whatever happened in the Supreme Court.

The Supreme Court allowed the charities’ appeal, reinstating Judge Million’s £50,000 award. Lord Hughes, with whom all six other justices agreed, held that Judge Million had made neither error alleged. In relation to the first, the Act required “a single assessment by the judge of what reasonable financial provision should be made in all the circumstances of the case”. Judge Million was said to be perfectly entitled to take into account the relationship between Mrs Jackson and Heather as he had. The two dominant factors in the case were the estrangement and Heather’s strained circumstances. The Court of Appeal’s order, by contrast, had given “little if any weight” to the length of the estrangement.

The Supreme Court was also concerned that the Court of Appeal had given “little if any weight” to Mrs Jackson’s clear wishes. It was incorrect to say that the charities’ lack of any expectation of benefit because Mrs Jackson hadn’t been involved with them during her life was equal with Heather’s lack of similar expectation. They were the will beneficiaries, and didn’t need to justify their claim via needs as Heather did. The Court of Appeal erred in suggesting that they were not prejudiced by a higher award to Heather. It was also held erroneous to suggest that the court didn’t need to give specific consideration to Mrs Jackson’s wishes because Parliament had limited claims to particular circumstances.

On the second suggested error, the Supreme Court held that Judge Million had addressed the impact on benefits, and that if Heather spent the £50,000 in a particular way that impact would be minimised. The £50,000 award met many of Heather’s needs, allowing her to “buy much needed household goods and have a family holiday”, and should be restored.

Lady Hale (with Lords Wilson and Kerr agreeing) gave a supplementary judgment. She criticised the law for giving no guidance on the factors to be considered in deciding “whether an adult child is deserving or undeserving of reasonable maintenance”, particularly given the range of public views, and expressed “regret” that the Law Commission didn’t consider the underlying principles in 2011.

The result will relieve the charities, who took a financial and reputational risk in bringing the case to the Supreme Court. It’ll also be welcomed by private client practitioners generally wanting to assure clients that wills will be implemented.

But the Supreme Court’s decision may be challengeable in some respects. Since courts are often reluctant to consider conduct regarding familial relationships, the acceptance that Heather’s claim should be quite so limited with reference to the relationship between mother and daughter might be surprising. That said, I’ve advocated recognition of positive caring contributions and conduct where relevant, so it’s difficult for me to criticise its reasoning on converse estrangement cases.

The debate over the proper balance between testamentary freedom and provision for family members will continue. The “testamentary freedom” camp seem in a stronger position than before the Supreme Court’s decision. But it should be remembered that Heather still went away with something, even if some similar future claimants may not.