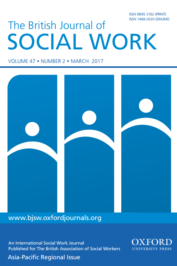 The British Journal of Social Work

The British Journal of Social Work is the leading academic social work journal in the UK. It covers every aspect of social work, with papers reporting research, discussing practice, and examining principles and theories. It is read by social work educators, researchers, practitioners and managers who wish to keep up to date with theoretical and empirical developments in the field.

In the summer of 2014, reports that a ‘septic tank grave’ containing the skeletal remains of ‘800 babies’ was discovered within the grounds of a former home for ‘unmarried mothers’ in Tuam, County Galway, featured prominently as an international news ‘story.’ Interest in the issue was prompted by the tireless and tenacious work of a local amateur historian, Catherine Corless, whose research revealed that, during the 36 years between the Home’s foundation in 1925 and its closure in 1961, 796 children had died.

In June 2014, The Taoiseach (prime minister) Enda Kenny told the Dáil (Irish parliament), that the treatment of many unmarried women and their babies from the 1920s onwards was an ‘abomination.’ A Commission of Investigation was set up with a report due in 2018. Costing an estimated €21 million, it is clearly to be welcomed because issues, including high infant mortality rates in these Homes, warrants forensic analysis.

Connections can be made between the treatment of ‘unmarried mothers’ in the past and women’s lack of reproductive rights in contemporary Ireland. The Protection of Life During Pregnancy Act 2013 permits abortion in Irish hospitals, only under limited circumstances: if medical experts assess that a woman’s life would be endangered were the pregnancy to go full term, or, following instances of rape or incest, if she appears suicidal. As a consequence of the lack of reproductive rights in the Irish Republic, thousands of women still travel to England for abortions.

Turning to the past in 1927, five years after Irish independence, the report of the Commission on the Relief of the Poor identified responses to ‘unmarried mothers.’ It delineated ‘two classes’ of ‘unmarried mothers’: ‘those who may be amenable to reform’, so-called ‘first offenders’, and ‘the less hopeful cases.’ For the latter, a lengthy detention was recommended. For example, in circumstances where an ‘unmarried mother’, pregnant for a third time, applied for relief to a poor law institution, the Board of Health should have the ‘power to detain’ for ‘such a period as they think fit, having considered the recommendation of the Superior or Matron of the Home.’ In contrast, the treatment of those amenable to reform would focus on ‘moral upbringing’ and be characterised by the ‘traits of firmness and discipline, but also charity and sympathy.’ They would be dealt with by special institutions, a prototype of which was founded in 1922 by the Sisters of the Sacred Hearts of Jesus and Mary in Bessborough, Cork.

Being sent to a Mother and Baby Home had substantial disadvantages for women, as these institutions were designed to serve male interests and reinforce the power and social advantages of men. Whilst the secrecy inherent in the arrangement was likely to intensify women’s sense of shame and guilt surrounding the pregnancy, it preserved the anonymity of putative fathers, safeguarding male reputations. Although nuns were in charge of the day-to-day management of the establishments, it was men, particularly those laden with ‘symbolic capital’ such as priests and doctors, who referred women to the Homes and acted as gate-keepers.

Many women refused to go to such Homes because it meant, in effect, two years quasi-imprisonment. Many took ferries to England, hoping to spend a shorter period of time in a Mother and Baby Home and to have their children adopted. This specific type of Irish female migration had, moreover, featured as a recurring, if minor, theme in a number of official reports produced by the Irish government since the formation of the state in the early 1920s. Pre-occupation with the flight of the ‘unmarried mothers’ became especially more marked in the 1950s and 1960s, and this was reflected in the increased number of ‘repatriations’ with such women being sent back to Ireland.

Even in the 1930s, the Irish State was alert to the high mortality rate in the Mother and Baby Homes. The Department of Local Government and Public Health stated that the ‘abnormal death-rate’ amongst ‘illegitimate infants’ was a matter of ‘grave concern.’ There is also also suspicion that some deaths may have been bogus because of the practice of children in the Homes being taken to the United States by ‘adopters’.

Attitudinal changes began occurring in the 1970s. The Social Welfare Act 1973 ushered in the introduction of the Unmarried Mothers Allowance. The Unfair Dismissals Act 1977 ensured that women would not lose their jobs as a result of pregnancy, and in so doing provided some protection against social prejudice. The Status of Children Act, 1987 abolished the concept of illegitimacy and sought to equalise the rights of children including those born outside marriage. Such measures were due, in part, to the pressure applied by the embryonic women’s movement from the late-1960s.

Many women who spent time in these Homes are still alive and some of the allegations which have been made provide reasonable ground to believe that if not acts of torture, then acts of cruel, inhuman, or degrading treatment may have been committed. Similarly, some children born in these establishments are alive today. However, there is a need to remain alert to how an emerging narrative on the Mother and Baby Homes may now be seeking to relegate the issue to Ireland’s troubled past. It is vital, therefore, that social work practitioners and educators make the connection between the treatment accorded to ‘unmarried mothers’ during the twentieth century and women’s lack of reproductive rights today.

Paul Michael Garrett works at NUI Galway. He is the author of the article Excavating the past: Mother and Baby Homes in the Republic of Ireland, published in The British Journal of Social Work. This is freely available for a limited time.