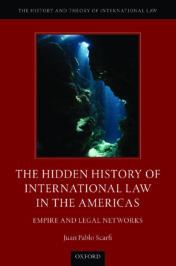 The Hidden History of International Law in the Americas

In the context of recent renovated explorations about the historical connections between imperialism and international law, historians and theorists in the field have become more aware of the limits of international law to transform the structures of international politics and the importance of historicizing and politicizing international law. At the same time, the inclusion of different legal traditions into the values of the international community, including, for instance, the rights of indigenous communities, is a crucial condition for the historical transformation of the international system and the public legitimization of robust principles and practices of international justice. When the inclusive construction of legal pluralism is combined with the practical legitimization of the principles of sovereign equality and multilateral-ism, a skeptical and critical historical sensibility towards international justice could emerge, so the construction of global justice begins to be conceived as not simply a normative ideal, but a subject of historical investigation and a terrain for identifying, denouncing and repairing the wrong by producing empirical critique hand by hand with concrete and practical legal innovation.

Instead, they could potentially perform a reflexive and transformative role by contributing to connect world politics with legal debates, formal procedures with public deliberations, professors with students, elitist institutions with popular concerns, and academia with the world of practitioners. As such, they should play a central role creating and shaping debates in the public sphere beyond the elitist community of international lawyers and diplomacy, in order to strengthen the values of legal pluralism, unravel situations of hegemony, and make of global justice, in the context of a hierarchical international system, a subject of public deliberation, popular interest and critical importance for world politics.

Juan Pablo Scarfi is a Research Associate at the Argentine National Scientific and Technical Research Council (CONICET) and a Lecturer in International Law and International Relations at the School of Politics and Government at the National University of San Martin, Argentina. He is the author of The Hidden History of International Law in the Americas: Empire and Legal Networks.