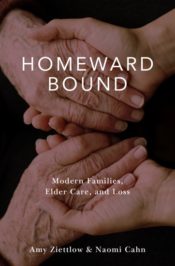 Elder care requires an intergenerational partnership. The duty to care for an aging parent is often grounded in an understanding of reciprocity; the parental hands that once held ours during childhood now require our supportive presence in old age or during an illness.

How does this caregiving expectation of reciprocity apply to the approximately 76 million Baby Boomers in the United States whose aging will dominate the next few decades? The Baby Boomers’ high rates of divorce, remarriage, single parenthood, decreased birthrate, and their geographic mobility signal profound changes in the traditional elder care script. More than 40% of adults in America include a step-relative in their family. Many Baby Boomers now count grown stepchildren as a part of their families that they did not care for, let alone know, during the stepchildren’s childhood. Elder care can no longer be based on a presumption of generational reciprocity. And yet, family caregiving, in contrast to paid professional care, remains the backbone of our society’s approach to caring for its aging elders, especially those with chronic or terminal illness.

To learn more about the experiences of today’s caregivers, we interviewed respondents aged 28 to 49 years old who had played an integral role in caring for their now deceased parent or stepparent. Our sample reflected current Baby Boomer family demographics: one-third of the parents were still married to their first spouse at the time of their death, one-third were single parents (many as a result of divorce), and one-third had separated from their first spouse or partner and remarried since having kids.

Kendra, one of our respondents, is one face of the new normal in family elder care. She was the primary caregiver for her ex-stepfather in his final months. Throughout her life, Kendra has known several stepfathers, but she recalled that she and Jimmy just clicked. They stayed in touch even after he and her mother divorced. They both enjoyed working outside and fixing up the house together. When she was in between jobs, he helped support her financially and connected her to his professional network.

Kendra prided herself on her reliability and loyalty. As her ex-stepfather faced decisions about downsizing and moving to an assisted living center, she helped fix up his house to ready it for sale. She explained that she “was the one who showed up when called.” Her presence created some conflict with her three stepsisters, especially when they decided not to come to the assisted living center the night Jimmy died.

Kendra is one example of today’s family caregiver, and our interviews with other family caregivers, especially in blended families, showed us that resilient family systems tend to share these attributes in relationship to the caregiving and loss experience:


The parental hands that once held ours during childhood now require our supportive presence in old age or during an illness.

Almost half of those interviewed could be considered to have all four elements. More than half of those with all four elements of resiliency came from married parent families because a life-long history of shared norms contributed to the ease of making the care experience understandable, manageable, and meaningful–and a surviving parent who served as the symbol of those norms helped in managing the loss of the other parent. For single parent and remarried parent-led families with all four elements, several factors helped compensate if there was a low level of shared norms:

Kendra brought to the interview a stuffed bear the hospice volunteers had made for her from Jimmy’s shirts. With tears in her eyes she confessed, “I considered him my dad.” She tried to stay connected to her stepsisters in the year since his death, but her attempts were largely one-sided. Hence, she grieved both him and them. As Kendra’s story shows, although caregiving continues, changing family structures change the caregiving–and caring–experience.

A Job I Never Expected