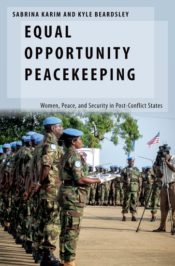 The United Nations first started collecting and releasing data on the proportions of women in peacekeeping missions in 2007 (for women in the military) and 2009 (for women in the police). Based on Figure 1, we can see that there has been a steady increase in the numbers of female peacekeepers in the police and to some extent, the military. In addition to these improvements, three missions—the UN Mission in Liberia (UNMIL), United Nations Stabilization Mission in Haiti (MINUSTAH), and The United Nations Organization Stabilization Mission in the Democratic Republic of the Congo (MONUSCO) have received all-female formed police units. Countries that notably contribute higher proportions of women in police include the Dominican Republic, Zimbabwe, Cameroon, Burundi, and Belarus; and in the military, they include South Africa, Nigeria, Ghana, Ethiopia, and Uruguay.

While there have been some improvements in the numbers, women remain a distinct minority in peacekeeping missions. Much more, women are especially underrepresented in some key missions. Women are more likely to deploy to the safest missions, not ones where they may be most needed. Specifically, female military personnel are more likely to deploy to missions with fewer instances of wartime sexual violence, higher economic development, and lower numbers of battle-related deaths. Within missions, women are often prohibited from leaving their bases to engage with the community. These restrictions and barriers pose a problem for peacekeeping effectiveness because the UN has suggested that female peacekeepers provide added benefits to operations. Specifically, the UN argues that female peacekeepers empower women in the host communities, address specific needs of female ex-combatants, help make the peacekeeping forces approachable to women in the communities, help interview survivors of gender-based violence, mentor female cadets at police and military academies, and interact with women in societies where women are prohibited from speaking to men.

Essential cultural and normative changes can occur at the leadership level, where Special Representatives to the Secretary General, Force Commanders, and Police Commissioners are selected with an eye toward gender equality. It can occur at the recruitment level such that standards are based on qualities in which both men and women excel, as well as standards that incorporate values for gender equality. Commendations within missions (such as promotions, lucrative placements, or medals) can be awarded based on performance on gender equality. Discipline can also be based on such standards. Another way to improve women’s ability to gain access is to provide them with role models and mentors. Moreover, attention to building women’s professional networks would improve their ability to seek advice and gain information in comfortable settings. Finally, training and professionalization for all peacekeepers could be tailored to instill an understanding in the link between gender equality and mission effectiveness. The culmination of these changes constitutes equal opportunity peacekeeping.

On International Women’s Day it is important to recognize women’s contributions around the globe, but also to reflect on what more can be done to close the gender gap in all spheres of life, including in peacekeeping.

Sabrina Karim is an Assistant Professor of Government, Cornell, and U.S. Foreign Policy and International Security Fellow at Dartmouth College. Kyle Beardsley is an Associate Professor in Political Science at Duke University. They are the authors of Equal Opportunity Peacekeeping: Women, Peace, and Security in Post-Conflict States.