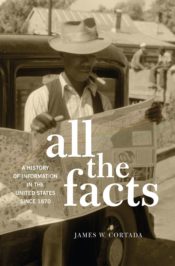 All the Facts: A History of Information in the United States since 1870

President Donald Trump’s administration is accused of disseminating “fake news” to the shock of the media, tens of millions of Americans, and to many others around the world. So many people think this is a new, ugly turn of events in American politics. What does American history have to say about this?

When George Washington announced that he did not want to serve as president for a third term, Thomas Jefferson let it be known that he was interested in the job. That was in 1796. Vice President John Adams, too, wanted it, and eventually became the second president with Jefferson as vice president. During Adams’ term, Jefferson encouraged the president’s political enemies to speak ill of him so in 1800, when Jefferson again wanted to try for the presidency, a hostile political environment existed. That election is considered to be the first in which “fake news” became part of the American political scene.

A newspaper critical of Jefferson assured readers that he suffered, “great and intrinsic defects in his character,” information an anonymous source close to the vice president had leaked to the press. Jefferson’s supporters let it be known that Adams wanted to be king of the United States by trying to marry off one of his sons to a daughter of English King George III, a move blocked by George Washington who intervened just in time to stop it, or so the story goes. The political conversation remained riddled with false facts, with newspapers reporting, for example, that if Jefferson were president, “Murder, robbery, rape, adultery, and incest will be openly taught and practiced,” that the country would be “soaked with blood, and the nation black with crimes.” Political parties owned newspapers in those days. There was no independent media. In the eighteenth and nineteenth century it was more like FOX and MSNBC—heavily partisan.

The presidential election of 1828 is considered one of the nastiest in American history. War of 1812 military hero General Andrew Jackson was running against John Quincy Adams, son of John Adams. Jackson’s rivals accused him of murdering prisoners during a military campaign in 1815. The truth was actually that Jackson had ordered their execution after the men’s officers concluded they had deserted their posts, which was against military law. Their execution was the punishment provided by law.

Jackson had married a teenager, Rachel, while she was still married to her first husband, the couple thinking that her divorce was final; eventually it was resolved and he remarried her in 1794 to make it legal. But his opponents ignored all that and instead accused him of adultery, she of bigamy. Jackson’s supporters reported that Adams, while ambassador to Russia, procured for the czar a young girl for sex, along with other women, to explain why he had been a successful diplomat in Moscow. The press also reported another falsehood: that he had the government pay for a billiards table in the White House, which, in fact, he paid for. And so it went.

Things calmed down a bit in American politics during the second half of the 1800s, although periodically in the first half of the next century more “fake news” occasionally floated around. The calmest period came in the post-World War II era, which is why, perhaps, Americans and Europeans have been so shocked by recent events. Forgotten by all, however, is that in state elections all through the nineteenth and twentieth centuries fake news always circulated as facts.

What history teaches us is that American politics seemed to generate more fake news than almost any other activity of the nation, with false advertising coming in at a close second. That reality may help account for why Americans and Europeans are so critical of the dishonesty of politicians. In the United States, politicians have always been considered ethically challenged and too often untruthful, far more than most other professions. Combined with a perception that “Washington never gets anything done,” especially with respect to the US Congress, and we begin to see where “fake news” fits in.

Over the course of two centuries, Americans came to expect politicians and their allies to disseminate fake news, but there were also enough voters who accepted these false facts as true to affect election results. For them, the validity of facts was in the eye of the beholder. “Alternative facts” have been a feature of the American landscape for a long time. Politicians were not alone in using them.

Cigarette manufacturers announced their “scientific research” showed smoking was harmless, while chemical companies proclaimed that DDT was harmless to people. Facebook, run by young executives with understandably little grasp of history, are learning that fake news has always been around and—to their credit—are taking steps to figure out how to winnow them out of their website. It is a mission that generations of news reporters attempted to achieve. In both politics and advertising, enough people accepted “fake news” to justify the practice of misleading political commentary and what had already been dubbed “false advertising” decades ago. So, welcome to a new round of “fake news.”

Featured image credit: “President’s Levee, or all Creation going to the White House From Library of Congress” by Robert Cruickshank as an illustration in the The Playfair papers. Public Domain via Wikimedia Commons.

James W. Cortada is a Senior Research Fellow at the Charles Babbage Institute at the University of Minnesota and the author of several dozen books on the history and use of information in business and information technology. His most recent book is All the Facts: A History of Information in the United States since 1870.